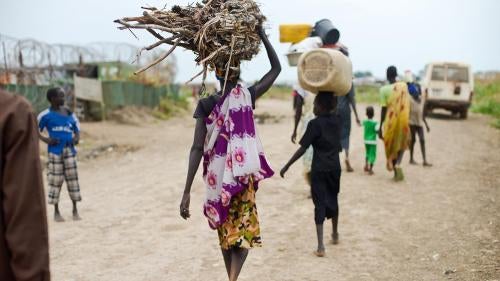 South Sudan’s civil war, which began in December 2013, continued in 2015 with serious abuses of civilians by both warring parties. Killings, rape, and destruction and pillage of civilian property were widespread, especially during a massive government offensive in Unity state that began in mid-2015. A tenuous peace agreement signed in late August raised hopes of an end to the fighting, which has displaced some 2.2 million people from their homes and plunged much of the population into humanitarian crisis.

The conflict began in December 2013 when soldiers loyal to President Salva Kiir, a Dinka, and those loyal to former Vice President Riek Machar, a Nuer and now the rebel leader, fought in the capital, Juba, following months of growing political tensions. Despite widespread atrocity crimes committed by both sides, the peace deal, if implemented, would put the two men in charge of a transitional government for three years, after which national elections will be held.

A painful history of unaddressed war crimes and human rights abuses committed during decades of conflict in South Sudan helped fuel the atrocities. No serious efforts have been made by either side to end abuses committed by their forces. The peace deal promises a hybrid court established by the African Union Commission to provide accountability for international crimes committed during the recent conflict.

A decline in fighting in early 2015 ended abruptly in April, when the government launched one of the biggest and most abusive offensives of the conflict. Government forces and allied militia fighters killed  hundreds of people and burned homes and other civilian property in an offensive in opposition-held areas of Unity state, forcing at least 100,000 people to flee their homes. The forces pillaged hundreds of thousands of cattle, as well as other food and property, contributing to severe hunger in an area that humanitarian aid groups have warned could experience famine. Rape of women, including gang rapes, was a common tactic used during the offensive, and many hundreds of other women were beaten, forced to porter goods looted from their own villages, or were abducted by the attacking forces.  Attacks, rape, and killings of civilians continued into October.

The deliberate attacks on civilians and civilian property during the offensive amount to war crimes, and the killings and rapes may also constitute crimes against humanity.

Use and Recruitment of Child Soldiers

Opposition forces also continued to recruit and use hundreds, probably thousands of children in Unity state. In Upper Nile state, Johnson Olony recruited children in and around the Malakal area in early 2015. Olony fought alongside government forces until April when he defected and later joined the opposition.

Over 1,500 children who had fought under Jonglei state’s David Yau Yau in his 2012-3 insurgency against the government, separate from the recent conflict, were released from barracks in early 2015 following a peace agreement between his rebel group and the government. Yau Yau and his commanders have not been investigated for using child soldiers.

Since the beginning of the conflict, South Sudan’s National Security Service (NSS) and military intelligence detained hundreds of men for alleged connections with opposition forces, some for as long as a year, often in inhumane conditions.

Most detainees were beaten and many tortured. None of the detainees was allowed access to a lawyer or judge. Former detainees held in the NSS Riverside detention site in Juba were held in dark, unbearably hot rooms. Detainees held by military intelligence  in Eastern Equatoria and in Juba were tortured including with pliers, suffocation with a plastic bag, or jets of water directed at their faces.

At least three men were victims of enforced disappearances, including two members of Lakes state parliament who were forcibly disappeared for many months after being detained in police custody before eventually being released in August 2015.

The NSS continued to intimidate and detain journalists, further tightening an already restrictive media environment. In early August 2015, NSS officers shut down two newspapers, Al Rai and The Citizen, and an organization producing radio programs. The print run of another newspaper, the Daily Nation, was seized in December 2014 and shut down in January 2015. President Kiir and Information Minister Michael Makuei threatened journalists publicly, and the minister threatened to shut down the UN radio Miraya FM.

In August 2014, journalist Peter Julius Moi was assassinated days after President Kiir publicly threatened journalists. Another journalist, Clement Lochio, last seen in military detention, has been forcibly disappeared. Two more journalists were arrested by MI officers and held in military detention in 2015, one for a month because he interviewed, on the government South Sudan TV, a politician at odds with with the army’s chief of staff.

In February, NSS officials shut down the elections for the South Sudan Bar Association in Wau and Juba, allegedly because the organization had not received advance permission from the NSS. A journalist who took photographs at the Juba venue was arrested and detained for about 20 hours in a NSS detention site.

NSS officers were given sweeping powers of arrest, search and seizure, and detention without any clear judicial oversight in a National Security Service Act passed by South Sudan’s parliament in mid-2014, amid much controversy and procedural confusion.

President Kiir said he would not sign the bill, but in February 2015 the justice minister declared that the bill had become law because the president had not returned it to parliament or provided reasons for withholding his signature for more than 30 days.

In 2013, South Sudan’s parliament passed a bill to ratify both Optional Protocols to the CRC on the involvement of children in armed conflict and on the sale of children, child prostitution, and child pornography. However, neither instrument had been deposited with the UN at time of writing.

The government and opposition leadership have not made any serious effort to hold abusive forces to account. Machar promised to investigate a massacre in Bentiu town, Unity state, by his rebel forces in April 2014, but no findings had been made public at time of writing. Two government reports, one by the police and one by the army, about the involvement of security forces in widespread killings of Nuer men in Juba in December 2013 had also not been made public.

President Kiir also initiated a national investigation into human rights abuses in early 2014; that report had also not been made public at time of writing.

In December 2013, the African Union (AU) authorized a commission of inquiry to document abuses and offer recommendations on justice and reconciliation. The report, made public in October 2015, highlighted the ethnic nature of abuse in the conflict, which it said included war crimes and possible crimes against humanity.

The August 2015 peace deal promises a hybrid court to be established by the AU Commission to investigate and prosecute international crimes committed in the conflict. Details about the court, including where it will be located and how it will be set up, have yet to be decided. The peace deal also mandates a Commission for Truth, Reconciliation and Healing and a Compensation and Reparation Authority.

The Intergovernmental Authority on Development (IGAD) continued to mediate peace talks in Addis Ababa, and teams of monitors on the ground reported on violations of a January 2014 cessation of hostilities agreement between the two sides. Uganda, an IGAD member, continued to deploy soldiers in South Sudan to shore up the government.

China, the European Union, Norway, the United Kingdom, and the United States continued to support the peace process.

In early March 2015, the UN Security Council adopted a resolution that established a sanctions regime for South Sudan. A sanctions committee has authority to impose travel bans and asset freezes on individuals and entities found responsible for human rights abuses, violations of international humanitarian law, or the recruitment of child soldiers.

The UN Mission in South Sudan (UNMISS) continued to shelter tens of thousands of civilians forced to flee their homes because of attacks by forces from both sides. UNMISS peacekeepers struggled to protect civilians outside of their bases.