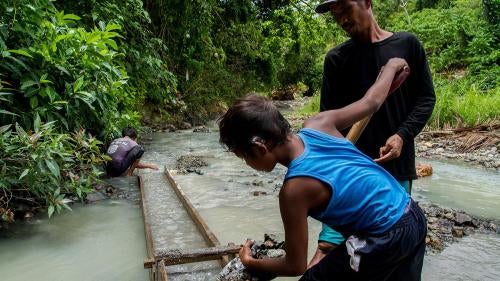 President Benigno Aquino III’s final full year in office was marked by numerous instances of local intimidation and violence—reminiscent of past election periods—by often unidentified assailants against politicians, their supporters, and outspoken voices in media and civil society groups. The Philippine government took little effective action to hold to account those responsible, including security force personnel.

Aquino’s six-year term ends in June 2016. In 2014, he brokered a peace process on the southern island of Mindanao that seeks to bring a measure of autonomy to the region’s Muslim minority. His term saw a sharp reduction in extrajudicial executions compared to the prior administration of Gloria Macapagal-Arroyo, though local government-backed “death squads” remained a major problem. His administration has also seen some measure of success in enforcing the reproductive health law passed in 2012. In addition, Aquino deserves some credit for a Supreme Court initiative that addresses the massive backlog of criminal cases, which condemns suspects to often years-long pretrial detention.

Overall, however, Aquino’s record on human rights has been disappointing due to the failure to address impunity for the government’s rights violations. Among the reasons were lack of political will to investigate and prosecute abuses by state security forces; a corrupt and politicized criminal justice system; and a traditional “patronage politics” system that protects officials and security forces.

Data compiled by indigenous peoples’ advocacy groups indicate that assailants often linked to the military or paramilitary groups killed at least 13 tribal leaders and tribal community members in the first eight months of 2015.

On August 26, soldiers raided the tribal village of White Kulaman in Bukidnon province and arrested 17 residents, accusing them of being rebels belonging to the communist New People’s Army (NPA). On September 1, gunmen allegedly linked to a paramilitary group killed three tribal leaders in Lianga town, Surigao del Sur province. The paramilitary group Alamara was implicated in numerous attacks during the year, including nine killings in the town of Cabanglasan.

The killings in Cabanglasan followed the evacuation of hundreds of tribal residents from the adjacent Davao del Norte province after the Philippine military deployed in the region to fight NPA rebels.

The United Nations High Commissioner for Refugees has determined that the large-scale military deployment in areas heavily populated by indigenous peoples has contributed to the displacement of 243,000 since January. Military activity against suspected NPA members displaced hundreds of students in several tribal schools in four provinces in Mindanao.

Similar attacks and displacement by the military in tribal domains have occurred in other provinces in the southern Philippines on the grounds of combating the NPA insurgency, as well as acting as paid security for mining and plantation operations.

Paramilitary groups, some of them funded and supplied by the military, are frequently deployed as “force multipliers” against insurgents in these areas, spawning abuses against the local population.

Hazardous child labor remained a serious concern in 2015. Thousands of children worked in small-scale gold mining at great risk. They dived for gold in underwater mines, dug gold in underground pits, and processed gold with mercury. Child labor laws are poorly enforced. In March, the government banned underwater mining and mercury use for gold processing, but did little to implement it.

In November, authorities rounded up hundreds of poor and homeless children, along with street vendors and homeless adults, and detained them in social welfare facilities in Manila in an attempt to “beautify” the capital for the Asia-Pacific Economic Cooperation summit. The government denied that the arrests were meant to clear the streets of Manila of vagrants. Many of these street dwellers were back on the streets a day after the summit.

2015 was another deadly year for Filipino journalists. Eight journalists were killed in the first ten months of the year. August was a particularly bloody month as unidentified gunmen killed three journalists in a span of 10 days.

Victims included Cosme Maestrado, a hard-hitting commentator for DXOC radio station, who was shot dead in front of a shopping center in Mindanao’s Ozamiz City on August 28. Eight days earlier, unidentified gunmen killed another broadcaster, Teodoro Escanilla of radio station DZMS, in Sorsogon, a province south of Manila. On August 18, unidentified gunmen killed Gregorio Ybanez, a newspaper publisher, in Mindanao’s Tagum City. At time of writing, police had not arrested suspects in any of these killings.

Task Force Usig, a unit created by the Philippine National Police in 2007 to investigate these murders, has not been able to fully investigate most of these killings, mainly due to the lack of witnesses willing to publicly identify themselves and share information with police.

Although the task force has secured the conviction of suspects in eight of the 51 cases it has documented since 2001—a conservative figure since Usig does not classify videographers and producers as “journalists”—no one responsible for planning and executing such attacks has been arrested or convicted.

Summary killings are rampant in several urban areas across the Philippines. Popularly known as “riding-in-tandem” killings because they often involve gunmen on motorcycles, Philippine media report such incidents on an almost daily basis.

Many of these killings have been by guns for hire, contracted by local politicians or criminal syndicates, often with the complicity of police to target petty criminals, drug dealers and others.

The Justice Department began an investigation into the “death squad” in Tagum City Mindanao in 2014 after it was reported on by Human Rights Watch and announced that they would file charges against the former mayor and several others. However, at time of writing, the Department of Justice had not filed a complaint, and the suspects had not been detained or brought to trial.

Rodrigo Duterte, the mayor of Davao City, has popularized the perception of death squads as valuable tools of “swift justice” against crime. The Aquino government has failed to investigate Duterte’s claims of masterminding the Davao City death squad. Duterte announced his presidential election bid in 2016 on a platform espousing vigilante justice as a crime control technique.

Nearly 300 leftist activists, human rights defenders, and other alleged NPA supporters have been killed since Aquino took office in 2010, with 65 killed in the first  10 months of 2015, according to domestic human rights groups. Killings implicating the military and paramilitary groups almost never result in prosecutions.

The United States, which in 2009 conditioned some financial military aid to the Philippines on improvements of the human rights situation, resumed aid in 2015 as part of its so-called Asia pivot. That strategy involves engaging the Philippine navy in particular as part of a US counter-strategy to China’s incursions into the West Philippine Sea (or South China Sea).

The US, Japan, Canada, and the European Union have continued providing capacity-building assistance, notably to improve local governance and bureaucracy, fight corruption, and institutionalize human rights monitoring. Key beneficiaries of this aid are  Muslim areas in the southern Philippines.