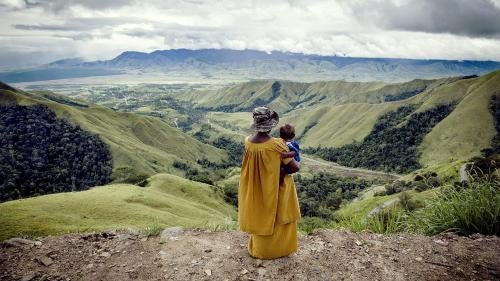 In 2015, Papua New Guinea (PNG) celebrated 40 years of independence. Despite PNG’s current extractives-led boom, an estimated 40 percent of the country lives in poverty. Pressing issues include gender inequality, violence, corruption, and excessive use of force by police, including against children. Rates of family and sexual violence are among the highest in the world, and perpetrators are rarely prosecuted.

PNG is one of the most dangerous places in the world to be a woman or girl, with an estimated 70 percent of women experiencing rape or assault in their lifetime. While such acts have long been criminalized and domestic violence was specifically proscribed under the 2013 Family Protection Act, few perpetrators are brought to justice.

The government has started establishing police Family and Sexual Violence Units (FSVUs) and hospital-based Family Support Centres, and initiated a process to develop a gender-based violence strategy. However, the Family Protection Act has not yet been implemented. There is much work remaining to ensure appropriate law enforcement responses and comprehensive access to services for victims of family violence.

Police and prosecutors are very rarely prepared to pursue investigations or criminal charges against people who commit family violence—even in cases of attempted murder, serious injury, or repeated rape—and instead prefer to resolve them through mediation and/or the payment of compensation.

Police also often demand money (“for fuel”) from victims before taking action, or simply ignore cases that occur in rural areas. There is also a severe lack of services for people requiring assistance after having suffered family violence, such as safe houses, qualified counselors, case management, financial support, or legal aid.

Reports continue of violent mobs attacking individuals accused of “sorcery” or “witchcraft,” the victims mostly being women and girls. In May, a group of men in a remote part of Enga province killed a woman after she was accused of “sorcery.” In August, three women and a man were also attacked in Mendi in the Southern Highlands province following sorcery accusations.

Sorcery accusations are often accompanied by brutal attacks, including burning of homes, assault, and sometimes murder. The risks to people accused of sorcery are so severe that the main approach used by nongovernmental organizations seeking to help them is to permanently resettle them in another community.

In 2015, Prime Minister Peter O’Neill continued to weaken the country’s most successful anti-corruption agency, Task Force Sweep, by starving it of funding. Task Force Sweep was briefly disbanded in 2014 when its investigations targeted the prime minister. A court reinstated the agency, but it has not received any government funding since 2013.

In October, the government sought to suspend Chief Magistrate Nerrie Eliakim, who had issued an arrest warrant against Prime Minister O’Neill on corruption charges in 2014. Attorney General Ano Pala was charged with conspiring and attempting to pervert the course of justice, and with abuse of office. According to police, Pala allegedly tried to frustrate their efforts to pursue official corruption charges against O’Neill.

In 2013, PNG expanded the scope of crimes eligible for the death penalty and signaled its intention to resume executions. In May, Prime Minister O’Neill publicly announced that the death penalty was under review, which seemed to suspend all pending executions. At time of writing, 13 prisoners remain on death row.

Authorities launched a National Disability Policy in May 2015, but people with disabilities are often unable to participate in community life, go to school, or work because of lack of accessibility, stigma, and other barriers associated with disability.

Numerous obstacles prevent people with disabilities from being able to leave their homes, including inaccessible infrastructure and the fact that third parties are often put in charge of even basic decisions about their lives. Access to mental health care is limited, and traditional healers are the only option for many people with psychosocial disabilities.

Extractive industries remain an important engine of PNG’s economic growth, but continue to give rise to serious human rights concerns and environmental harm. In 2014, controversy raged around the environmental impacts of the Ok Tedi mine, and violent clashes erupted around the controversial Ramu Nickel project.

Along with other steps, Barrick responded by rolling out a compensation scheme paying out claims to more than 100 women in 2015. The company has commissioned an assessment to evaluate the impact of this remedy program.

More than 930 asylum seekers and refugees are currently detained indefinitely in poor conditions at a detention center on Manus Island, which holds asylum seekers transferred by Australia for refugee status determination and resettlement in PNG. Some have been held at the center for more than two years. Since January 2015, 46 men recognized as refugees have been transferred to a transit center, but are prevented from leaving Manus Island and cannot work or study.

Human rights organizations and media are regularly denied access to the detention center. PNG ratified the 1951 Refugee Convention with some reservations, but has never adopted a formal policy for the integration of refugees within PNG.

The protracted and indefinite nature of detention is causing significant mental health problems for those on Manus Island, including depression and anxiety. In January, police detained a large group of asylum seekers for several weeks in crowded cells in the local jail and police lockup following a hunger strike at the detention center. Many of the asylum seekers said the jail experience was traumatizing for them, reporting that at least two asylum seekers had attempted suicide.

In August, following the deportation of two Iranian asylum seekers to Iran, PNG’s Supreme Court ordered an interim injunction to stop any more forced removals. In 2015, lawyers mounted a new challenge with the Supreme Court on the constitutionality of detaining asylum seekers on Manus Island, arguing it infringes their right to liberty, freedom of movement, and access to legal representation.

Police abuse continues to be reported with little accountability even for fatalities or egregious physical abuse. In January 2015, police killed two market vendors in Port Moresby when firing indiscriminately into a crowd after a dispute between vendors and local council officials. At time of writing no one had been arrested for the shooting.

Assistant Commissioner of Police Jerry Frank is reported as having acknowledged that although there is reason to believe police are responsible, they “don’t know which ones.” Prime Minister O’Neill condemned the use of “unacceptable excessive force,” and sacked then-Police Commissioner Geoffrey Vaki, in part for “a litany of cases of police brutality” under his watch. In September, the Ombudsman Commission signed a Memorandum of Agreement with the police force to oversee investigations into police complaints.

Members of PNG’s paramilitary police units (Mobile Squads), detention center staff, and local residents were implicated in excessive use of force in quelling protests in February 2014 at the Manus Island detention center. During the incident, at least 51 detainees sustained injuries and one detainee was beaten to death. PNG Deputy Police Commissioner Simon Kauba denied any involvement of police in the violence. An Australian Senate inquiry found that the “mobile squad did not simply fire warning shots into the air, but rather fired dangerously into the centre, possibly directly at transferees.” Two staff working at the center are on trial for the murder of Iranian asylum seeker Reza Barati, but no one else has been held to account.

The PNG criminal code outlaws sex “against the order of nature,” which has been interpreted to apply to consensual same-sex acts, and is punishable by up to 14 years imprisonment. Gay asylum seekers on Manus Island have reported being shunned, sexually abused, or assaulted by other men. Some gay asylum seekers are reported to have refused to participate in the refugee status determination process or to move to the transit center because they are fearful of being prosecuted under PNG’s laws and are concerned for their safety.

At time of writing, the Australian Senate was undertaking an inquiry into the delivery and effectiveness of aid in PNG, with concerns raised that corruption is hampering Australia’s development objectives. In July, PNG Prime Minister O’Neill announced that advisors from foreign governments would no longer be able to work in the PNG government as of January 1, 2016.

In September, PNG hosted the Pacific Islands Forum Leaders Meeting. In the lead-up to the meeting, O’Neill spoke out against what he called oppression of the indigenous Melanesian population across the border from PNG in the Indonesian provinces of Papua and West Papua, and called on Indonesia to fulfill the promise of its former president, Susilo Bambang Yudhoyono, to reduce the number of troops stationed in the region.