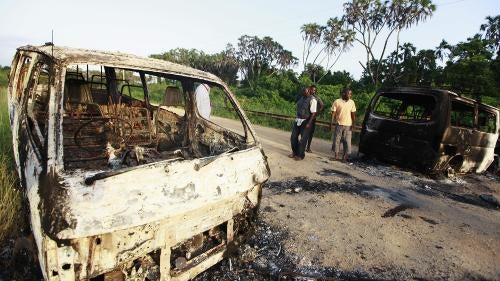 Kenya’s human rights environment faced serious challenges in 2015 as the security crisis escalated. Persistent deadly attacks by Al-Shabaab, the Somalia-based Islamist armed group, culminated in the April 2 massacre of 148 people, including 142 students, at Garissa University in the northeast. The government responded to Al-Shabaab attacks with efforts to expand police and security agency powers, and curtail basic rights through new legislation. Government policies have targeted human rights organizations for closure, tried to stifle media, and threatened refugee communities with forced returns to Somalia.

Security forces continued to be implicated in extrajudicial killings, torture, disappearances and arbitrary detentions, particularly during counterterrorism operations in Nairobi, Mombasa, the coast and in the northeast, and rarely faced investigations or prosecutions.

At least 28 bills necessary to implement the 2010 constitution had not been passed by the five-year deadline on August 27. The constitution was negotiated after the 2007-2008 post-election violence as key in addressing past injustices. There has been no tangible progress on accountability for crimes committed during the post-election violence, which left at least 1,100 dead and 650,000 displaced.

Key security sector, land, and accountability reforms identified in 2008 as crucial to address Kenya’s political crisis have also not been implemented. Throughout the year, human rights activists and civil society groups reported harassment and threats for their work on justice and accountability.

Suspected Al-Shabaab fighters targeted and killed at least 226 unarmed people between November 2014 and July 2015, along the coast and in the northeast. During three separate attacks on quarry workers and on a bus in Mandera county and in another attack on Garissa University, Al-Shabaab fighters singled out and killed those who could not recite an Islamic creed.

Following alleged Al-Shabaab attacks in Lamu and Tana River counties in June and July 2014, security officers from multiple agencies raided communities, beating, harassing and extorting money from residents. Hundreds of predominantly Muslim and ethnic Somalis were targeted and detained without charge for periods well beyond the 24-hour limit set by Kenyan law.

After Al-Shabaab’s massacre in Garissa in April 2015, the military and police were again implicated in kidnapping, killings, and disappearances of terrorism suspects in Garissa, Wajir and Mandera, in northeast Kenya.

There have been no investigations into at least 10 cases of extrajudicial killings and other cases of disappearance of terrorism suspects by the Anti-Terrorism Police Unit (ATPU) in Nairobi in 2014.

In December 2014, the ruling Jubilee administration proposed the Security Laws Amendments that expanded police stop and search powers, introduced new criminal offences with harsh penalties, limited the rights of defendants, and restricted freedoms of expression and assembly. The High Court in February struck down eight potentially repressive clauses as unconstitutional. However, other provisions were left intact, such as allowing pretrial detention of terrorism suspects for up to 90 days with court orders.

Kenya has made no progress on accountability for post-2007 elections violence, including for sexual violence, but authorities continued with attempts to undermine the International Criminal Court (ICC) cases on Kenya by seeking to politicize the proceedings.

Many women and girls who survived sexual violence after the 2007 elections have serious physical injuries, illnesses, and psychological disorders and require medical care, financial, and psychosocial support.

In December 2014, the ICC prosecutor withdrew crimes against humanity charges against President Uhuru Kenyatta due to insufficient evidence that the prosecutor blamed on noncooperation by Kenyan authorities and widespread witness interference. Kenyatta’s deputy, William Ruto, and former radio journalist Joshua arap Sang are standing trial on similar charges. Victims in the Kenyatta case are seeking to challenge the prosecution’s decision to suspend investigations.

Both sets of Kenyan cases at the ICC have been dogged by claims of witness tampering. The trial chamber in the Ruto and Sang case found sufficient evidence of tampering to admit into evidence the prior statements of six witnesses who subsequently refused to cooperate with the prosecution, setting off a new effort in parliament to seek Kenya’s withdrawal from the ICC. In early September, the court unsealed arrest warrants against two Kenyans on accusations of attempting to bribe prosecution witnesses in the case against Ruto and Sang. The arrest warrants against lawyers Paul Gicheru and Philip Kipkoech Bett come two years after an arrest warrant was unsealed against journalist Walter Barasa on similar charges. There has not been any progress on investigations by Kenyan authorities into the late 2014 disappearance and death of Meshack Yebei, who was claimed as a witness by Ruto’s defense team.

In late 2014, an ICC trial chamber indicated that the government of Kenya had not met its obligations to cooperate in the prosecution’s investigations in the Kenyatta case but decided not to send a formal finding of non-compliance to the court’s Assembly of States Parties for enforcement. The Office of the Prosecutor appealed the decision, and in August 2015, the Appeals Chamber referred the matter back to the Trial Chamber for review.

In March, President Kenyatta said that a report of the Office of Director of Public Prosecutions indicated that, due to lack of evidence, it would not be possible to prosecute cases arising out of the 2007-2008 post-election violence and that “restorative” approaches should be used instead.

Kenyatta issued a general apology for human rights violations committed by the government and instructed the treasury to set aside Ksh10 billion (US$9.5 million) over the next three years for victim reparations for past injustices dating back to 1963, including victims of the recent post-election violence, as recommended in the report of the Truth, Justice and Reconciliation Commission.

Although the Independent Policing Oversight Authority (IPOA) has made some progress with groundbreaking investigations into reports of police abuses since it was founded four years ago, Jubilee party legislators have called for its disbandment, accusing it of inhibiting counterterrorism efforts with demands for police accountability.

The Kenya National Commission on Human Rights, Commission on Administrative Justice and IPOA lack adequate financial support to achieve their mandates. Their reports and recommendations on human rights abuses are largely ignored by the key government officials including the president.

Reports of intimidation and harassment of nongovernmental organizations (NGOs) and activists continued in 2015. In April, the Inspector General of Police included two prominent human rights groups, Haki Africa and Muslims for Human Rights (MUHURI)–known for their work in exposing security forces’ abuses at the coast–in a list of 86 individuals and organizations alleged to have terrorism links. The government also froze the organizations’ bank accounts, paralyzing activities. Kenya Revenue Authority raided their offices on April 20 and 21, seizing documents and hard drives in connection with possible tax evasion investigations. In June, a court cleared the organizations of any links to terrorist activity, but their bank accounts remained frozen. They only managed to access their bank accounts after a court order in November.

The government also froze the organizations’ bank accounts, paralyzing activities. Kenya Revenue Authority raided their offices on April 20 and 21, seizing documents and hard drives in connection with possible tax evasion investigations. In June, a court cleared the organizations of any links to terrorist activity. Their bank accounts remained frozen at time of writing, despite a court order in November that the accounts should be unfrozen.

The Jubilee party continued attempts to introduce tough legislative and administrative measures seemingly aimed at controlling NGOs. In 2014, the administration proposed amendments to the Public Benefits Organizations (PBO) Act, 2013, a bill seeking to amend the PBO Act to increase executive control over the public benefits authority. Parliament rejected the amendments in December that year.

In 2015, the government created a task force to gather public views to begin another process of amending the PBO Act. The Nongovernmental Organizations Coordination Board, the government regulatory body, has been drafting fresh amendments since July 2015. In October, the board said it would deregister more than 900 NGOs, alleging failure to comply with regulations and links to terrorism, but the decision was later suspended by the minister overseeing the board to allow more time for the organizations to comply.

Hostile and inflammatory rhetoric against Somali refugees from public officials increased, particularly in the wake of the April attack in Garissa. Authorities have, without any clear evidence, repeatedly blamed Somali refugees for security challenges facing the country.

On April 11, Deputy President William Ruto gave the United Nations an ultimatum to close Dadaab refugee camp within 90 days or the government would shut it down. Kenya backed down on the threat after a visit by the UN High Commissioner for Refugees in early May.

In April, the High Court overturned the NGO board’s refusal to register NGLHRC on the grounds that the penal code “criminalizes gay and lesbian liaisons.” The victory followed three 2014 court judgments that recognized rights for transgender and intersex people. Deputy President Ruto responded to the ruling by saying, “There is no room for gays and those others in Kenya.” In a rare comment on LGBT rights, President Kenyatta said in July that “gay rights are a non-issue.”

Anti-Western rhetoric by Kenyan public officials declined, and relations between Kenya and Western countries improved after the ICC dropped crimes against humanity charges against President Kenyatta in December 2014. Previously, President Kenyatta and Deputy President Ruto had claimed that Western governments supported the ICC cases against them.

Despite having made little progress on accountability for the post-election violence, international pressure on the Kenyan government to do so has diminished.

In July, US President Barack Obama visited Kenya for the first time as president, a significant sign of improved dialogue between the two countries. Obama used the opportunity to voice concerns about human rights abuses and simultaneously pledged new security sector support worth $65 million to several African countries, including Kenya. He also hosted a meeting with civil society and emphasized the importance of not suppressing independent voices.

Kenya did not accept critical recommendations that several countries made during the examination of its rights record under the Universal Periodic Review at the Human Rights Council in June, such as working to eliminate all forms of torture, ill-treatment, and disappearances of persons.