The government of President Yahya Jammeh, in power since a 1994 coup, frequently committed serious human rights violations including arbitrary detention, enforced disappearance, and torture against those who voiced opposition to the government. The repression and abuses created a climate of fear within Gambia, generating increased attention from the international community.

State security forces most frequently implicated in violations were members of the National Intelligence Agency (NIA), a paramilitary group known as the “Jungulers,” and the Gambian Police Force. Those targeted included journalists, political opponents, and lesbian, gay, bisexual, and transgender (LGBT) people, many of whom fled Gambia out of fear.

Some of the worst abuses followed a failed coup attempt on December 30, 2014. In the days that followed, dozens of family members and friends of the alleged plotters were rounded up and held incommunicado, some for months. Three alleged coup plotters died in suspicious circumstances after being captured. In February 2014, a secret court martial, violating due process rights, convicted six soldiers of treason-related offenses. On March 30, the court sentenced three of them to death and three to life in prison.

Despite widespread allegations of serious abuses committed by the security forces over the last two decades, no members of the state security or paramilitary groups are known to have been convicted or otherwise held to account for torture, killings, or other serious violations.

In July 2015, in an unprecedented act, President Jammeh pardoned and released over 200 prisoners, including many political prisoners. Despite this, many Gambians remained in detention or are feared forcibly disappeared.

Draconian anti-gay legislation and persecution of LGBT people focused global attention on other aspects of the government’s human rights record. Gambia’s partners, notably the European Union, the United Nations, the United States, and the Economic Community of West African States (ECOWAS), were increasingly willing to denounce or take steps to address the rights climate, including by issuing public statements and conditioning assistance.

In January 2015, shortly after the attempted coup, Gambian authorities forcibly disappeared dozens of friends and relatives of the alleged coup plotters, including elderly parents and a 16-year-old boy. They were held incommunicado, deprived of contact with family, and denied access to lawyers for up to seven months.

The government refused to acknowledge the whereabouts or even the detention of many of them, effectively holding them outside of the protection of the law. A dozen of these family members were released as part of presidential pardons announced on July 22, the anniversary of President’s Jammeh’s 1994 coup.

In the past decade, Gambian security forces have been implicated in dozens of enforced disappearances, including of a journalist, two American-Gambian citizens, and a former army chief, all of whom remain unaccounted for.

Arbitrary arrest and detention by the security services, especially the NIA and the Serious Crimes Unit within the police, continued. Among those arbitrarily detained and held beyond the 72-hour legal limit in 2015 were journalists—including Alagie Abdoulie Ceesay, the manager of Taranga FM radio station—as well as senior civil servants, ministers, and members of the security services. Many of those in detention were subjected to torture and enforced disappearance.

Torture and Other Ill-Treatment

During 2015, as in past years, numerous real or perceived government opponents were subjected to severe torture and other ill-treatment by members of the Gambian security forces and paramilitary groups. Much of the abuse appeared designed to intimidate or secure forced confessions from perceived government opponents, or to punish those who criticize the president or highlight the current administration’s policy failures. 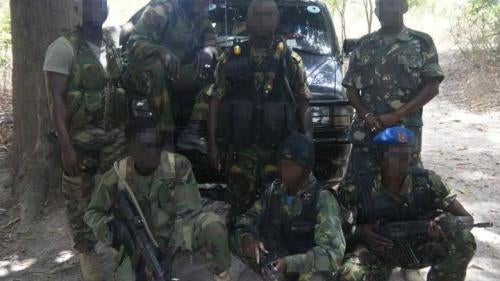 In January, six soldiers implicated in December’s coup attempt and some of their family members were severely beaten while in detention at the NIA. In July, while arbitrarily detained at NIA headquarters for 11 days without charge, journalist Alagie Abdoulie Ceesay was forced to drink cooking oil on several occasions and beaten until he lost consciousness.

Torture methods used included severe beatings with wooden clubs, metal pipes, cables, and electric wires; slicing with bayonets; near suffocation by tying a plastic bag over the head of the victim; trampling with boots; electroshock of body parts, including genitals; and dripping melted plastic bags onto the skin. Many victims were subjected to psychological abuse such as prolonged periods in solitary confinement, mock execution, and repeated threats of torture and death.

Gambians who identify as lesbian, gay, bisexual, or transgender (LGBT), or who are perceived as such, have increasingly become the target of hate speech from the president, as well as of discriminatory laws, arrest and prosecution by the authorities, and sometimes violent abuse in custody.

On October 9, 2014, the government introduced a series of new “aggravated homosexuality” offenses that impose sentences of up to life in prison. The new offenses criminalize anyone having “unlawful carnal connection with any person of the same sex,” where the person commits the offense more than once or is living with HIV, and where the “victim” has a disability. These clauses criminalize and discriminate against LGBT people living with HIV and imply that persons with disabilities cannot consent to sex.

Weeks after the new law passed, state security rounded up dozens of people on suspicion of homosexuality. Several people detained by the NIA were abused and threatened with physical violence in an attempt to force them to provide names of LGBT Gambians. The security services conducted door-to door-searches for suspected homosexuals. In a May 2015 speech, Jammeh said he would “slit the throats” of gay people in Gambia. Two men, detained for over three months at the NIA before being tried for “unnatural acts,” were acquitted in July 2015 for lack of evidence.

In 2015, the authorities continued to persecute journalists for investigating stories critical of the government, exposing human rights abuses, or producing coverage of the opposition in a seemingly favorable light. Since 1994, dozens of journalists have fled Gambia after being arbitrarily detained and often tortured. Since 2004, two journalists have been murdered or forcibly disappeared.

After the December 2014 coup attempt, state security closed down the Taranga FM radio station—regularly the target of such government closures—for four days in January. On August 5, journalist Alagie Abdoulie Ceesay was put on trial for sedition for sending an image on his mobile phone of the president, deemed by authorities to “raise discontent, hatred, or disaffection among the inhabitants of the Gambia.” In August, Al Jazeera journalists were denied permission to film and were reportedly asked to leave the country.

While many private radio and print news outlets operate in the country, editors regularly engage in self-censorship out of fear of being shut down by the government. There is no international media presence in Gambia.

Since 2013, the government has used a series of increasingly repressive laws to muzzle freedom of speech, affecting not only journalists but anyone communicating across any media, including the Internet, social media, telephones, and even in private conversations.

Gambian human rights and pro-democracy groups have very limited space to promote good governance and respect for human rights. Due to a climate of fear and highly restrictive legal and administrative frameworks, very few nongovernmental organizations operate freely in the country. Those that do avoid monitoring and reporting on rights abuses.

Two United Nations special rapporteurs conducted missions to Gambia in November 2014 to investigate allegations of torture and ill-treatment, in addition to extrajudicial and unlawful killings. Both rapporteurs issued highly critical reports stating that Gambia is characterized by widespread disregard for the rule of law, infringements of civil liberties, and the existence of a repressive state apparatus. They said they encountered an atmosphere of fear and were denied access to detention centers, including the security wing of Mile 2 Prison in Banjul.

In March 2015, Gambia rejected many recommendations from the UN Human Rights Council in Geneva during its last Universal Periodic Review, including abolishing the death penalty, decriminalizing homosexuality, and removing restrictions on freedom of expression.

In February and March 2015, the UN Working Group on Enforced or Involuntary Disappearances transmitted seven cases under its urgent action procedure to the Gambian government on behalf of seven people abducted in January 2015, allegedly by the NIA.

In December 2014, EU assistance to Gambia was frozen over concerns about the country’s dire human rights situation. In June 2015, Gambia cut ties with the EU, declaring its representative in Banjul persona non grata. However, plans for resuming EU aid were under negotiation at year’s end.

The Banjul-based African Commission on Human and Peoples’ Rights adopted a resolution in February on the deteriorating rights situation in Gambia, calling on the government to invite the commission to conduct a fact-finding mission into events after the December 2014 attempted coup.

In May 2015, US National Security Advisor Susan Rice said she was “deeply concerned about credible reports of torture, suspicious disappearances and arbitrary detention at the government’s hands,” adding that the US government was “reviewing what additional actions are appropriate to respond to this worsening situation.”

In 2015, ECOWAS pressed Gambia to improve its human rights record and to establish a credible human rights commission.