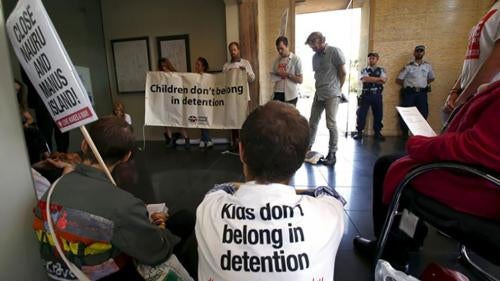 Australia has a solid record of protecting civil and political rights, with robust institutions and a vibrant press and civil society that act as a check on government power. However, the government’s failure to respect international standards for asylum seekers and refugees continues to take a heavy human toll.

In 2015, Australia’s practices of mandatory detention of asylum seekers, abuses related to offshore processing, and outsourcing of refugee obligations to other countries were heavily criticized by United Nations experts, foreign governments, and even some Australian government-funded inquiries.

However, senior government officials dismissed such criticism and even attacked and tried to discredit institutions such as Australia’s Human Rights Commission (AHRC) and the UN. The government has also instituted overly broad and vague counterterrorism laws and has done too little to address indigenous rights and disability rights.

As of October 31, 2015, 929 asylum seekers and refugees were detained on Manus Island, PNG, while 621 were in a center on Nauru. Three years after Australia first started sending asylum seekers to PNG, not a single refugee had been resettled. In August, an asylum seeker detained on Manus Island for more than two years was persuaded and paid by Australian officials to return to Syria. He has said he was detained by intelligence officers upon arrival in Damascus, and in October, was injured by shelling.

The immigration department established an independent review of detention conditions in the Nauru center that found evidence that children and adults were sexually and physically assaulted. Thirty-three asylum seekers allege they have been raped or sexually assaulted at the center. A parliamentary senate inquiry found that the conditions on Nauru were “not adequate, appropriate or safe,” and recommended that all children be removed from the center as soon as possible.

An AHRC report into conditions in Australian mainland immigration detention centers and facilities on Christmas Island in February found that mandatory and prolonged detention had profoundly negative impacts on the mental and emotional health and development of children. More than 300 children committed or threatened self-harm in a 15-month period in Australian immigration detention, and 30 reported sexual assault.

Following the report’s release, senior government officials made personal and unsubstantiated attacks on the credibility and integrity of the president of the AHRC, Professor Gillian Triggs, including calling for her resignation. The chairman of the International Coordinating Committee, the UN body responsible for accrediting national human rights institutions, described these attacks as intimidating and undermining the independence of the AHRC.

In March, the UN special rapporteur on torture, Juan Mendez, concluded that by failing to provide adequate detention conditions, end the practice of detaining children, and put a stop to escalating violence in processing centers, Australia was in violation of the Convention against Torture. Former Prime Minister Tony Abbott responded by stating that Australia was “sick of being lectured” by the UN.

In September, the UN special rapporteur on the human rights of migrants postponed a visit to Australia due to the “lack of full cooperation from the government regarding protection concerns and access to detention centres.” A High Court challenge on the legality of offshore detention centers was heard in October, and at time of writing was awaiting judgment.

In May, parliament passed the Australian Border Force Act, making it a crime punishable by two years’ imprisonment for anyone who works directly or indirectly for the Department of Immigration and Border Protection, including contractors such as doctors and aid workers, to disclose information obtained by them while doing that work. Medical groups have spoken out against the new law.

Under a refugee transfer deal struck with Cambodia, four refugees agreed to be relocated from Nauru to Cambodia in June. A fifth refugee was relocated in November. To gain Cambodia’s cooperation, Australia promised Cambodia A$40 million ($US29 million) in development aid and allocated a further A$15.5 million ($US11.2 million) to fund refugee resettlement in Cambodia.

The Migration Act continues to provide for the mandatory and indefinite detention of “unlawful non-citizens,” including children. According to the December 2014 amendments to the Migration Act, non-citizens can have their visas canceled for committing certain offenses or failing a “character test,” which is affecting migrants, long-term Australian residents (including those from New Zealand), and refugees. In November 2015, violence broke out on Christmas Island following the death of an Iranian refugee who escaped the center and whose body was found at the bottom of a cliff.

Australia has adopted extensive and overly broad new counterterrorism laws in response to the threat of “home-grown terrorism.” Amendments to the Australian Security Intelligence Organisation (ASIO) Act in October 2014 criminalize disclosure of information “that relates to a special intelligence operation” punishable by 5 or 10 years imprisonment. The offenses will have a chilling effect on whistleblowers, human rights defenders, and journalists, and impede reporting that fosters legitimate public debate and is in the public interest.

In March, the government passed the Telecommunications Amendment bill, requiring telecommunications companies to retain metadata for a period of two years so that Australian intelligence organizations can access the data.

In June, the government introduced the Australian Citizenship Amendment (Allegiance to Australia) bill, which provides that dual citizens who act in a manner “contrary to their allegiance to Australia,” including engaging in or supporting terrorist activities, will be stripped of their citizenship. The bill includes problematic provisions that operate retrospectively. Further legislation was introduced in November, allowing control orders to be applied to children as young as 14, and introducing a new offense of advocating genocide.

In February, the prime minister’s “Close the Gap” report highlighted the continued disadvantages that indigenous Australians face. While there were modest improvements in education and health outcomes, there was little progress on closing the life expectancy gap. Aboriginal and Torres Strait Islander peoples still live on average 10-12 years less than non-indigenous Australians, have an infant mortality rate almost two times higher, and continue to die at alarmingly high rates from treatable and preventable conditions such as diabetes and respiratory illness.

Indigenous Australians continue to be disproportionately represented in the criminal justice system. Aboriginal women are the fastest growing prisoner demographic in Australia.

In November, the High Court upheld the Northern Territory’s “paperless arrest” powers that allow police to detain individuals for up to four hours for minor, fine-only offenses.

A report from the Northern Territory’s children’s commissioner made public in September revealed serious shortcomings in juvenile detention practices in the territory. Youths in detention were subjected to isolation in cramped quarters, sometimes for nearly three weeks at a time, as well as to excessive use of force. In response to a disturbance in one Darwin juvenile detention center, staff used tear gas on six children, hooded and handcuffed them, including two who had taken no part in the disturbance, and temporarily moved them all to an adult prison.

Across Australia, Aboriginal and Torres Strait Islander children under age 18 are seriously overrepresented in youth detention facilities, representing more than half of child detainees. Indigenous children are often held in detention on remand, despite the international requirement that the detention of children be used as a last resort and for the shortest appropriate period of time.

Women and girls with disabilities in Australia face higher rates of violence in the community and in institutional settings than other women and girls. Some face coerced sterilization and forced psychiatric interventions. To date, the Australian government has done little to address such violence.

In September, a school principal was fired for building a metal cage in a classroom and using it to restrain a 10-year-old boy with autism. The incident prompted an inquiry into how schools respond to students with "complex needs and challenging behaviors."

According to the AHRC, people with intellectual disabilities are overrepresented in the prison population and have limited access to justice. There is also a lack of community-based independent living arrangements and support services for people with disabilities.

The public outcry over Indonesia’s execution in April of Australians Andrew Chan and Myuran Sukumaran for drug trafficking pushed senior Australian officials and politicians to condemn the executions and reiterate Australia’s stance against the death penalty more broadly. In July, the government established an inquiry to review how Australia engages internationally to promote the abolition of the death penalty.

In 2015, Australia announced its candidacy for a seat at the UN Human Rights Council in Geneva for the 2018-2020 term. To date, with observer status at the council, Australia has a mixed record, advancing certain thematic issues but not playing a leadership role on grave country situations globally. Australia has often responded dismissively to recommendations made by UN experts about its own domestic human rights record.

In November, Australia’s domestic rights record was reviewed for the second time as part of the council’s Universal Periodic Review process. More than 100 countries spoke up at the review, and nearly half of them—from every corner of the globe—criticized Australia's asylum laws and refugee policies and its treatment of indigenous people.