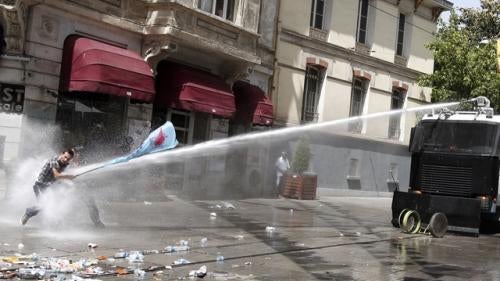 In office for three terms since 2002, and enjoying a strong parliamentary majority, the ruling Justice and Development Party (AKP) has demonstrated a growing intolerance of political opposition, public protest, and critical media.

In May, police violently dispersed campaigners staging a peaceful sit-in protest against a plan to build on Istanbul’s Taksim Gezi Park, triggering weeks of anti-government protests in cities throughout Turkey in late May and June. In repeatedly and harshly clamping down on protests, the government failed to uphold human rights.

On September 30, the government announced what it called a “democratization package” of reforms that demonstrated that the government is more focused on addressing the undemocratic legacy it inherited than abuses that have proliferated under its watch.  Positive steps included ending the headscarf ban for women in the civil service; signaling that the 10 percent election threshold that has kept minority parties out of parliament will be lowered; and easing the restriction on mother-tongue education by permitting it in private schools. Cross-party efforts to reach a consensus on a new constitution stalled over contested elements such as the definition of citizenship and minority rights provisions.

The government made important initial steps in a peace process with the country’s Kurdish minority. At the start of 2013, the government announced talks with imprisoned Kurdistan Workers’ Party (PKK) leader Abdullah Öcalan to end the decades-long armed conflict with the PKK. Bolder steps to address the rights deficit for Turkey’s Kurds could address the root causes of the conflict and help further human rights for all ethnic and religious minority groups in Turkey. Significantly, the government and the PKK maintained a ceasefire through 2013 and there were no deaths reported on either side.

The Syrian conflict continued to be strongly felt in Turkey’s border towns, and, as of November, Turkey was hosting 500,000 Syrian refugees, including 200,000 living in camps, according to Turkish government estimates. Turkish authorities periodically prevented tens of thousands of Syrian asylum seekers from crossing into Turkey, forcing them to live in internally displaced persons camps and Syrian villages in the border areas, including in areas hit by Syrian aerial attacks. A February car bombing killed 18 at the Cilvegözü, Hatay border crossing with Syria, and a May bomb attack in the Hatay town of Reyhanlı killed 52 civilians. The Turkish authorities suspect Syrian government involvement in both attacks. Five suspects have been indicted for the former bombing and 33 suspects for the Reyhanlı bombing.

The government’s response to the Taksim Gezi Park protests in Istanbul and anti-government protests in other cities demonstrated its intolerance of the right to peaceful assembly and free expression. The authorities charged hundreds of individuals involved in the protests—mostly in Istanbul, Ankara, and Izmir—with participating in unauthorized demonstrations, resisting the police, and damaging public property. Several dozen people face additional terrorism charges in connection with the protests. Around 50 protesters remained in pretrial detention at time of writing. A criminal investigation into the organizers of Taksim Solidarity, a platform of 128 nongovernmental organizations supporting the Gezi Park campaign and sit-in was ongoing.

The mute or biased coverage of the Taksim Gezi protests in much of Turkey’s media highlighted the reluctance of many media companies to report news impartially when it conflicts with government interests. In the course of the year, scores of media workers, among them highly respected mainstream journalists and commentators writing critically of the government in different media, were fired from their jobs.

Turkey continued to prosecute journalists in 2013, and several dozen remain in jail. The trial continued of 44 mainly Kurdish journalists and media workers (20 in detention since December 2011, at time of writing) for alleged links to the Union of Kurdistan Communities (KCK), a body connected with the PKK.

The government continued efforts to amend some laws that are used to limit free speech. In April, parliament passed a reform bill—known as “the fourth reform package” following three others since March 2011—amending various laws in response to violations identified by the European Court of Human Rights (ECtHR) in many judgments against Turkey. Positive changes included lifting limits on severe restrictions on publishing or reporting statements by illegal organizations (article 6/2, Anti-Terror Law) and narrowing the scope of the crime of “making terrorist propaganda” (article 7/2, Anti-Terror Law; article 220/8, Turkish Penal Code).

Reforms undertaken in 2013 did not remedy the situation of the thousands of prosecutions of individuals on charges of “membership of an armed organization” (article 314, Turkish Penal Code) for activities amounting to nonviolent political association. Demonstrating the government’s widespread misuse of terrorism laws to prosecute and incarcerate individuals,hundreds of Kurdish political activists, elected mayors, parliamentarians, officials of the Peace and Democracy Party, students, and lawyers have been in prison for long periods, in some cases for over four-and-a-half years, duringtheir trials for association with the KCK. The human rights defender Muharrem Erbey has spent four years in prison on these charges.

There was a spate of trials in 2013 against public figures for insulting the religious sentiments of a part of the population, similar to the prosecutions of individuals for “insulting Turkishness” common in the recent past. Pianist Fazil Say received a 10-month suspended prison sentence for sending tweets that poked fun at believers and Islam. An Istanbul court in April, and again during a retrial in September, determined the tweets had “insulted the religious sentiments of a part of the population” (under article 216/3 of the Turkish Penal Code). The case was at appeal at time of writing. Lawyer Canan Arın stood trial under the same charge, plus the charge of insulting the president, for her December 2011 comments at an Antalya Bar Association seminar on women’s rights mentioning the practice of early marriage in Islam and a reference to the fact that President Abdullah Gül’s bride had been a child. In May, the trial was suspended on condition that Arın does not commit a similar offense for the next three years.

Police Ill-treatment and Excessive Use of Force

The Taksim Gezi Park protests saw police repeatedly disperse protesters, most of whom were entirely peaceful, with water cannons, rubber bullets, and teargas, resorting to excessive use of force and beatings of detainees. Police also unlawfully shot teargas canisters directly at protesters, leading to scores of protesters receiving serious head injuries as a direct result. The Turkish Medical Association reported that 11 people lost an eye in this way. Fourteen-year-old Berkin Elvan was hit by a teargas canister in June and remained in a critical condition in a coma at time of writing. Six demonstrators and one police officer died in the course of demonstrations between May and September. Ali İsmail Korkmaz, a protester in Eskişehir, died of his head injuries in July after being beaten during a June 2 demonstration. The trial of four police and four civilians for his murder was scheduled to begin in February 2014. A police officer stood trial in September for the fatal shooting of Ethem Sarısülük, a protester in Ankara.

A report of the Interior Ministry’s inspectorate quoted in the press in September found that police in Istanbul and Izmir had used excessive force. The Security Directorate’s inspectorate announced in September that 164 police officers, 32 of them senior officers, faced administrative investigation. There was no information about the progress of criminal investigations into the police for excessive use of force at time of writing. Investigation and prosecution of demonstrators proceeded at a much faster pace.

Great obstacles remain in securing justice for victims of abuses by police, military, and state officials. The lifting of the statute of limitations for the prosecution of torture was a positive element in the April reform bill, though prosecution of unlawful killings by state perpetrators is still subject to a 20-year time limit, raising concerns about impunity for abuses committed in the early 1990s.

In June 2013, the Diyarbakır prosecutor’s office said it lacked jurisdiction in the case of an attack by the Turkish Air Force in December 2011 that killed 34 Kurdish villagers close to the Iraqi Kurdistan border near Uludere. The prosecutor referred the case to the military prosecutor, but the lack of an effective investigation to date supports concerns about an official cover-up.

The retrial of a group of young men for the January 2007 murder of journalist Hrant Dink began in September following the Court of Cassation decision to quash the first verdict on procedural grounds. To date there has been inadequate investigation of evidence of state collusion in Dink’s murder.

The trial of anti-AKP coup plotters (the Ergenekon gang) ended in August with 259 defendants receiving a range of long sentences and 21 acquitted. The case was under appeal. While the Ergenekon case represented a milestone in civilian control over the military, it illustrates the serious concerns regarding the proliferation in recent years, and the fairness, of “mass trials” in which multiple defendants are alleged to have been part of terrorist groups. In the Ergenekon case, there are concerns too there was no investigation of the human rights abuses in which a core group of the military suspects were implicated.

In September, the trial began of 103 retired members of the top military (5 in detention at time of writing) charged with removing the government of former Prime Minister Necmettin Erbakan  in 1997.

The European Union, leading EU member states, and the United States expressed strong support for a peace process to end the conflict with the PKK and solve the Kurdish issue. They also raised to varying degrees concerns over the Turkish government’s handling of the Taksim Gezi Park protests, including police use of excessive force in dispersing nonviolent demonstrations. The European Commission also expressed concern over the handling of the Taksim Gezi Park protests in its annual progress report released in October. In November, the EU revived EU accession negotiations with Turkey, opening a new chapter on regional policy.

Among ECtHR rulings against Turkey in 2013, a July decision (Abdullah Yaşa and Others v. Turkey) found that improper firing of teargas by Turkish police directly at protestors, injuring a 13-year-old, had violated human rights standards, and called for stronger safeguards to minimize the risk of death and injury resulting from its use.

Following a visit in November 2012, the UN special rapporteur on extrajudicial, summary or arbitrary executions concluded “the most important and urgent challenge is the lack of accountability in cases of killings, both those perpetrated recently and those from the 1990s.”

In July, the UN Working Group on Arbitrary Detention issued an opinion stating the detention of 250 military personnel on trial for coup-plotting (the so-called Sledgehammer trial) was arbitrary and violated the International Covenant on Civil and Political Rights.