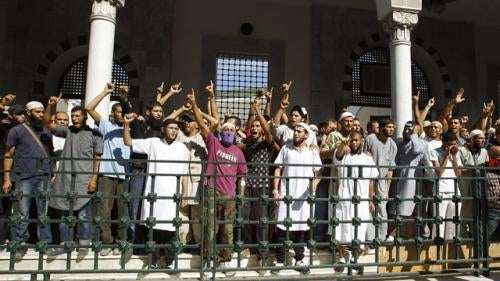 Tunisia’s process of democratic transition continued, but at a slow pace. The National Constituent Assembly (NCA), elected in October 2011, continued to draft a new constitution but at this writing it had yet to be approved. The assassination by alleged Islamist militants of two leading leftist opposition politicians, Chokri Belaid and Mohamed Brahmi, on February 6 and July 25 respectively, caused widespread shock and sparked a political crisis that saw the NCA suspended for two months.

Since they overthrew the Ben Ali regime in 2011, Tunisians have enjoyed greater freedom of expression, assembly and association, including the freedom to form political parties. However, several factors have hampered the consolidation of rights’ protections. These include the delay in adopting a new constitution consistent with international human rights law and standards, the retention of the former regime’s repressive legal arsenal, and attempts by the executive branch to control media and prosecute speech offenses.

Human Rights in the Draft Constitution

The NCA issued a new draft constitution in June. Thought an improvement on the three previous drafts—providing safeguards for most civil, political, economic, social, and cultural rights—it was also deficient in several respects. In particular, it failed to include a clause directly incorporating human rights, as defined under customary international law and in international treaties that Tunisia has ratified, into Tunisian national law. In addition, the new draft contained only weak formulations of the principles of equality and non-discrimination before the law, and allowed for limitation of the rights to freedom of expression, assembly, association, movement, and access to information in overly broad terms, which could result in their arbitrary restriction. At time of writing, it remained unclear when the new constitution would be adopted.

The authorities decided in May 2013, after some delay, to implement decree-law 116 on audiovisual media. This required the creation of an Independent High Authority for Audiovisual Communication (HAICA) to regulate broadcast media. Despite this, the executive branch continued unilaterally to appoint the heads of state radio and television broadcasters in contravention of international freedom of expression standards governing the independence of public service media.

In 2013, judicial authorities prosecuted many journalists, bloggers, artists, and intellectuals on account of their peaceful exercise of freedom of expression using penal code provisions criminalizing “defamation,” “offenses against state agents,” and “harming public order,” all of which can result in prison terms. The NCA made no effort to abolish or suspend these Ben Ali era provisions, and the courts did not rule them inconsistent with international human rights law.

On March 8, authorities charged blogger Olfa Riahi with criminal defamation after she published information online about alleged misuse of public funds by former foreign minister Rafik Abdessalem. Her case was still under investigation at time of writing.

On August 30, a criminal court in Hammamet imposed prison terms on two Tunisian rappers, known by the names “Weld El 15” and “Klay BBJ,” after convicting them in their absence of “insulting the police” and other charges. They had performed a song critical of police violence at a music festival. On October 17, an appeals court acquitted Klay BBJ and set him free after three weeks in prison. In March, Weld El 15 had released a video accompanying his song “Cops Are Dogs,” which showed police assaulting people. For this, a criminal court in Manouba sentenced him to two years in prison, which the Appeals Court in Tunis reduced to a suspended six-month term on July 2.

On September 9, an investigative judge ordered the arrest and detention of police union leader Walid Zarrouk after he allegedly posted comments on a Facebook post criticizing politicized prosecutions. The same day, in separate cases, prosecutors summoned Zouhaer al-Jiss, a journalist, for moderating a radio program in which a participant criticized Tunisia’s president, and Zied al-Heni, a journalist who had criticized the arrest of a cameraman who filmed an egg-throwing attack on the culture minister. Al-Heni was arrested that day and spent three days in jail before being released on bail.

In April, the NCA appointed a temporary high judicial council to supervise the appointment, promotion, transfer, and discipline of judges pending the adoption of a new constitution. This long awaited reform was intended to end or reduce the undue executive influence over the judiciary that, in October 2012, saw the Ministry of Justice arbitrarily dismiss 75 judges.

Tunisia has long had a reputation as among the most progressive of Arab states with respect to women’s rights. The new draft constitution reflects this, declaring that the state “guarantees the protection of women’s rights and supports their gains,” “guarantees equal opportunity between men and women to assume responsibilities,” and “guarantees the elimination of all forms of violence against women.” This is an improvement over previous constitutional drafts that invoked notions of “complementary” gender roles that risked diluting the principle of equality between men and women. However, the new draft constitution fails to fully embody the principle of equality between the sexes as it refers to equal opportunity in “assuming responsibilities,” but not to the broader right to equality of opportunity in all political, economic, and other spheres.

Prosecution of Attacks by Fundamentalist Groups

In May, a Tunis court imposed two-year suspended prison sentences on 20 defendants it convicted of participating in an attack on the American Embassy on September 14, 2012, by thousands of people, mostly religious conservatives, protesting a movie made in the US that they deemed insulting to Islam. Four protesters died in the attack, in which protestors burned the American flag and a nearby American school, and destroyed cars and other property.

The authorities also accused Islamist religious conservatives of responsibility for the assassinations of Chokri Belaid and Mohamed Brahmi, and said that both men were shot with the same gun. Their murders sparked widespread protests. The authorities declared Ansar al-Sharia, an Islamist group, a "terrorist organization" and arrested dozens of suspected members. Two of the suspects alleged torture in prison.

Tunisians now have more freedom to exercise their rights to peaceful demonstration since Ben Ali’s ousting. However, police and other security forces continued to use excessive force against demonstrators in 2013. For example, on May 19, security forces fired live ammunition and birdshot at protestors during clashes in Intilaka and Cite Ettadhamen, Tunis neighborhoods, killing one person and injuring four others. Following the murder of Mohamed Brahmi, security forces used excessive force, including beatings and tear gas, to disperse protesters, killing one person and injuring others. The authorities failed to investigate and to hold the security forces accountable.

In June, the NCA began considering a draft transitional justice law, which proposes the creation of a Council of Truth and Dignity to uncover the truth about past rights abuses. At time of writing, the law had yet to be enacted.

Military courts have tried several groups of defendants accused of killing protesters during the revolution which toppled the former president. A military court also sentenced Ben Ali, who remains in Saudi Arabia, to life in prison for complicity in murder, after trying him in absentia, and jailed several former high-ranking officials.

These trials appeared to respect defendants’ rights and enabled some victims to pursue justice, but several factors undermined their value towards achieving accountability, notably the authorities’ failure to identify the direct perpetrators of killings and lack of an adequate legal framework to prosecute senior officers with command responsibility for crimes that their subordinates committed. The government’s failure to press effectively for Ben Ali’s extradition from Saudi Arabia also undermined accountability.

Although Ben Ali’s security forces used torture extensively, the new authorities have failed in the almost three years since the overthrow of Ben Ali to investigate the majority of torture cases. In the one torture-related trial that has taken place, a court convicted former Interior Minister Abdallah Kallel and three security officials of “using violence against others either directly or through others,” and sentenced them to two year prison terms. The case arose from the arrest and detention of 17 senior military officers in 1991 in connection with an alleged plot by the Islamist group Al-Nahdha against Ben Ali.

The European Union provides funding support for judicial, security sector and other institutional reform. In October 2012, the EU approved €25 million (US$32 million) to support strengthening judicial independence and pledged a further €40 million ($51.2 million) in June 2013.

On September 13, following his visit to Tunisia, the special rapporteur on the promotion of truth, justice, reparation and guarantees of non-recurrence urged the government to adopt a comprehensive transitional justice program, and to enact legislation transferring jurisdiction over cases involving gross violations of human rights in which the military or security forces are implicated, from military courts to the ordinary civilian justice system.