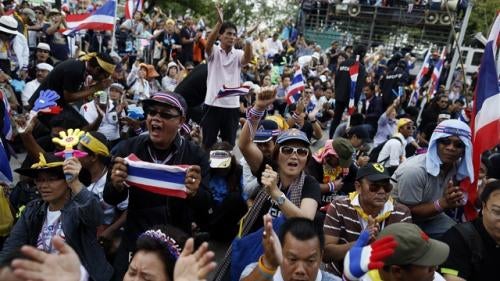 The government of Prime Minister Yingluck Shinawatra made little progress in 2013 in resolving ongoing, serious human rights problems, and continued to protect the military from accountability for the political violence in 2010.

More than 100,000 opposition supporters took to the streets in November and December in response to the ruling Pheu Thai Party’s attempt to pass a blanket amnesty for all individuals responsible for political violence and corruption from 2004 to 2011. This led to a series of clashes that had left at least four dead and over 200 wounded at time of writing.

At least 90 people died and more than 2,000 were injured in the 2010 political violence, with most casualties resulting from unnecessary and excessive use of lethal force by soldiers. Elements of the United Front for Democracy against Dictatorship (UDD), popularly known as the “Red Shirts,” were also responsible for deadly armed attacks on soldiers, police, and civilians.

Court inquests found that 15 of the victims in the 2010 violence were shot dead by soldiers acting under orders from the Center for the Resolution of the Emergency Situation (CRES), established by then-Prime Minister Abhisit Vejjajiva and chaired by then-Deputy Prime Minister Suthep Thaugsuban. While Abhisit and Suthep have been charged with premeditated murder based on command responsibility, no military personnel have been charged in the killings.

The status of government investigations into alleged crimes by the UDD-linked “Black Shirt” militants remains unclear. Despite clear photographic and other evidence, the UDD leadership and its supporters, including those holding positions in the government and the parliament, continue to assert that the UDD had no armed elements at the time of the 2010 events.

The government commendably has provided reparations to all those harmed by the 2010 violence. Some victims and their families, however, have expressed concern that financial compensation is serving as a substitute for bringing perpetrators of violence to justice.

On November 1, 2013, the House of Representatives passed an amnesty bill proposed by the Pheu Thai Party that promised a full amnesty for protesters from all political sides charged with or convicted of actions against the state from 2004 to 2011, for authorities who ordered crackdowns on protesters, for soldiers who carried out the crackdowns, and for individuals convicted of corruption after the 2006 coup.Even though the Senate rejected this bill on November 11, anti-amnesty protests in Bangkok and other provinces escalated. More than 100,000 people took to the streets in what protest leaders publicly called an attempt to topple the Yingluck government and eliminate the political network of former Prime Minister Thaksin Shinawatra.

Clashes on November 30 between pro and anti-government groups at Ramkhamhaeng University and Rajamangala Stadium in Bangkok left at least 4 dead and 60 wounded. Protesters from the People's Democratic Reform Committee (PDRC) and other anti-government groups clashed with police when they tried to storm the Government House and the Bangkok Metropolitan Police headquarters on December 1 and 3, leading to more than 200 injuries—mostly side-effects from exposure to teargas.

Criticizing the monarchy is a criminal offense in Thailand. The number of arrests and convictions for lese majeste (insulting the monarchy) offenses has significantly declined since Prime Minister Yingluck entered office in 2011, but authorities continue to use the lese majeste law (in article 112 of the penal code), as well as the Computer Crimes Act, to suppress free speech and prosecute critics of the monarchy. Persons charged with lese majeste offenses are routinely denied bail and remain in prison for many months awaiting trial.  In most cases, convictions result in harsh sentences.

On January 23, the Bangkok Criminal Court sentenced Somyot Prueksakasemsuk—a magazine editor and prominent pro-democracy activist—to 11 years in prison for publishing two articles in his Voice of Taksin magazine that made negative references to the monarchy. Authorities denied bail to Somyot eight times during the course of his 20-month pretrial detention. The United Nations Working Group on Arbitrary Detention determined in August 2012 that the pretrial detention of Somyot violated international human rights law. Somyot has appealed his conviction.

On September 13, the Bangkok Criminal Court acquitted Yuthaphum Madnok of lese majeste charges filed against him by his own brother. Authorities had detained Yuthaphum without bail since September 2012 because the court determined that his alleged insults to the monarchy posed a threat to national security. The case, in which the lese majeste law became a weapon in a family feud, shows how easily the law can be misused. Often the police, courts, and prosecutors are afraid they will be accused of disloyalty to the monarch if they fail to prosecute allegations of lese majeste.

The ruling Pheu Thai Party, the government’s allies in the UDD, the military leadership, the opposition Democrat Party, and anti-government groups have all explicitly and publicly argued that those accused of committing lese majeste offenses should not be included in any amnesty proposal. In 2013, the palace pardoned three individuals convicted of the offense.

On November 25, anti-government PDRC protesters assaulted Nick Nostitz, a German freelance journalist, after a former Democrat Party member of parliament, Chumpol Junsai,asserted from a protest stage that Nostitz was affiliated with the UDD. Nostitz’s photograph subsequently was disseminated widely on anti-government social media sites, raising concerns for his safety.

Led by politicians from the Democrat Party, thousands of PDRC supporters marched to the headquarters of TV channels 3, 5, 7, 9, 11 and Thai PBS on December 1 to pressure them to broadcast Suthep’s speech and not to transmit government-provided information on the political confrontations.

On February 28, the government agreed to hold talks with Hassan Taib from the separatist Barisan Revolusi Nasional (BRN) movement, seeking an end to the armed conflict that has claimed more than 5,000 lives in Thailand’s southern border provinces since January 2004. The two sides agreed to cease hostilities during the holy month of Ramadan from July 10 to August 18.

The Fatoni Fighters (also known as Pejuang Kemerdekaan Fatoni), insurgents in the loose BRN network, continued to target civilians in bomb attacks, roadside ambushes, drive-by shootings, and assassinations. The attacks by the ethnic Malay Muslim insurgents appear aimed at intimidating and ultimately driving out the ethnic Thai Buddhist population in Narathiwat, Yala, and Pattani provinces, keeping the Muslim population under their control, and discrediting government authorities for being unable to protect citizens. Thai security forces have also been responsible for killings and other abuses against ethnic Malay Muslims.

The government provided financial compensation to hundreds of Muslim victims of abuses committed by the security forces. However, security personnel still operate with impunity, and not a single security officer has been held accountable for involvement in extrajudicial killings, torture, enforced disappearances, and other abuses in the region.

Insurgents also launched bomb attacks against government-run schools and attacked Buddhist teachers whom they accuse of representing the ideology of the Thai Buddhist state. Since January 2004, 164 teachers have been killed in southern Thailand.

The government signed the International Convention for the Protection of All Persons from Enforced Disappearance in January 2012, but has taken no steps to obtain parliamentary ratification of the treaty. The penal code does not recognize enforced disappearance as a criminal offense. Authorities have continually failed to give priority to solving any of the 63 known cases of enforced disappearance.

On February 25, a gunman killed Prajob Nao-opas, a well-known environmental activist leading a campaign to expose the dumping of toxic waste in Chachoengsao province. Since 2001 more than 20 environmentalists and human rights defenders have been killed. Investigations into the killings have frequently suffered from inconsistent and shoddy police work, and been plagued by political interference in law enforcement efforts and, in several cases, by the Justice Ministry’s failure to provide witnesses adequate protection.

In a chilling development for human rights research, on February 14, the Natural Fruit Company Ltd. filed criminal defamation charges against labor activist Andy Hall for allegations made in an investigative report about serious labor rights violations at its factory.

In the southern border provinces, the security agencies have profiled ethnic Malay Muslim human rights defenders, paralegals, and student activists as “insurgent sympathizers” and subjected them to surveillance and arbitrary arrest and detention.

The government has given public assurances that the 140,000 Burmese refugees living in camps on the Thai-Burmese border will not be forced to return home against their will. Some 40 percent of camp residents remain unregistered, however, and Thailand restricts their freedom of movement and bars all refugees from working.

Thailand is not a party to the 1951 Refugee Convention and has no law that recognizes refugee status. Asylum seekers and refugees who are arrested often face long periods of detention until they are accepted for resettlement or agree to be repatriated at their own expense.

Authorities regularly intercept and push back boats carrying ethnic Rohingya from Burma. The government considers all Rohingya arriving on Thailand's coast to be illegal migrants. Between January and October, more than 2,000 Rohingya were detained. Rohingya men are restricted to poor and extremely cramped conditions in small cells, and at least eight of them have died from illness while in immigration detention. Starting in July, Rohingya men—fearful of being sent back to persecution in Burma or detained indefinitely in Thailand—staged protests at immigration detention facilities in many provinces. Human traffickers have gained access to government shelters and tried to lure out Rohingya women and children.

The government continues to send drug users to “rehabilitation” centers, mostly run by the military and the Interior Ministry, where “treatment” consists mainly of military-style physical exercise. Routinely detained in prison prior to compulsory rehabilitation, detainees get little or no medical assistance for drug withdrawal symptoms.

In November and December, the United Nations secretary-general—together with officials from the European Union, United States, United Kingdom, and Australia—raised concerns about the ongoing political confrontations, urging all sides to reject violence, respect human rights, and resolve their differences peacefully.

Thailand in 2013 launched a bid for a non-permanent seat on the UN Security Council for 2017-2018, and for election to the UN Human Rights Council (HRC) for 2015-2017. Thailand is one of the few countries in the Southeast Asia region that has extended a standing invitation for HRC special procedures. On September 9, 2013, Prime Minister Yingluck became the first Thai leader to speak at the HRC. However, her speech did not substantively address Thailand’s outstanding human rights problems.