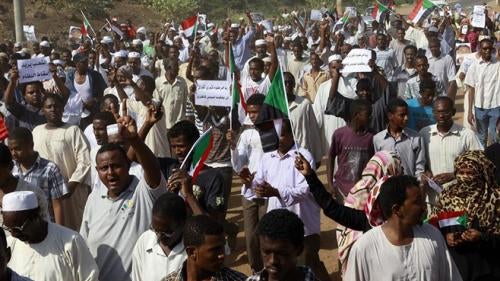 Fighting between Sudanese forces and rebel groups continued in Sudan’s war-torn peripheries and was marked by serious violations of international humanitarian and human rights law.

In Darfur, authorities failed to protect people from intensified inter-communal clashes, particularly between Arab pastoral groups. Sudanese forces also attacked communities presumed to support rebel groups. In Southern Kordofan and Blue Nile, Sudan’s indiscriminate bombing and ongoing clashes with rebels, and the obstruction of humanitarian assistance to rebel-held areas since the outbreak of conflict in June 2011, have displaced tens of thousands within those states and elsewhere in Sudan and forced more than 225,000 to flee to refugee camps in South Sudan and Ethiopia.

Sudanese security forces continued to arrest and detain activists, opposition party members, and people suspected of links to rebel groups. Authorities also censored the media and restricted space for civil society, stepping up at the end of 2012 the harassment of groups that receive foreign funding.

In September, protests, some of them violent, swept the country in response to hikes in the price of fuel and other basic commodities. Sudanese forces responded to the protests with live ammunition, and are implicated in the killing of more than 175 protesters. Security officials detained hundreds of protesters and opposition members and activists, many for weeks without charge, and stifled media coverage of the protests.

More than 500,000 people were displaced by conflict in 2013, a number far exceeding previous years. The vast majority of Darfur’s displaced population, estimated around 2.5 million people, remain in camps in Darfur and Chad.

Communal violence, especially between Arab pastoralist groups, significantly increased in 2013. Sudanese government forces were unwilling or unable to protect civilians and in some cases participated in the fighting. In April, Ali Kosheib, a known militia leader who is wanted by the International Criminal Court (ICC) for alleged crimes in Darfur, participated in large-scale attacks on ethnic Salamat villages in Central Darfur, before being seriously wounded in May.

Government forces and allied militia carried out large-scale attacks, including aerial bombing, on locations believed by the government to be controlled by rebel groups. In February, government forces attacked Golo and Guldo in eastern Jebel Mara, killing an unknown number of civilians and forcing tens of thousands to flee to safer areas. In early April, government forces bombed and attacked the towns of Labado and Muhajariya and several other villages in South Darfur, and reportedly burned and looted homes and killed dozens of civilians and displaced tens of thousands.

Sudan continued to deny peacekeepers from the African Union-United Nations Mission in Darfur (UNAMID) access to much of Darfur. Insecurity also undermined UNAMID’s work. Armed attackers in Darfur killed 12 peacekeepers and injured many more between July and October alone.

Authorities have not prosecuted the vast majority of serious crimes committed in violation of international humanitarian and human rights law during the Darfur conflict. Although some pro-government media outlets reported that the government’s special prosecutor investigated numerous cases, few if any Sudanese government forces or militia have been prosecuted, and Sudan has failed to implement justice reforms recommended in a 2009 report by the AU High-Level Panel on Darfur, the lead mediation body.

Sudan has not cooperated with the ICC; arrest warrants or summonses for six men, including President Omar al-Bashir, on charges of genocide, crimes against humanity and war crimes remain outstanding. A case involving alleged war crimes committed by one rebel leader proceeded at the ICC, while proceedings against a second rebel leader were terminated following his death.

The conflict remains marked by serious violations of international human rights and humanitarian law, including indiscriminate bombing that has killed and maimed scores of people; destroyed schools, clinics, and other civilian buildings; and instilled fear in the population.

More than a million people have been forced to flee from their homes; at least 230,000 live in refugee camps in South Sudan or Ethiopia. Sudan obstructed humanitarian access to tens of thousands displaced in areas controlled by the SPLA-North.

Sudanese government forces have also carried out mass detentions and prosecutions in the two states. From November 2012 until May 2013, authorities detained 32 ethnic Nuba women from Southern Kordofan without charge because of their suspected affiliation with the Sudan People’s Liberation Movement-North (SPLM-North), the opposition party Sudan banned in 2011. Authorities have also brought charges against dozens of men from Blue Nile state in an anti-terrorism court on the basis of their presumed links to the rebel movement.

Restrictions on Freedom of Assembly, Association

In September, government security forces shot tear gas, rubber bullets, and live ammunition at protesters during sometimes violent mass protests, using excessive force. Sudanese human rights groups reported that more than 175 people, most of them teenagers or in their early twenties, were killed by shooting during the protests.

Security forces also shot and killed at least seven people including two children in Nyala, South Darfur, during September protests over the killing by militia of a prominent businessman. Government forces have also violently dispersed student protests on several other occasions across the country during the year. In May, security forces shot at students at El Fashir University, North Darfur, injuring eight.

Sudanese authorities targeted and harassed, intimidated, and closed some civil society organizations, in particular several that had received foreign funding. In December 2012, security officials shut down three civil society groups and one literary forum, and summoned leaders of other groups for questioning. Authorities have obstructed groups from legally registering and refused permission for or cancelled public activities in towns across Sudan.

In early 2013, authorities also shut down Nuba and Christian groups, arresting staff and confiscating property. Church leaders were questioned about sources of funding, and the government deported or otherwise forced to leave Sudan more than 170 foreign church members.

After a cut in fuel subsidies sparked mass demonstrations in September, National Intelligence and Security Service (NISS) officials detained hundreds of protestors and opposition party members and activists, arresting many from their homes. NISS detained hundreds without charge, many of them for several weeks.

In January, security officials detained six leading members of Sudan’s political opposition parties, apparently for attending a meeting of opposition groups that signed an opposition agreement known as the New Dawn Charter, and held them without access to lawyers or appropriate medical care for at least 10 weeks before their release without charge.

Despite a pledge in April by President al-Bashir to release all political prisoners, scores remained in detention without charges, many from conflict-affected parts of the country. In July, authorities arrested more than 24 people, including ethnic Nuba and Darfuri student activists, for their perceived links to rebel groups.

Despite a pledge in May to halt prepublication censorship of newspapers, whereby security officials remove articles before a newspaper goes to print, authorities have continuously censored media. They have suspended publication of some papers, confiscated printed editions, suspended individual journalists, blocked websites, and harassed and threatened journalists with prosecution for criticizing the government

In September, authorities tightened restrictions on media to prevent coverage of the protests. Security officials instructed newspaper editors not to publish articles related to the protests, confiscated editions of three newspapers, summoned several journalists for questioning, jammed the reception of international TV stations, and blocked the Internet for one day. Most newspapers and the TV stations have resumed, but remain under tight scrutiny.

Sudan has yet to pass a new permanent constitution, despite the end of the transition period in the 2005 Comprehensive Peace Agreement, during which it had adopted an Interim National Constitution, and the secession of South Sudan.

The National Security Act of 2010 and many other laws contravene basic human rights norms. Authorities continued to apply Shari’a law sanctions that violate international prohibitions on cruel, inhuman, or degrading punishment. On February 14, Sudan implemented a penalty of cross-amputation, the amputation of the right hand and the left foot. Women and girls continue to be subjected to flogging and other humiliating punishments under discriminatory public order laws.

In July, parliament passed amendments to the Sudan Armed Forces Act of 2007 that subject civilians to the jurisdiction of military courts for a range of broadly defined offences such as undermining the constitutional system, leaking classified information, and the publication of “false news.”

Sudan’s relations with South Sudan remained tense in 2013, with both countries accusing the other of support to rebel movements. Implementation of a September 2012 agreement signed by Sudan and South Sudan was slow. The agreement addresses a range of outstanding issues, including oil production, debt, the status of the nationals of one country resident in the other, border security, and resolution of border disputes. The status of the contested area of Abyei remains unresolved.

The United Nations, African Union, and key nations involved in Sudan continued to press for implementation of the September 2012 agreement but made little progress addressing Sudan’s internal armed conflicts or human rights record.

Efforts by advocacy groups in relation to the ICC arrest warrant for President al-Bashir’s appeared to again restrict his international travel. He cut short a July trip to Nigeria and cancelled September plans to attend the UN General Assembly.

In October, the European Parliament adopted a strong resolution on the human rights situation in Sudan urging the Sudanese Government “to cease all forms of repression against those who exercise their right to freedom of expression, both online and offline, and to protect journalists.”