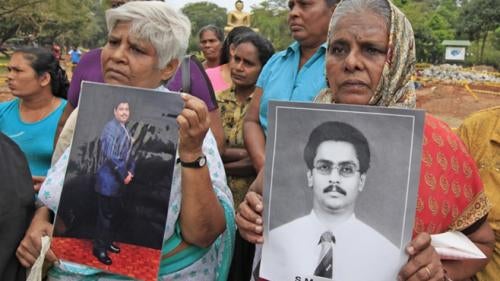 The Sri Lankan government of President Mahinda Rajapaksa made little progress in 2013 in addressing accountability for serious human rights abuses committed during the country’s nearly three-decades-long civil war, which ended in 2009. In March, the United Nations Human Rights Council (HRC) adopted a second resolution in as many years that called on Sri Lanka to implement the recommendations made by its own Lessons Learnt and Reconciliation Commission (LLRC) and provide accountability for alleged war crimes committed by both sides in the civil war. The government claimed it was implementing the LLRC recommendations, but its claims were difficult to verify and accountability efforts lacked credibility.

The year saw an escalation in attacks by militant Buddhist groups against Hindus and Muslims.

The independence of the judiciary came under question after the Rajapaksa government orchestrated the impeachment of Chief Justice Shirani Bandaranayake in December 2012 after she had ruled against the government in a major case.

Elections for three provincial councils were conducted in September. Independent observers reported dozens of incidents of intimidation, violence, and improper military interference. The Tamil National Alliance (TNA) won a large majority in the Northern Provincial Council, an ethnic Tamil-majority area that was the site of much of the fighting during the civil war.

By September, the government was detaining 230 of the estimated 12,000 members and supporters of the defeated Liberation Tigers of Tamil Eelam (LTTE) held at the end of the civil war for “rehabilitation.”

Sri Lanka’s failure over several years to address war crimes allegations prompted the HRC in March to issue a resolution calling on Sri Lanka to independently and credibly investigate violations of international humanitarian and human rights law. The resolution also called on UN High Commissioner for Human Rights Navi Pillay to give an oral update on the human rights situation in Sri Lanka during the HRC’s September session, and to present a written report at the March 2014 session.

Following the HRC resolution, the government issued several updates regarding its implementation of LLRC recommendations, including investigations into a few war crimes allegations. Many of its claims were difficult to verify due to lack of government transparency, and, even if accurate, in important respects fell far short of the steps called for in the resolution.

Special army courts of inquiry established in 2012 wholly exonerated the army of any laws of war violations despite significant evidence to the contrary. While the government arrested 12 members of the policeSpecial Task Force as part of its investigation into the murder of five Tamil youths in Trincomalee in January 2006, it failed to arrest senior police officials implicated. In response to LLRC concerns about enforced disappearances, the government established the latest in a long line of special commission with a limited mandate and no clarity as to whether the government would publicize its findings.

High Commissioner Pillay travelled to Sri Lanka in August. Her September oral report to the HRC was a scathing critique of the government’s failures on post-war accountability. Pillay said she found no evidence of government efforts “to independently or credibly investigate the allegations” of war crimes and reported that the government had failed to implement many of the LLRC recommendations. Pillay said that the separation of the police from the Ministry of Defence, a key LLRC recommendation, remained incomplete as the police were placed under the command of a former army officer.

Torture and other ill-treatment of persons in custody by the security forces has been a widespread problem both during and since the armed conflict. Human Rights Watch published new evidence in February that rape and sexual violence has been a key element of broader torture of suspected LTTE members and supporters even since the war’s end. The torture is used to obtain “confessions” of LTTE involvement, and to instill terror in the broader Tamil population to discourage involvement with the LTTE.

The government rejected these findings and claimed they were fabrications by individuals seeking to embellish their overseas asylum claims. Human Rights Watch is unaware of any government investigations into the reported sexual abuse.

Several European countries have since suspended deportations of Tamils with connections to the LTTE, finding them to be at risk of torture on return. UNHCR revised its guidelines on assessing asylum claims in December 2012, and recommended that persons with certain links to the LTTE be regarded as being at risk on return.

Sri Lanka’s Prevention of Terrorism Act gives police broad powers over suspects in custody and is the law most commonly invoked by officials to justify prolonged detention without trial of security suspects. It is still in regular use. The government asserts it has made available comprehensive lists of the names of those detained under the law as well as their places of detention, but family members in 2013 reported difficulty accessing the information. Pillay said during her trip in August that she had “never seen this level of uncontrollable grief” when visiting with families of the forcibly disappeared in northern Sri Lanka.

Civil society organizations and media continue to face arbitrary restrictions and intimidation. In June, the government proposed a dangerously ambiguous media code that would have prohibited 13 types of substantive speech, including content that “offends against expectations of the public, morality of the country, or tends to lower the standards of public taste and morality.” Also prohibited would have been any content that “contains material against the integrity of the Executive, Judiciary, and Legislative”—which could have been interpreted as barring criticism of the government. The proposed code was withdrawn in the face of a storm of negative media coverage.

Activists and organizations, particularly those working in the north and east, report ongoing harassment and intimidation. Pillay reported that people who she met with in the north and east were visited by security forces within hours of her visit. Instead of investigating these reports, the government denied Pillay’s allegations and demanded the names of her sources. Repression by the government is not limited to the north and east: in August, the army opened fire on protesters in Weliweriya demanding clean drinking water, killing three.

In July, a senior Sri Lankan diplomat launched a public attack on Callum Macrae, producer of “No Fire Zone,” a documentary film about alleged war crimes at the end of the civil war, tweeting suggestions that Macrae was a terrorist receiving “blood money” from the LTTE. The government did not censure the diplomat for his remarks, and a Channel 4 crew including Macrae was subjected to continual harassment during the Commonwealth summit in November.

A disturbing trend was the rise in violence against religious minorities, led largely by the militant Buddhist group Bodhu Bala Sena (BBS). The government did little to investigate or prevent these attacks. During an ongoing campaign by the BBS targeting Sri Lanka’s Muslim population, the secretary to the Ministry of Defence, the president’s brother, was the group’s guest at a public event. In her September oral report to the HRC, High Commissioner Pillay expressed alarm at the rise in hate speech against religious minorities, and called for more forceful government intervention to prevent violence.

Military Abuses in the North and East

The government contends to have considerably decreased its military presence in the north and east, but credible accounts indicate that military personnel still frequently intervene in civilian life. The Defence Ministry and army websites both regularly post articles about the role of the military in civilian affairs that appear intended to exert control over the local population and development. Independent observers of provincial council elections in September expressed concern about military campaign activities in favor of the ruling party there, and the resulting heightened sense of insecurity and tension among the Tamil population ahead of the elections.

Women and girls in the north and east remained especially vulnerable to sexual harassment and violence that the army neither prevented and may have contributed to. Women’s rights groups working in Tamil areas reported particular difficulty documenting abuses because of an oppressive military presence.

At the March HRC session, the government unsuccessfully tried to block the council from adopting a resolution focusing on accountability for serious wartime abuses. The resolution, backed by the United States and India among others, sets the stage for calling for an independent investigation at the 2014 HRC session if Sri Lanka does not take meaningful steps to implement the resolution.

Canadian Prime Minister Stephen Harper, as well as the prime minister of Mauritius, did not attend the Commonwealth Heads of Government Meeting (CHOGM) in November in Colombo because of human rights concerns. The prime minister of India also did not attend the summit, citing domestic concerns. The human rights situation in Sri Lanka and lack of accountability for wartime atrocities became the focus of media coverage. United Kingdom Prime Minister David Cameron attended the summit, and spent much time touring war-ravaged parts of the north and talking to local activists. He publicly said the UK would back an international investigation into war crimes if the Sri Lankan government did not undertake an independent investigation, a position supported by the US and Canada.

China kept up its high-profile engagement and investment in Sri Lanka and vocally opposed the HRC resolution. After pressing for Sri Lanka to hold meaningful provincial council elections, India continued to call for the full implementation of the 13th amendment to the constitution, which calls for devolution of powers to the provinces.