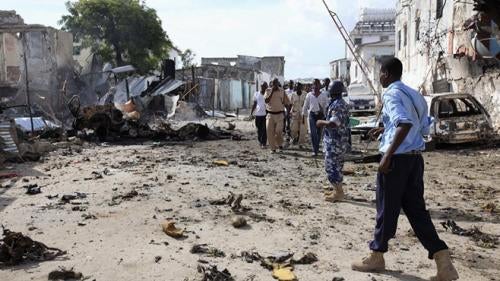 Civilians continue to suffer serious human rights abuses asthe new Somali government struggled to extend its control beyond the capital, Mogadishu, and to some key towns in south-central Somalia in 2013.Parties to Somalia’s long-running armed conflict were responsible for serious violations of international law; abuses include indiscriminate attacks, sexual violence, and arbitrary arrests and detention.

The Islamist armed group Al-Shabaab maintains control of much of southern Somalia, and the group increased attacks on high-profile civilian locales in Mogadishu, including the courthouse, a popular restaurant, and the United Nations compound, killing scores of civilians. Those fighting against Al-Shabaab—a combination of Somali government armed forces, the African Union Mission in Somalia (AMISOM), Ethiopian government troops, and allied militias—have also committed abuses.

The new government’s human rights record has been mixed. Despite public pledges to tackle rights violations, implementation has been poor. The government and its security forces undermined these commitments, for example, in February, by arresting a woman who alleged rape by government forces and also a journalist who interviewed her. They were convicted of tarnishing state institutions buteventually acquitted after significant international criticism.

The government gave priority to justice and security sector reform, essential to improving human rights, but insecurity in Mogadishuand other government-controlled areas remains a serious challenge. The unresolved implementation of the proposed federalism plan ledto open conflict and abuses, notably in the contested port town of Kismayo,where fighting broke out in June between rival militia.

Abuses in Government-Controlled Areas
Civilians were killed and wounded by crossfire, including during infighting between government soldiers over control of roadblocks.

In June, fighting between rival clan militias in Kismayo and apparently indiscriminate attacks on civilian buildings caused dozensof civilian casualties. On June 8, three children were killed when a shell struck their house and a local health clinic was damaged.

In government-controlled areas, targeted killings including of traditional elders, civilian officials, and journalists increased. The perpetrators are frequently unknown, although Al-Shabaab is often believed to be responsible. On April 26, Deputy State Attorney Ahmad Shaykh Nur Maalinwas killed in Mogadishu.

In addition, the government’s military court sentenced at least six people—two civilians allegedly linked to Al-Shabaab and four soldiers—to death and executed them in Mogadishu and Beletweyne between July and Augustfollowing trials that raise serious due process concerns.

In the run-up to council elections in the semi-autonomous region of Puntland, which were subsequently postponed, one journalist and two human rights defenderswere killed. There were also executions by Puntland’s military court.

Abuses by Al-Shabaab
Access to, and information about, Al-Shabaab areas is severely restricted, but credible reports indicate that Al-Shabaab has committed targeted killings, beheadings, and executions, particularly of individuals it accused of spying. Al-Shabaab continues to forcibly recruit adults and children, administer arbitrary justice, and restrict basic rights.

Al-Shabaab supporters carried out attacks with improvised explosive devices and grenades and suicide bombings that targeted civilians, particularly in Mogadishu. On April 14, Al-Shabaab attacked Mogadishu's main court complex leaving at least 30 civilians dead, including three lawyers and a judge. A June attack on the UN compound in Mogadishu killed at least 14 people. On September 7, at least 15 people were killed in an attack on Village restaurant, popular among journalists and politicians, for the second time in under a year.

In its most high-profile attack outside Somalia, Al-Shabaab claimed responsibility for a major attack on the Westgate shopping mall, an upscale shopping center in Nairobi, Kenya, on September 21 that killed 67 people (see Kenya chapter).

Sexual Violence
Women and girls face alarming levels of sexual violence throughout the country. Internally displaced women and girls are particularly vulnerable to rape by armed men including government soldiers and militia members. In January, a displaced woman, who alleged that she was raped by government soldiers, and a journalist who interviewed her were prosecuted in a deeply flawed and politicized judicial process. Security forces have also threatened individuals who have reported rape, and service providers.

Reports of sexual exploitation and abuse by AMISOM increased. In a March 2013 resolution, the UN Security Council called on AMISOM to take measures to prevent sexual abuse and exploitation and address allegations of abuse. In August, a woman alleged that she was abducted by soldiers and then transferred to AMISOM soldiers who raped her. A joint Somali and AMISOM high-level task force was established to investigate, during which AMISOM publicly denied the allegations. The alleged victim and witnesses were intimidated by government intelligence agents during the investigation.

Recruitment of Children and Other Abuses
All Somali parties to the conflict continue to commit serious abuses against children, including recruitment into armed forces and arbitrary detentions. Al-Shabaab in particular has targeted children for recruitment and forced marriage, and attacked schools.

Government authorities committed to implementing a July 2012 action plan against child recruitment but discussions about implementation were ongoing at time of writing.

Displaced Persons and Access to Humanitarian Assistance
According to the UN, at least 870,000 people, many of them displaced persons, are still in need of emergency humanitarian assistance. Tens of thousands of displaced people remain in dire conditions in Mogadishu and are subjected to rape, forced evictions, and clan-based discrimination at the hands of government forces, allied militia, and private individuals including camp managers known as “gatekeepers.” Gatekeepers and militias controlling the camps have also diverted and stolen food aid intended for internally displaced persons.

In January, the government announced plans to relocate the capital’s displaced population to new camps in the Daynile district, where Al-Shabaab retains a significant presence, prompting concerns that the new camps would lack basic security and protection, as well as services. Meanwhile, forced evictions of the displaced continue including from camps planned for relocation.

Humanitarian agencies face challenges accessing populations in need due to ongoing attacks and restrictions imposed by parties to the conflict. On April 14, a car bomb exploded on the airport road in Mogadishu hitting cars carrying Turkish aid workers. On August 14, Médecins Sans Frontières (MSF) ended its 22-year operation in Somalia, citing continuing attacks by armed groups and civilian leaders on health workers. Before its departure, MSF had treated about 50,000 people per month and the World Health Organization estimates that 1.5 million people may now lack access to health care.

Attacks on Media
Somalia remains one of the most dangerous countries in the world to be a journalist. Five journalists and media workers were killed in 2013, four of them in Mogadishu. On April 21, Mohamed Ibrahim Raage, a journalist working for the governmental Radio Mogadishu and Somali National Television who had recently returned to Mogadishu from exile in Uganda, was killed outside his home. A number of other journalists were also attacked, including in the town of Kismayo.

Impunity for these killings prevails. One individual was sentenced to death in March for the September 2012 killing of journalist Hassan Yusuf Absuge, and then executed in August after a trial that did not meet international due process standards.

The Puntland authorities temporarily closed media outlets and banned rebroadcasting of certain international programs. In April, the Ministry of Informationbanned Radio Daljir, One Nation, and Codka Nabada (Voice of Peace).

In June, a Somaliland court suspended the popular daily Hubaal upon request of the attorney general. The ban was lifted in August after a presidential pardon. The newspaper’s leadership has been intimidated and harassed, and the editor and managing director were convicted on criminal defamation charges in July.

Key International Actors
In a series of high-profile pledging conferences hosted by the United Kingdom and the European Union in May and September, international donors pledged significant funds to the new government’s reform agenda. The plans included human rights components but no rights monitoring framework.

In November, the UN Security Council authorized the African Union to increase the number of AMISOM forces from17,731 to 22,126and approved the provision of non-lethal support to the Somali forces. Following the September attack on Kenya’s Westgate mall, the United States claimed responsibility for at least one operation against Al-Shabaab inside Somalia.

In addition to their large military presence in Somalia, Kenya, and Ethiopia trained and provided military support to government-affiliated militia. Both focused on the status of border areas such as Lower Juba and Gedo, where they have been particularly involved in tense negotiations over the creation of the Jubaland region. Ahmed Mohamed Islam, known as “Madobe,” a Kenyan ally, was chosen as the head of the interim administration.

Host countries of Somali refugees, particularly Kenya, seized on the apparent improvement of security in Mogadishu and the takeover of certain towns by AMISOM and government forces as grounds for potentially returning Somalis to their country. Furthermore, some EU member countries returned failed Somali asylum seekers to Mogadishu, contending that apparent improvements in Mogadishu meant they no longer needed protection on human rights grounds. The ongoing internal armed conflict in south-central Somalia means EU countries should carefully examine, on a case-by-case basis, whether returning a person to Mogadishu would pose a serious threat to that person.

In September, the European Court of Human Rights declared inadmissible a claim by a rejected Somali asylum seeker, paving the way for his return by Sweden to Somalia. The court failed to give sufficient weight to the ongoing displaced person crisis in Mogadishu and the volatile security situation, both of which could place anyone returned to the capital in serious jeopardy.