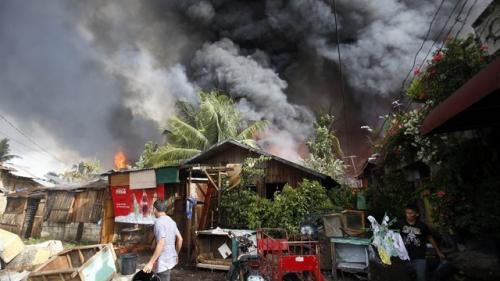 As Philippine President Benigno Aquino III enters the second half of his six-year term in office, there are growing doubts about his administration’s willingness to deliver on many of its human rights commitments.

On January 18, 2013, Aquino signed a landmark law, Republic Act No. 10361, designed to protect the rights of the country’s estimated 1.9 million domestic workers. The Philippines also ratified the International Labor Organization’s Domestic Workers Convention No. 189, which would help protect the rights of the 1.5 million Filipino domestic workers abroad.

Harassment of and violence against leftist political activists and environmentalists continues.

In September, serious fighting erupted in the southern city of Zamboanga between a faction of the Moro National Liberation Front (MNLF), and the Philippine military and police. A reported 161 civilians, MNLF fighters, and government soldiers and police were killed in three weeks of fighting in Zamboanga and neighboring Basilan.  Nearly 120,000 people were displaced by the fighting and remained homeless at time of writing. Many of those relocated to evacuation centers are at risk due to overcrowding and poor sanitation.

The Islamist armed group Abu Sayyaf remains active and engages mainly in kidnappings, including the abduction of two people in September.

The communist New People’s Army (NPA) conducted attacks against government forces in various parts of the country.  The latest proposal for peace talks with the government collapsed in February 2013.

Attacks on Journalists and Criminal Defamation

The Philippines remains one of the most dangerous places in the world to be a journalist. In 2013, seven journalists were killed, according to the Center for Media Freedom and Responsibility, a Manila media advocacy group. Vergel Bico, the 41-year-old editor of Kalahi, a weekly newspaper in Calapan City in the central Philippines, had been writing on the drug trade, among other issues.  Motorcycle-riding assailants fatally shot him in the head on September 4. Nanding Solijon, a broadcaster at radio station DXLS, was shot seven times by two motor-riding assailants as he was crossing a street in Iligan City in Mindanao on August 29. On August 1, gunmen entered the home of photojournalist Mario Sy in General Santos City in Mindanao and shot him twice, killing him. According to local monitors, 18 journalists have been killed since Aquino became president.

Three journalists were convicted of criminal libel in 2013. The most recent, in September, was Stella Estremera, editor-in-chief of Sun Star Davao who, together with the paper’s former publisher, Antonio Ajero, was convicted for a 2003 story identifying people a police report said were suspects in the illegal drug trade in Digos City. The previous month, a columnist for the Cebu City daily theFreeman was convicted of libel for a 2007 column that criticized the governor of Cebu province at the time, Gwendolyn Garcia. The defendants faced prison. Free expression groups urged the Philippine government to decriminalize libel. Several journalists have been imprisoned over the years for criminal defamation.

While there has been a notable decline in extrajudicial killings under the Aquino administration, they remain a serious problem and rarely result in a prosecution.

Killings by “death squads” in urban centers including Metro Manila, Davao City, and Zamboanga City remain a serious problem. The victims are frequently petty criminals, drug dealers and street children. By all accounts these killings largely go uninvestigated and there are no reports of death squad members being prosecuted.

In November 2012, the government announced that it would create a judicial “superbody,” composed of various government and law enforcement agencies, to give priority to the investigation and prosecution of extrajudicial killings. However, the agency was not yet operational at this writing.

President Aquino has not fulfilled his 2010 campaign promise to revoke Executive Order 546, which local officials cite to justify providing arms to their “private armies.”

The trial in the Maguindanao Massacre case, in which 58 people linked to a local politician and journalists were summarily executed by members of the Ampatuan political clan in Maguindanao province, continued in 2013. However, families of victims were increasingly impatient at the slow pace of the trial. Four years after the killings, the court is still hearing the bail petitions of several of the suspects. In August, five more suspects were arraigned, including the operator of the backhoe that was used to bury the victims. Of 197 identified suspects, 107 have been arrested, all but 6 of whom have been indicted.

A faction of the MNLF took children hostage and used them as human shields during the fighting in Zamboanga City. Several children were killed and wounded. A 15-year-old boy brought by his family to attend a “peace rally” was taken by MNLF rebels when fighting broke out and was forced to help the rebels feed their hostages. Two other children were arrested on suspicion that they were MNLF rebels.

The Supreme Court suspended implementation of the country’s landmark Reproductive Health Law following a legal petition from individuals and lay Catholic groups opposing the law. Hearings on the law were ongoing at time of writing. Women’s rights advocates point out that the petition delayed government funding for family planning services and reproductive rights education.

The Philippines’ verbal conflict with China heightened in 2013, with increasingly heated rhetoric from both sides over disputed territory in the South China Sea. As a result of China’s alleged incursions into territory claimed by the Philippines, the Aquino government turned for help to the United States, which promised to help finance modernization of the Philippines’ antiquated naval defense system. Several US senators sought to restrict military assistance to the Philippine army because of continuing rights violations and lack of accountability.