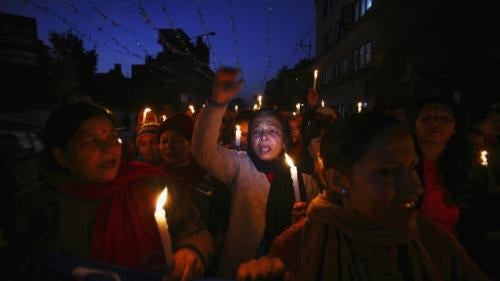 Elections held in November to elect the second Constituent Assembly were considered free and fair by international observers. The United Communist Party of Nepal (Maoist)  suffered a significant loss in seats from 2008, while the more centrist Congress and United Marxist Leninist parties gained significantly. But the year saw little human rights progress and new setbacks to efforts to end impunity for abuses committed by both government and Maoist forces during the country’s 1996-2006 civil war. A decline of more than 5 million in the number of registered voters since the last Constituent Assembly elections in 2008  raised concerns that millions of Nepalis were being disenfranchised.

A new Truth and Reconciliation Commission established to address the war years is deeply flawed and, unless reformed, unlikely to answer repeated calls for accountability and justice from victims, rights groups, and the international community. At least 13,000 people were killed and over 1,300 subjected to enforced disappearance during the decade-long conflict. Political leaders have shown little interest in justice, with Maoist leaders even threatening an elderly couple that went on hunger strike to demand an investigation into their son’s 2004 murder. An interim relief program providing financial compensation and other benefits to individuals whose family members were killed or disappeared during the conflict did not extend to victims of torture and sexual assault.

Nepal has made significant progress in protecting the rights of lesbian, gay, bisexual, transgender, and intersex (LGBTI) individuals in the last decade, but 2013 saw troubling instances of private actor violence and seemingly arbitrary arrest of LGBTI activists. Women, migrant workers, people with disabilities, and members of disadvantaged communities such as Dalits continue to be marginalized and suffer discrimination.

Instead of taking steps to ensure the prosecution of those responsible for the worst crimes committed during the country’s civil war, the cabinet pushed an ordinance that could lead to amnesty for perpetrators. Nepal’s Truth, Reconciliation and Disappearance Ordinance, signed into law by the president in March 2013, calls for a high-level commission to investigate serious conflict-related violations. The law does not define which crimes are eligible for amnesty and which are excluded, giving commissioners potentially wide discretion to make determinations. As a result, some perpetrators of torture, war crimes, and crimes against humanity could win amnesties in contravention of international law.

The high-level commission has yet to be formed, and in April the Supreme Court suspended the ordinance pending further review.

In September, after mounting national and international pressure, the police finally announced an arrest for the 2004 abduction and murder of Krishna Adhikari. In August 2013, Adhikari’s parents had begun a hunger strike demanding information about their son’s murder, allegedly at the hands of Maoist forces. Threats by the Maoist leadership did not deter the fasting couple.

In December 2012, a female migrant worker returning from Saudi Arabia was raped by an airport police constable in Kathmandu, sparking widespread protests. On December 27, protesters gathered near the prime minister’s residence beginning “Occupy Baluwatar,” a movement named after the neighborhood. Due in part to intense public pressure, the police constable responsible for the rapes was sentenced in April to five-and-a-half years in prison.

Women’s rights groups demanded fast-track courts to deal with cases of gender-based violence, and a review of the 35-day limitation period on filing police complaints, which restricts the ability of victims to seek redress. A government review committee submitted a report in April on laws and policies related to violence against women, but the government had not acted on its recommendations at time of writing.

The government also has not yet investigated credible allegations of sexual violence during the 1996-2006 conflict, and has not included sexual assault victims in its interim relief compensation program.

As part of the Occupy Baluwatar movement, women’s groups called for a review of Nepal’s migration policies, which currently lack adequate protections. Rights groups demanded that the government revoke an August 2012 decree banning women under age 30 from traveling to Gulf countries for work. The ban was imposed to protect Nepali domestic workers from physical or sexual abuse, but rights groups fear that it will push women to migrate through informal channels and increase the risk of abuse.

However, disability rights activists say they have been excluded from the political process, and that recently enacted constitutional amendments have not addressed their concerns.

The government has advanced transgender and intersex rights in the last decade by recognizing a third category on official documents. Nevertheless, the government failed to prevent an escalation in threats and violent attacks on LGBTI rights activists in 2013. In early February, four transgender women were arrested under the Public Offense Act, a vaguely worded law that can result in up to 25 days in detention and a fine amounting to more than US$300.

Authorities did little to investigate threatening phone calls and harassment of members of the Blue Diamond Society, the national LGBTI umbrella organization. It instead launched an investigation into the organization for alleged corruption, despite the fact it had passed third party audits and inspections. The group’s 2012-2013 license renewal process was delayed and its bank accounts frozen, temporarily halting its health and human rights work.

Nepal failed to reform its citizenship laws in 2013, leaving an estimated 2.1 million people effectively stateless, unable to secure drivers’ licenses, passports, bank accounts, or voting rights. The flawed citizenship law makes it particularly difficult for women to secure legal proof of citizenship, especially when male family members refuse to assist them or are unavailable to do so, and it denies citizenship to children of non-Nepali fathers.

The international community, including India, the United Kingdom, United States, and European Union pressed the government to announce and conduct free and fair elections and end the political deadlock that has paralyzed governance in Nepal.

China increased financial assistance to Nepal, but demanded that the government curb protests by Tibetans and other “anti-China” activities.

In a positive move, in January 2013 the UK arrested a Nepali army colonel suspected of torture during the civil war.

UN High Commissioner for Human Rights Navi Pillay called for an independent and impartial investigation into serious violations of international law during the country’s 10-year conflict, and expressed concern that the Truth, Reconciliation and Disappearance Ordinance could allow perpetrators of serious crimes to obtain amnesties. “Such amnesties would not only violate core principles under international law but would also weaken the foundation for a genuine and lasting peace in Nepal,” Pillay said.