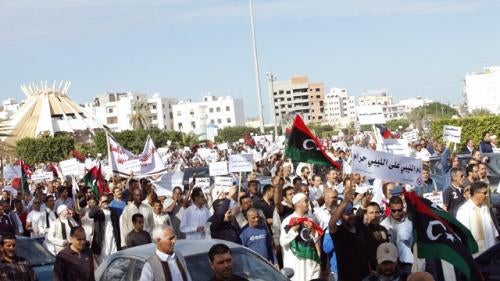 Libya’s interim government faced multiple challenges in 2013. Myriad armed groups controlled security in many parts of the country, thousands of detainees remained in government and militia-controlled detention facilities without access to justice, and rampant ill-treatment and deaths in custody persisted. Forced displacement of tens of thousands of people from the town of Tawergha by militias from nearby Misrata had yet to be resolved.

Authorities failed to conclude any investigations into politically motivated assassinations, attacks on protesters in Benghazi and Tripoli, and attacks on journalists and foreign diplomatic missions, citing lack of resources and the precarious security situation.

The General National Congress (GNC), Libya’s first elected parliament, has yet to fulfill its core mandate to organize elections for the Constituent Assembly (CA). On July 16, the GNC approved a law for electing the 60-member CA, which will draft Libya’s constitution but at time of writing the law had not been issued, and the elections date had not been fixed.

The GNC suffered from political discord between its main political parties, in particular the Muslim Brotherhood-affiliated Justice and Construction Party (JCP) and the more liberal leaning National Forces Alliance (NFA); resignations by some Congress members; and removal of some congress members due to a sweeping lustration law that banned from office persons who had held any office in the Gaddafi era.

The interim government failed to control deteriorating security in the country, especially in the capital, Tripoli, and in Benghazi, Libya’s second largest city.

Myriad armed groups with varying agendas and allegiances, some affiliated with the government, controlled large swathes of the country and its resources—including Libya’s oil terminals, its main income source—and operated with impunity. The government failed to demobilize militias or merge fighters who fought against Muammar Gaddafi’s forces in the 2011 uprising into government forces with proper vetting procedures.

Authorities “contracted” militias, comprised of former revolutionary fighters, to help impose order, instead of prioritizing establishing a military and police force. These militias, including the Libya Shield Brigades and the Supreme Security Committee (SSC) that operated under the army chief of staff and Interior Ministry respectively, operated parallel to state security forces.

Attacks by unknown groups increased against foreign diplomatic missions in Tripoli and Benghazi, including the Tripoli embassies of France and the United Arab Emirates, and the Egyptian consulate in Benghazi.

Criminal investigation units under the police and Prosecutor’s Office failed to arrest suspects or complete investigations into at least 30 seemingly politically-motivated assassinations. Authorities cited lack of capacity and the security situation as reasons for their inaction.

Tribal clashes among various armed groups, mostly vying for territorial control, increased in the Nafusa Mountains; Zawiya and Warshafana on the west coast; Sirte in center of the country; and in Kufra and Sebha in the south. Different militias clashed frequently in Tripoli.

There was an increase in violence in Tripoli in November when militias mainly from Misrata attacked overwhelmingly peaceful protesters. In ensuing clashes, 51 people died and more than 500 were injured. This prompted the government to implement law 27/2013 and law 53/2013 which called on all “illegitimate” armed formations to disband.

Violence escalated in the east, particularly in Benghazi and Derna, as armed groups with a religious agenda and other militias increased attacks on the government. In June, 31 protesters, some armed, were killed during clashes outside the Benghazi headquarters of the government-aligned Libya Shield Forces militia. The protesters were demonstrating against the militia’s presence in city and its alleged abuses, such as arbitrary detentions.

The Cyrenaica Transitional Council, headed by Ahmed Zubair al-Senussi, and the Political Bureau of Cyrenaica, headed by Ibrahim Jadhran—two rival political groups with a military wing calling for an autonomous federalist form of government—competed for recognition in Libya’s Eastern region. After months of occupying vital oil terminals in the East, Jadhran announced a parallel rival government on October 24, and created a “National Oil Company” to rival Libya’s central national oil company.

Libya’s south remained a closed military region throughout 2013. Lack of border control and tribal infighting destabilized the region and trafficking of humans, drugs, and weapons with neighboring Chad and Algeria surged.

Around 8,000 detainees held in relation to the 2011 armed conflict are still in detention facilities; around 3,000 of these are held in government custody, the rest by militias. Most have no access to lawyers or judicial reviews. Militias were responsible for continuing widespread abuses, and some deaths, in custody.

The judicial police, tasked with running detention facilities, remained weak and ill-equipped. There were at least two prison riots in Tripoli and Benghazi, including one at al-Roueimy prison in Tripoli in September when authorities wounded at least eight detainees with live fire. Armed groups attacked at least two convoys transferring detainees between their prison and a Tripoli court. Numerous prison breaks occurred in Sabha. In Benghazi, 1,20o detainees managed to escape after a riot in August.

Migrant workers from sub-Saharan Africa and South Asia continued to face harassment by militias, arbitrary arrests by militias and government forces, and forced labor by criminal gangs and militias.

The judicial system continued to face considerable challenges, including the slow pace of screening detainees and transferal to state custody. Prosecutors’ inability to bring conflict-related cases to court and gaps in the judiciary’s application of fair trial standards also plagued the system.

Militias subjected judges, prosecutors, lawyers, and witnesses to threats and violence, which authorities failed to challenge. At time of writing, the general prosecutor had not concluded an investigation into the killing of Muammar Gaddafi and his supporters in October 2011.

On September 19, Libyan authorities started the pre-trial stage of domestic proceedings against one of Gaddafi’s sons, Saif al-Islam Gaddafi, his intelligence chief, Abdullah Sanussi, and 36 other senior Gaddafi-era officials. They faced charges of murder, torture, and indiscriminate killings committed during the 2011 uprising. The trials of these former officials were expected to start in December.

At time of writing, the GNC had yet to pass the draft transitional justice law, which calls for a commission to investigate abuses, refer perpetrators for prosecution, and compensate victims directly. It would cover abuses committed during the Gaddafi era and during the transitional phase following the 2011 conflict. A draft law that would provide some compensation for mainly female victims of physical and sexual violence had yet to pass.

Military and civil courts imposed at least 28 death sentences, 12 of them passed in absentia, since Gaddafi’s fall in October 2011. The Misrata Military Court sentenced two members of Gaddafi’s military to death for violations committed during the 2011 conflict, including indiscriminate attacks against civilians and torture. A civil court in Misrata sentenced a former Gaddafi official and pro-Gaddafi fighter to death for unlawful killings during the 2011 uprising. Civil courts in Misrata, Benghazi, Zawiya, and Tripoli sentenced 12 civilians to death on charges related to the 2011 conflict and common crime charges, including murder. Lawyers and family of the accused alleged serious due process violations, including the inability to call defense witnesses. The Supreme Court had yet to approve the death sentences at time of writing.

Saif al-Islam Gaddafi and Abdullah Sanussi, who are wanted by the International Criminal Court (ICC) for crimes against humanity, remained in Libyan custody, without access to lawyers.

Libya filed a legal bid at the ICC to prosecute Gaddafi domestically in May 2012, and was told it could postpone surrendering him to the court until the ICC made its decision. In May 2013, the ICC judges rejected Libya’s bid and reminded the Libyan authorities of their obligation to surrender him. Libya has appealed the decision rejecting its bid.

On October 11, the ICC ruled Sanussi’s case inadmissible thereby granting Libya the right to try him domestically. Sanussi’s lawyers at the ICC appealed that decision. At time of writing, the ICC had yet to rule on the appeal.

Approximately 35,000 people from the town of Tawergha, in Libya’s northeast, remained forcibly displaced at the end of 2013, with militias from nearby Misrata preventing them from returning to their homes. The militias accuse Tawerghans of supporting Gaddafi and committing serious crimes, including rapes and torture, against people in Misrata in 2011.

Militias mainly from Misrata continued to arbitrarily detain, torture, harass, and kill Tawerghans in custody. At time of writing, 1,300 people from Tawergha were detained, mainly in Misrata, or unaccounted for. The same militias also prevented residents of Tomina and Karareem, towns near Tawergha, from returning home.

Freedom of Speech and Expression

Attacks on journalists increased amid instability. In August, unknown assailants killed a journalist in Benghazi, two other journalists escaped separate assassination attempts. Throughout the year, militias threatened and beat scores of other media workers, mainly in Tripoli and Benghazi

An editor of al-Ummah newspaper faced charges of insulting members of the judiciary after he published a list of allegedly corrupt judges and prosecutors. If found guilty, he could face up to 15 years in jail.

Attacks on Sufi religious sites across the country continued in 2013, although fewer in number than in 2012. Authorities made no effort to protect the religious sites of minorities or arrest those responsible for attacks. In August, unknown persons desecrated Sufi graves in Tripoli and, in September, desecrated a Sufi gravesite in Mizdah, southern Libya. In September, a Sufi religious leader was assassinated by unknown gunmen in the Eastern city of Derna.

In February, Libya’s Supreme Court lifted restrictions on polygamy, enabling a man to marry up to four wives without the prior consent of his first wife. In April, the Ministry of Social Affairs suspended issuing marriage licenses for Libyan women marrying foreigners after a call by Grand Mufti al-Sadeq al-Ghariani to avoid spreading “other” religions in Libya. In the absence of a Personal Status Law, the law Concerning the Specific Provisions on Marriage and Divorce and their Consequences, Law No. 10 of 1984 is the only current legislation dealing with domestic violence, but enforcement remains weak.

After months of controversy, the GNC in May passed the Political Isolation Law, barring Gaddafi-era officials from holding public office for 10 years. The law’s sweeping provisions, vague procedures, and lack of judicial review, meant it violated human rights standards. Armed groups surrounded the Foreign Affairs, Justice, and Interior ministries, as well as the GNC, demanding that the GNC pass the law.

The United States, European Union countries, and the United Nations played significant roles throughout the year. In May, the EU signed a border assistance agreement with Libya supporting border security efforts. The US, UK, Germany, France and Italy expanded cooperation, particularly in the security sector, although promised trainings of security forces for the most part did not materialize.

In March, the UN Security Council adopted resolution 2095, which extended the mandate of the United Nations Mission to Libya (UNSMIL) for one more year. The resolution modified the arms embargo to allow Libyan authorities access to non-lethal weapons and equipment in certain circumstances. Also in March 2013, the UN Human Rights Council (HRC) adopted a resolution that urged the government to implement reform, but failed to condemn ongoing and serious violations. The HRC asked the UN High Commissioner for Human Rights to report back in March 2014 on the situation on the ground.

On May 8, the US, UK, and France expressed concern for the armed protests and violence during the democratic transition. On September 10, the US, UK and Italy issued a statement supporting the Libyan government in its efforts to restore security and build its institutions and cautioning against disruption of Libyan oil exports due to protests by armed groups at Libya’s main exporting oil terminals.

In response to ongoing insecurity, the US, UK, France, Italy, and Turkey announced plans to train more than 8,000 militia members for a General Purpose Force to be merged into Libya’s army and police forces.