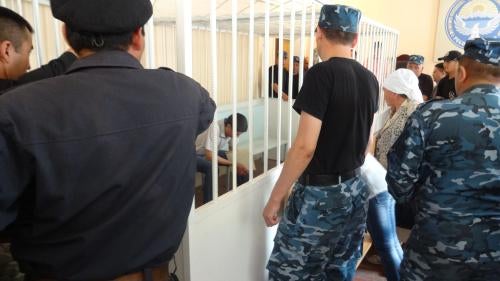 Shortcomings in law enforcement and the judiciary contribute to the persistence of grave abuses in connection to the ethnic violence in southern Kyrgyzstan in June 2010. Ethnic Uzbeks and other minorities remain especially vulnerable. Courtroom attacks on lawyers and defendants, particularly in cases related to the June 2010 events, occur with impunity.

Government officials and civil society representatives formed a national center for the prevention of torture in 2013. In practice, ill-treatment and torture remain pervasive in places of detention, and impunity for torture is the norm.

Three years on, justice for crimes committed during the ethnic violence in southernKyrgyzstan in June 2010 remains elusive. The flawed justice process has produced long prison sentences for mostly ethnic Uzbeks after convictions marred by torture-tainted confessions and other due process violations. Authorities have not reviewed convictions where defendants alleged torture or other glaring violations of fair trial standards. At least nine ethnic Uzbeks continue to languish in pretrial detention, some for a third year. New convictions in August 2013 of three ethnic Uzbeks in Osh, and pending extradition orders of at least six others in Russia again point to judicial bias against ethnic Uzbeks.

The authorities failed to tackle the acute problem of courtroom violence by audiences in trials across Kyrgyzstan, including at the trial of three opposition members of parliament in June, perpetuating an environment that undermines defendants’ fair trial rights. Lawyers were harassed or beaten in court in 2013, including for defending ethnic Uzbek clients in June 2010 cases. Mahamad Bizurukov, an ethnic Uzbek defendant, and his lawyers have been subjected to repeated threats, harassment, and physical attacks for two years, most recently in September 2013, with no accountability for perpetrators.

Despite the adoption of a national torture prevention mechanism in 2012, and the organization of a related National Center for the Prevention of Torture in 2013, authorities often refuse to investigate allegations of torture and perpetrators go unpunished. On rare occasions when charges are filed against police, investigations, and court proceedings are unduly protracted.

A telling example is the criminal case against four police officers following the August 2011 death of an ethnic Uzbek detained on charges related to the June 2010 ethnic violence. Usmonjon Kholmirzaev died several days after his release without charge, apparently from injuries he sustained from beatings in custody. The prosecution has been subjected to repeated delays over the last two years and no one has yet been held accountable for his death.

In July 2013, Nurkamil Ismailov was found dead in a temporary detention facility in southern Kyrgyzstan after police detained him for disorderly conduct. Authorities alleged he committed suicide by hanging himself with his t-shirt. The Jalalabad-based human rights group Spravedlivost intervened after which authorities opened a criminal investigation on charges of negligence. In September, Ismailov’s relative and the police settled out of court for an undisclosed sum, with no admission of liability.

In April 2013, internet providers in Kyrgyzstan lifted a 14-month ban on the independent online Central Asian news agency Ferghana.ru, after Kyrgyzstan’s state media agency wrote a letter stating its previous notice urging providers to block Ferghana.ru was only a recommendation, not compulsory.

In June, OSCE representative on freedom of the media, Dunja Mijatovic, noted Kyrgyzstan’s “progress in promoting media freedom and freedom of expression.” Mijatovic urged authorities to bring to justice individuals responsible for the 2007 death of journalist Alisher Saipov, whose killers have not been identified.

Although Osh-based Yntymak Radio began broadcasting in Russian, Kyrgyz, and Uzbek languages in March 2012, concerns persist regarding restrictions on Uzbek-language media in southern Kyrgyzstan. In March 2013, the UN Committee on the Elimination of Racial Discrimination (CERD) noted “that the use of minority languages in media has decreased in particular in the Osh region.” In July, an Osh court banned the Uzbek-language news site Harakat.net for allegedly inciting racial hatred.

The authorities’ approach to long-standing problems of gender-based violence, including domestic violence and bride abduction, remains ineffective. In December 2012, the Kyrgyz legislature adopted an amendment to increase the maximum jail sentence for bride-kidnapping from three to seven years (10 years if the girl is younger than 17).

In 2013, Labrys and Kyrgyz Indigo, LGBT rights groups, documented at least four new cases of police extortion and harassment of at least seven LGBT people. Gay and bisexual men are at particular risk of extortion, beating, and sexual violence. They rarely report abuses to the authorities due to fear of disclosure and retaliation, and abuses largely go unpunished. In March, unidentified assailants attacked two Labrys staff in Bishkek at a disco; one suffered a concussion. Police initially refused to register their complaint, which alleged the attack was a hate crime, and had yet to investigate at time of writing.

On November 17, 2012, agents of the State Committee on National Security (GKNB) temporarily detained an international staff member of the International Crisis Group (ICG), an international NGO working on peace and security issues, and without explanation, illegally searched and interrogated him, and confiscated his computer. He was later expelled from Kyrgyzstan. The GKNB later summoned five people for questioning apparently in connection with the ICG’s work.

In 2013, the government sought to tighten control over civil society, proposing three legislative amendments that would impose burdensome reporting obligations and restrictions on civil society groups. Activists successfully lobbied to remove discriminatory provisions from two proposals. The third would require groups accepting foreign funding to register and identify themselves publicly as “foreign agents.” At time of writing, it had not been reviewed by parliament.

In May, human rights lawyerUlugbek Azimov, an ethnic Uzbek, and two members of his family were viciously assaulted after a traffic incident in Bishkek. Police found and prosecuted one of the attackers, but others remain at large. Azimov’s colleagues believe the attack may have been ethnically-motivated.

Azimjon Askarov, a human rights defender who worked to document police treatment of detainees, continues to serve a life sentence, despite a prosecution marred by serious violations of fair trial standards. Askarov was found guilty of “organizing mass disorders,” “inciting ethnic hatred,” and taking part in killing a police officer on June 13, 2010. Despite repeated complaints filed by Askarov’s lawyer, including in 2013, prosecutorial authorities have refused to investigate Askarov’s credible allegations of torture in custody. Askarov’s November 2012 complaint to the United Nations Human Rights Committee is under review.

In recent years, Kyrgyzstan’s efforts to host refugees and asylum seekers have been undermined by the government’s failure to implement fully its obligations to protect the rights of asylum seekers and refugees from Uzbekistan. After a long court battle, in May 2013, a Bishkek court overturned the Prosecutor General’s Office’s extradition order for Khabibullo Sulaimanov, a former Imam from Uzbekistan, after he was granted refugee status by the United Nations High Commissioner for Refugees. In February, Shukhrat Musin, a refugee from Uzbekistan who fled religious persecution, was reported missing in Bishkek. In October, he was located in a pretrial detention center in Andijan, Uzbekistan.

Kyrgyzstan’s partners raised human rights concerns throughout the year, but did not consistently seize opportunities to urge concrete improvements.

Statements issued by European Union leaders on the occasion of Kyrgyz president’s September 2013 visit to Brussels noted challenges in upholding the rule of law and the rights of minorities, but stopped short of urging any concrete improvements. The ministerial-level cooperation council meeting with Kyrgyzstan, held in November, urged “further steps to address human rights concerns,” stressing “inter-ethnic reconciliation” and the “significant role” played by civil society.

In December 2012, German Chancellor Angela Merkel specifically noted concern about Azimjon Askarov’s imprisonment and the rights of ethnic minorities. During a Kyrgyzstan visit in May, UN Assistant Secretary General for Human Rights Ivan Simonovic raised Askarov’s case, violence against women, and the need to address discrimination on grounds of ethnicity, religion, and gender.

Following her mission to Kyrgyzstan in April 2013, UN special rapporteur on the sale of children, child prostitution, and child pornography, Najat Maalla M’jid, highlighted the country’s insufficient protection of children from violence, exploitation, and abuse, and urged law enforcement agencies to do more to investigate, prosecute, and punish perpetrators.

In its March 2013 concluding observations, the Committee on the Elimination of Racial Discrimination (CERD) voiced serious concerns about the treatment of ethnic minorities in Kyrgyzstan, including due process violations in court proceedings following the June 2010 violence, allegations of torture, restrictions on Uzbek-language media, and violence against ethnic minority women. The committee also noted a few positive developments, including the adoption of a policy on inter-ethnic relations.

During its review of Kyrgyzstan in November, the UN Committee Against Torture noted that “[fundamental safeguards] were not upheld in practice” and expressed “serious concern about prison conditions.”