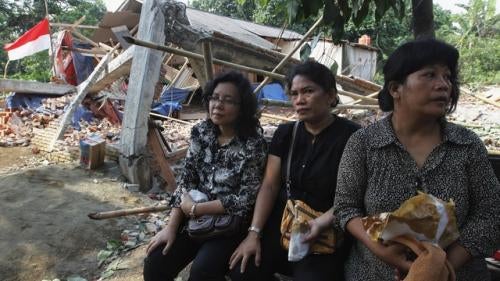 Although the president made public appeals for greater religious freedom and tolerance, national authorities continued to respond weakly to growing violence and discrimination against religious minorities. Other areas of concern include new onerous restrictions on the activities of nongovernmental organizations (NGOs), the proliferation of local decrees that violate women’s rights, and mistreatment of the increasing number of refugees and migrants, including unaccompanied migrant children, reaching Indonesia.

Forestry sector reforms made some headway in 2013, but timber concessions on lands with pre-existing community claims continue to generate rural conflict and abuse. Corruption and mismanagement deprive government coffers of billions of dollars in forest revenues, and threaten Indonesia’s ability to deliver on its “green growth” promises.

Conditions in Papua, still virtually off-limits to foreign journalists, remain volatile, with security forces enjoying virtual impunity for abuses, including excessive and at times lethal use of force against peaceful proponents of independence. Meanwhile, the armed Free Papua Movement, though small and poorly organized, continues to carry out attacks against government forces.

Local elections in Indonesia in recent years have resulted in the emergence of young politicians, including Jakarta’s governor Joko Widodo, who have pledged to break with traditional patronage-style politics by tackling corruption, poverty, and crumbling infrastructure. National parliamentary and presidential elections scheduled for 2014 will give an indication of whether these politicians reflect a national trend.

The Alliance of Independent Journalists documented 23 cases of violence against journalists in the first six months of 2013. They included a March 2 attack on Normila Sari Wahyuni of Paser TV while she was covering a land dispute in Rantau Panjang village in East Kalimantan. The assailants repeatedly kicked her stomach, prompting a miscarriage.  Police later arrested a village chief and village secretary as suspects in the assault. On March 27, supporters of Gorontalo mayor, Adnan Dhambea, burned down the office of the local TV station,TVRI Gorontalo, following Dhambea’s defeat in local elections. Two TVRI journalists were assaulted during the arson attack.

On July 2, Indonesia’s parliament enacted a new law on NGOs that infringes on rights to freedom of association, expression, and religion. The law imposes a variety of vague obligations and prohibitions on NGO activities, severely limits foreign funding of NGOs, and forbids NGOs from espousing atheism, communism, Marxist-Leninism, beliefs deemed contrary to Pancasila, the state philosophy.

In a positive step, the government in August signaled a possible end to the informal national taboo on public discussion of the army-led massacres of between 500,000 and over a million communist party members and alleged sympathizers in 1965-66 by allowing the release of the award-winning documentary on the massacre, The Act of Killing, as a free Internet download.

A military court in September sentenced 12 members of the Special Forces Command (Komando Pasukan Khusus, Kopassus) to prison terms of between several months and 11 years for their role in the well-orchestrated murder of four detainees in a prison in Yogyakarta. The guilty verdicts marked an important departure from the usual impunity enjoyed by soldiers implicated in serious crimes, but the sentences imposed on the three most culpable soldiers failed to match the gravity of their crimes.

A gender equality bill first submitted to parliament in 2009 remained stalled in 2013 due to opposition from Islamist politicians.

These regulations include one banning women from straddling motorcycles—only riding side-saddle is permitted—in Lhokseumawe, Aceh. In neighboring Bireuen, a local regulation prohibits women from dancing. In Gorontalo, Sulawesi Island, the government transferred its entire female support staff to other offices in July, replacing them with men as part of an initiative to discourage “extramarital affairs.”

President Yudhoyono has repeatedly called Indonesia “a moderate Muslim democracy.” On May 31, Yudhoyono said his government “would not tolerate any act of senseless violence committed by any group in the name of the religion” and on August 16 said he was "very concerned" about rising religious intolerance and related violence.

Despite the rhetoric, the Yudhoyono administration has failed to enforce Supreme Court decisions against local officials who have long blocked building permits for the Christian churches in Bogor and Bekasi. It also maintains dozens of regulations, including ministerial decrees on building houses of worship and a decree against religious practice by the Ahmadiyah community, which discriminate against religious minorities and foster intolerance.

According to the Jakarta-based Setara Institute that monitors religious freedom, there were 264 attacks on religious minorities in 2012 and 243 cases in the first 10 months of 2013. The perpetrators were almost all Sunni militants; the targets include Christians, Ahmadiyah, Shia, and Sufis.

On March 21, Bekasi authorities bowed to the demands of the local Islamic People’s Forum and demolished a church built by the Batak Protestant Christian Church. The church had fulfilled local requirements, but had been denied a building permit for five years running due to pressure from groups opposed to all church construction in the area.

On June 20, a mob of more than 800 Sunni militants pressured local authorities to evict hundreds of displaced Shia villagers from a stadium in Sampang, Madura, where they had been living since August 2012 aftermore than 1,000 Sunni villagers attacked their homes, killing one resident. The displaced Shia villagerswere then forcibly driven to an apartment building that the government had prepared in Sidoarjo, Java, three hours away.

On September 11, a long-simmering dispute between two Muslim communities in Puger in East Java’s Jember regency boiled over into violence when a group of 30 machete-wielding militants vandalized the local Darus Sholihin Islamic boarding school. More than 100 policemen at the scene failed to intervene. An hour later, one of those militants, Eko Mardi Santoso, 45, was found dead on the village pier with machete wounds to his face and torso after an apparent revenge attack.

As of August, according to the “Papuans Behind Bars” website, 55 Papuans were imprisoned for peaceful advocacy of independence. Indonesia denies holding any political prisoners.

On April 30, police fired upon a group of Papuans who had gathered in Aimas district, near Sorong, for a prayer gathering to protest the 1963 handover of Papua to Indonesia from Dutch colonial rule. One account said police opened fire when protesters approached police vehicles that had arrived at the scene. Two men were killed on the spot; a third victim died six days later from gunshot wounds. Police detained at least 22 individuals and charged 7 of them with treason. The other 15 were subsequently released.

In May the Sydney Morning Herald reported that thousands of Papuan children, mostly Christians, had been induced to leave Papua to attend Islamic schools in Java for religious “re-education” over the last decade. The program has resulted in large numbers of Papuan children fleeing the schools and living destitute in major cities.

Human rights abuses in Papua were in the spotlight during the Asia Pacific Economic Cooperation summit in Bali on October 6 after three Papuan activists scaled a wall and entered the Australian consulate. Markus Jerewon, Yuvensius Goo, and Rofinus Yanggam demanded that Indonesia lift travel restrictions on international visitors and release political prisoners.

In May, the Constitutional Court declared unconstitutional a provision of the 1999 Forestry Law that includes customary territories within state forests. The landmark decision rebuked the Ministry of Forestry for allocating community lands as concessions to logging and plantation companies.

Indonesia is a transit point to Australia for refugees and asylum seekers fleeing persecution, violence, and poverty in countries including Somalia, Afghanistan, Pakistan, and Burma. As of March 2013, there were almost 10,000 refugees and asylum seekers in Indonesia, all living in legal limbo because Indonesia lacks an asylum law. This number includes an unprecedented number of unaccompanied migrant children; more than 1,000 such children arrived in Indonesia in 2012 alone.

While Indonesia delegates the responsibility for refugees and asylum seekers to the office of United Nations High Commissioner for Refugees (UNHCR), it often refuses to release even UNHCR-recognized refugees from detention centers, where conditions are poor and mistreatment common. Those who are released face constant threat of re-arrest and further detention.

On May 8, Germany approved the sale to Indonesia of 164 tanks, including 104 Leopard 2 battle tanks. On August 25, US Defense Secretary Chuck Hagel disclosed a $500 million deal to sell eight Apache attack helicopters to Indonesia, which he said was aimed at strengthening military ties as part of the US "pivot" towards the Asia-Pacific.

On September 30, new Australian Prime Minister Tony Abbott made Jakarta his first foreign visit, seeking better trade relationships and cooperation over migration and people smuggling. Abbott failed to raise human rights concerns in discussions in Jakarta and, several days later, when three Papuan activists entered the Australian consulate during the APEC summit in Bali, he took the opportunity to denounce Papuans who “grandstand” against Indonesia and then dangerously conflated an attempt to spotlight human rights violations with Papuan separatism.

Indonesia signed a timber trade agreement with EU on September 30, requiring that timber exported to the EU be certified as legally produced, an important step in combatting illegal logging. The agreement, however, does not require any assessment of whether the timber is produced in violation of community land rights or rights to compensation, an important source of conflict and human rights abuse.

A visit by the UN special rapporteur on freedom of expression, Frank La Rue, scheduled for January 2013 was postponed over Jakarta’s objection to his plan to visit Papua; no new date had been set at this writing.