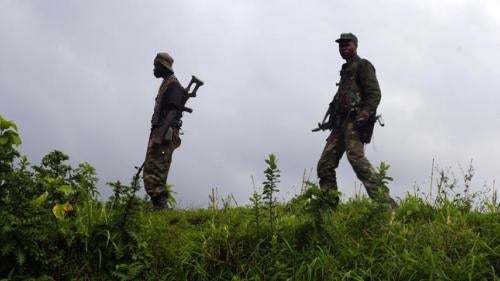 In the capital, Kinshasa, and elsewhere, government authorities have sought to silence dissent with threats, violence, and arbitrary arrests against human rights activists, journalists, and opposition political party leaders and supporters who were critical of government officials or participated in anti-government demonstrations.

In March, M23 leader and former Congolese military commander Bosco Ntaganda surrendered to the United States embassy in Rwanda. He is awaiting trial at the International Criminal Court (ICC) on charges of war crimes and crimes against humanity committed in northeastern Congo in 2002 and 2003. One of the region’s most brutal warlords, Ntaganda commanded forces that terrorized civilians for the past decade.

Abuses by the Security Forces

When government soldiers fled the M23’s advance on the eastern city of Goma in late November 2012, they went on a rampage and raped at least 76 women and girls in and around the town of Minova, South Kivu. In Kitchanga, North Kivu, soldiers from the 812th Regiment, allied with a Tutsi militia they had armed, clashed with a primarily ethnic Hunde armed group in late February through early March. At least 25 civilians died in the fighting. Many of the civilians killed were Hunde who appear to have been targeted by soldiers because of their ethnicity. Security forces also deliberately killed civilians during operations against Mai Mai fighters in Katanga province.

Military and intelligence officials detained many former M23 fighters and alleged collaborators for several weeks without bringing them before a court, often incommunicado and in harsh conditions.

During their occupation of Goma and nearby areas in late November 2012, M23 fighters summarily executed at least 24 people, raped at least 36 women and girls, looted hundreds of homes, offices, and vehicles, and forcibly recruited soldiers and medical officers, police, and civilians into their ranks. The M23 withdrew from Goma on December 1 when the government agreed to start peace talks in Kampala, Uganda.

Following infighting between two M23 factions and Ntaganda’s surrender in March, abuses by the M23 continued. Between March and July, M23 fighters summarily executed at least 44 people and raped at least 61 women and girls. In August, after intense fighting resumed between the M23 and the Congolese army supported by MONUSCO, the UN peacekeeping mission in Congo, the M23 shelled populated neighborhoods in and around Goma, killing at least 7 civilians and wounding more than 40.

Since its inception, the M23 had received significant military support from Rwanda, including the deployment of Rwandan troops to Congo to fight alongside it; weapons, ammunition, and other supplies; training for new M23 recruits; and the forcible recruitment of men and boys in Rwanda, who were then sent across the border to fight for the M23.

Following public denunciations and aid suspensions to Rwanda by Western allies, when fighting resumed in late October, the M23 did not receive the military support from Rwanda on which it had previously relied. The rebels were quickly defeated by the Congolese army and UN forces. On November 5, the M23 announced an end to its armed rebellion. Many of its remaining leaders and fighters fled to Uganda and Rwanda.

Attacks on Civilians by Other Armed Groups

Numerous other armed groups have carried out horrific attacks on civilians in eastern Congo, including in North and South Kivu, Katanga, and Orientale provinces. Fighters from the Nduma Defense of Congo militia group, led by Ntabo Ntaberi Sheka, killed, raped, and mutilated scores of civilians between May and September in Masisi and Walikale territories, North Kivu. Sheka is sought on a Congolese arrest warrant for crimes against humanity.

Other armed groups have also carried out ethnically based attacks on civilians in North and South Kivu. They include the Raia Mutomboki, the Nyatura, the Mai Mai Kifuafua, and the Democratic Forces for the Liberation of Rwanda (FDLR), a largely Rwandan Hutu armed group, some of whose members participated in the Rwandan genocide in 1994. Some groups have targeted human rights activists who spoke out against their abuses. In September, FDLR fighters abducted a human rights activist in Miriki, North Kivu, detained him in an underground cell for eight days, and accused him of providing information about FDLR abuses to UN peacekeepers.

In Beni territory, North Kivu, the Allied Democratic Forces (ADF), a rebel group led by Ugandan fighters, as well as other militia groups active in the area, kidnapped several hundred Congolese civilians. In Orientale province, fighting between the Patriotic Resistance Force in Ituri (FRPI) and other militia groups and the Congolese army forced more than 80,000 people to abandon their homes.

In Katanga, Mai Mai fighters forcibly recruited hundreds of children into their ranks and killed, raped, and mutilated civilians. Some of these Mai Mai fighters are led by Gédéon Kyungu Mutanga, a warlord who was convicted by a military court in 2009 for crimes against humanity but escaped from prison in September 2011. On August 7, militia fighters in Pweto, Katanga, summarily executed a human rights activist who had denounced abuses by the group.

Few efforts have been made to curb abuses by these armed groups or to investigate, arrest, and prosecute those responsible. Elements of the Congolese army have in some cases collaborated with and provided support to armed groups responsible for serious abuses, including the FDLR and Nyatura.

Government and security forces have used violence, intimidation, threats, arbitrary arrests, and judicial proceedings based on trumped-up charges to silence dissent and prevent political leaders and activists from freely expressing their peaceful opinions or demonstrating.

Eugène Diomi Ndongala, a former member of parliament and minister, has been detained since April. Diomi is the president of the Christian Democrats (Démocratie chrétienne) opposition party and a founding member of the Popular Presidential Majority (Majorité présidentielle populaire)—a political alliance supporting opposition leader Etienne Tshisekedi.

Another member of parliament, Muhindo Nzangi, was sentenced to three years in prison in August. Only two days after he made remarks on a radio program in Goma that were viewed as critical of President Joseph Kabila’s policy in eastern Congo, Nzangi was tried and convicted for endangering internal state security. On August 20, police forcibly disrupted a peaceful sit-in by Nzangi’s supporters outside the North Kivu governor’s office in Goma. They beat several protesters, arrested five, and threatened t0 charge them with rebellion.

Security forces also threatened, beat, or detained journalists and human rights activists. On March 10, police and Republican Guard soldiers beat or threatened four journalists for covering Tshisekedi’s return to Kinshasa from South Africa. In July, a human rights activist was accused of being a spy; soldiers beat him after he conducted a research mission to document M23 abuses.

The vast majority of human rights abuses committed in Congo have gone unpunished. However, there have been some positive developments. On March 18, Bosco Ntaganda turned himself in to the US embassy in Kigali, Rwanda, and was flown to The Hague, where he faces charges of war crimes and crimes against humanity at the ICC. The Congolese government issued arrest warrants for several M23 leaders, and government officials have stated clearly that they will neither provide an amnesty nor integrate into the army those allegedly responsible for war crimes.

In November, the trial began in North Kivu’s military operational court in Goma for 39 soldiers and officers allegedly involved in the mass rape and pillaging in and around Minova a year earlier.

In December 2012, the ICC acquitted and released Mathieu Ngudjolo Chui, who had been charged with crimes against humanity and war crimes allegedly committed in northeastern Congo in 2003. The trial of Ngudjolo’s co-accused, Germain Katanga, continues. Sylvestre Mudacumura, the FDLR’s military commander sought on an arrest warrant from the ICC for war crimes, remained at large at the time of writing.

In February, 11 African countries signed the Peace, Security and Cooperation Framework for the Democratic Republic of Congo and the Region in Addis Ababa, under the auspices of the UN secretary-general. The signatories agreed not to tolerate or provide support of any kind to armed groups; neither to harbor nor provide protection of any kind to anyone accused of war crimes or crimes against humanity, or anyone who is listed under the UN sanctions regime; and to cooperate with regional justice initiatives. The former president of Ireland, Mary Robinson, was appointed UN special envoy for the Great Lakes region to support implementation of the agreement.

In March, the UN Security Council authorized the deployment of an Intervention Brigade. This 3,000-member force within MONUSCO, made up of African troops, is mandated to carry out offensive operations to neutralize armed groups operating in eastern Congo.