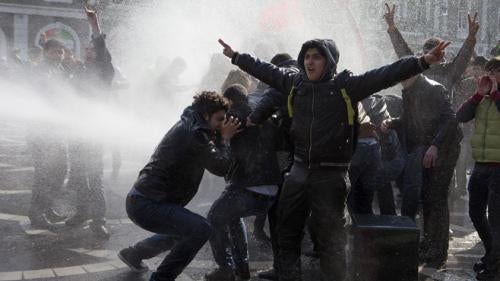 The Azerbaijani government’s poor record on freedom of expression, assembly, and association dramatically deteriorated during the year. The authorities arrested dozens of political activists on bogus charges, imprisoned critical journalists, broke up several peaceful public demonstrations, and adopted legislation that further restricted fundamental freedoms. This crackdown was the backdrop for the October 2013 presidential election, in which incumbent President Ilham Aliyev was re-elected for a third term with 84.5 percent of the vote.

The government continued its urban renewal campaign in the capital Baku, forcibly evicting hundreds of families without adequate compensation. Torture and ill-treatment persists with impunity.

Azerbaijan’s international partners failed to fully realize the potential of their relationships with the government to press for rights improvements.

International observers from the Organization for Security and Co-operation in Europe (OSCE) criticized the presidential election for failing to meet international standards. It assessed counting in 58 percent of polling stations observed as bad or very bad. It also said arrests and intimidation of opposition political activists, a restrictive media environment, and violations of the freedoms of assembly and association marred the pre-election campaign. International observers from the Council of Europe Parliamentary Assembly and the European Parliament were less critical.

In 2013, the authorities used a range of spurious charges—including narcotics and weapons possession, hooliganism, incitement, and even treason—to imprison political activists critical of the government. These activists included several high-ranking opposition political party members such as Ilgar Mammadov, chair of the opposition group REAL, arrested on February 4 and charged with inciting violence; Tofig Yagublu, Musavat party deputy chair, also arrested in February on similar charges; Yadigar Sadigov, an advisor to Musavat, arrested in June on hooliganism charges for allegedly beating up a Nagorno-Karabakh war veteran; and Ilkin Rustemzade, a Free Youth activist, arrested in May on hooliganism charges for alleged involvement in filming a comedy video but later charged with inciting violence.

Seven members of the youth opposition movement NIDA were arrested in March and April on drugs and other charges related to an alleged plan to instigate violence at a peaceful protest. At time of writing their trials were ongoing.

In November, courts sentenced Rashad Ramazanov, a well-known blogger and government critic, and Taleh Bagirov, a religious scholar and activist who sharply criticized the government, to nine and two years, respectively, on bogus drug possession charges.

Dashgin Malikov, a Popular Front Party activist, was arrested in March shortly after he criticized the government on social media and sentenced in July to two-and-a-half years’ imprisonment on drug charges.

In two separate incidents in March and May, security personnel detained, blindfolded, handcuffed, and mistreated Ibrahim Ibrahimli, a leader of an opposition alliance, and Rahim Gaziyev, a former defense minister who had publicly criticized President Aliyev. Both were released after several hours.

In May 2013, the parliament amended a law expanding the definition of slander and insult to specifically include content published on the Internet.

At least five journalists were arrested or convicted in 2013 on spurious charges in apparent retaliation for critical and investigative journalism. In March, Avaz Zeynalli, editor-in-chief of the opposition newspaper Khural, was sentenced to nine years’ imprisonment upon conviction for dubious extortion and tax evasion charges. In April, Araz Guliyev, editor-in-chief of the news siteXeber44.com, was convicted on charges of possessing illegal weapons and organizing public order disturbances and sentenced to eight years’ imprisonment.

In November, Sardar Alibeyli, editor of the pro-opposition newspaper Nota Bene and the PS Nota news portal, was convicted on spurious hooliganism charges and sentenced to four years in prison.

In September, a court sentenced Hilal Mamadov, editor-in-chief of the Tolishi Sado newspaper, arrested in 2012, to five years’ imprisonment for illegal drugs possession, treason, and other charges. Also in September, police arrested Parviz Hashimli, editor of the news website Moderator and a reporter for the opposition daily Bizim Yol. At time of writing, he was awaiting trial on charges of smuggling and illegal weapons possession.

In March, the executive director and editor-in-chief of Khayal TV, a local station, was convicted on several charges, including participating in social unrest, and sentenced to three years’ probation and released.

A smear campaign begun in 2012 against Khadija Ismayilova, a Radio Liberty journalist, continued throughout 2013 in apparent retaliation for her investigations into the business holdings of the president’s family and close associates. Pro-government newspapers and sites published articles and videos personally attacking the journalist and her family. Yafez Hasanov, another Radio Liberty journalist, was the target of blackmail and threats by security services after he refused to stop investigating a 2012 suspicious death in custody.

In February, a government smear campaign targeted Akram Aylisli, a well-known writer, after he published a novel containing critical analysis of Azerbaijan’s modern history and treatment of Armenians. President Aliyev stripped Aylisli of his government stipend and honorary title of “Peoples’ Writer”; his wife and son were also fired from their jobs.

The authorities broke up several peaceful protests, at times violently, and arrested protesters. In November 2012 and May 2013, parliament amended laws increasing by more than hundredfold the fines for involvement in unauthorized protests and increasing from 15 to 60 days the maximum jail sentence for minor public order offenses often used to incarcerate protesters.

On January 26, police rounded up more than 60 people at an unsanctioned, peaceful rally in central Baku, using excessive force during the arrests. Courts sentenced 5 people to up to 15 days of administrative detention and fined 20 people up to 2,500 manat (US$3,200) for resisting police and participating in an unsanctioned protest.

On March 10, police used water cannons and teargas to disperse another peaceful gathering in central Baku. Police arrested dozens and courts convicted over twenty on misdemeanor charges, sentencing five to up to seven days’ detention and fining others up to 600 manat (US$760).

In February 2013, parliament adopted legislative amendments making it impossible for unregistered groups to legally receive grants and donations, a measure that will jeopardize groups that the government refuses to register, often because they engage in work that is controversial or critical of the authorities. Other amendments increased by five-fold fines for nongovernmental organizations that receive funding from a donor without first concluding a grant agreement and registering it with the Ministry of Justice.

The government continues to refuse to register the Human Rights Club, an advocacy group that first filed its registration papers in 2011.

Torture and ill-treatment continue with impunity. In the first nine months of 2013, the Azerbaijan Committee Against Torture, an independent prison monitoring group, received 96 complaints alleging ill-treatment in custody.

The authorities did not effectively investigate credible allegations of beatings, threats, and other abuses in custody made by several arrested political activists. In March 2013, NIDA activist Mahammad Azizov told his lawyer that after he retracted a confession made under duress, Ministry of National Security officials punched him and beat him with clubs. As a result he could not walk for four days and lost hearing in his left ear.

In May, Rashad Ramazanov told his lawyer that he was beaten in a police car on the day of his arrest and during the first three days of questioning.

In 2013, the authorities continued urban renewal in Baku, involving expropriation of many properties—primarily apartments and homes in middle class neighborhoods. Some homeowners continued to face forced eviction in the lead-up to May 2013 opening of central Baku’s Winter Garden, a complex with parks and shops. Hundreds more have been forcibly evicted in previous years to make way for parks, roads, a shopping center, and luxury residential buildings. Most evictees have not received fair compensation based on market values of their properties.

In February 2013, a court convicted Bakhtiyar Mammadov, a human rights lawyer, on apparently politically motivated charges of large-scale extortion and sentenced him to eight years in prison. Mammadov represented several residents who were forcibly evicted from their homes in Baku in 2012.

In May, police briefly detained, slapped, and threatened human rights lawyer Aslan Ismayilov after he publicly claimed that Rashad Ramazanov had been beaten in custody. In September a court stripped Ismayilov of his bar membership.

The European Union, United States, and other international and regional actors and institutions expressed concern about the deterioration in Azerbaijan’s human rights record but did not impose any consequences for it.

In its January 2013 resolution, the Parliamentary Assembly of the Council of Europe (PACE) expressed concern about “the alleged use of fabricated charges against activists and journalists” and called on Azerbaijan to, among other things, release prisoners “whose detention gives rise to justified doubts and legitimate concerns.” The PACE voted down a parallel resolution dedicated exclusively to the issue of political prisoners in Azerbaijan.

In his July 2013 report, Nils Muižnieks, the Council of Europe’s commissioner for human rights, expressed serious concern about “the apparent intensification of … unjustified or selective criminal prosecution of journalists and others who express critical opinions.” Other criticism included restrictions on freedom of expression, assembly, association, and property rights.

In February 2013, EU High Representative Catherine Ashton and Commissioner Štefan Füle jointly urged the authorities to “ensure speedy, fair, transparent, and independent investigation of the charges” against Ilgar Mammadov and Tofig Yagublu. In June, they expressed disappointment regarding legislation expanding the definition of criminal libel.

In its March European Neighborhood Policy progress report, the EU noted that Azerbaijan “addressed only a few of the key recommendations” contained in last year’s report and highlighted serious, ongoing human rights violations related to freedom of expression, association, and assembly.

In April, Azerbaijan underwent the second cycle of the Universal Periodic Review at the United Nations Human Rights Council. The government announced an open invitation to UN human rights experts and accepted all critical recommendations regarding, inter alia, freedom of expression, assembly, and association but continued to deny allegations of rights violations.

OSCE Special Representative on Freedom of the Media Dunja Mijatovic criticized the Azerbaijani authorities’ failure to respect freedom of expression, including the expansion of criminal libel laws and Avaz Zeynalli’s nine-year prison sentence. In July, Azerbaijan successfully pushed to downgrade the OSCE’s presence in Baku from a full-fledged mission to a project coordinator. At time of writing, the OSCE’s new mandate was not made public.

In its annual human rights report published in April, the US Department of State flagged a concern about restrictions on freedom of expression and assembly and politically motivated imprisonment. The US embassy issued several statements of concern on related issues during 2013.