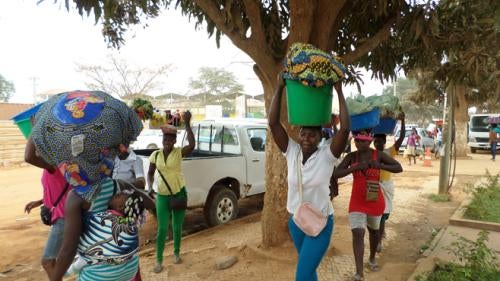 José Eduardo Dos Santos, Angola’s president for the past 34 years, secured another five-year term in the August 2012 elections. Although the polls consolidated the control of the ruling Popular Movement for the Liberation of Angola (MPLA), the authorities intensified repressive measures to restrict freedom of expression, association, and assembly in 2013.

The government has pursued numerous criminal defamation lawsuits against outspoken journalists and activists, while continuing to use police abuse, arbitrary arrests, and intimidation to prevent peaceful anti-government protests, strikes, and other gatherings from taking place. The government also resumed mass forced evictions of informal settlements in 2013 and launched a new initiative to remove street traders in the capital, Luanda. Both measures affect Angola’s poorest communities and have been conducted with brutality.

Freedom of expression is severely restricted in Angola due to limited independent media, self-censorship, and government repression. Only 3 percent of the Angolan population has access to the Internet and social media, which are the main channels for commenting on government policies.

The authorities use criminal defamation laws to silence and intimidate journalists and bloggers. On July 5, bloggers José Gama and Lucas Pedro were charged with “abuse of press freedom” and defamation for articles published on the news website www.club-k.net, which is hosted outside of Angola. Brought by Angola’s attorney general and the criminal investigation police director, the lawsuits are based on articles published between January and May that accused the attorney general of corruption and criminal investigation police officers of torture.

Between March and July, Rafael Marques, an investigative journalist and human rights defender who won the Transparency International Integrity Award in 2013, was charged with defamation in 11 criminal lawsuits. The plaintiffs are high-ranking generals, their business associates, and three private companies that operate in the diamond-rich Lunda Norte province. Marques accused the plaintiffs of involvement in torture, rape, and killings in a book he published in Portugal in 2011. Angola’s Attorney General’s office shelved a complaint filed by Marques against the generals and business associates in 2012, and has failed to investigate the allegations. Marques has regularly experienced threats, harassment, and pervasive surveillance, including apparently targeted hacker attacks on his computer and blog.

On June 11, Domingos da Cruz, journalist of the private weekly Folha 8, was charged with “instigation of collective disobedience” according to a 1978 law on crimes against the security of the state. The law was revoked and replaced by a new law in 2010. The charges were based on an opinion piece that da Cruz published in 2009. A court acquitted him on September 9, arguing the law had been revoked.

Despite constitutional protection for freedom of assembly, since 2011 the authorities have responded to peaceful anti-government protests organized by youth groups and others in Luanda and elsewhere with excessive force, arbitrary arrests, unfair trials, harassment, and intimidation of participants, journalists, and observers. The state-owned media, controlled by the ruling party, present the protests as a threat to peace. Protest organizers and participants were also targeted by surveillance and harassment and occasionally by violent attacks and abduction by security agents in 2013.

On December 22 in 2012, and March 30, May 27, and September 19 in 2013, police used excessive force to disperse peaceful youth protests in Luanda, arbitrarily detaining protesters and in several cases threatening journalists. Most protesters were released the same day without charges. However, 22-year-old Emiliano Catumbela, who was arrested on May 27, was charged with bodily harm, and later charged with attempted assassination of a police commander. He was denied access to his lawyers for several days and said he was beaten and tortured in custody. On June 25, he was released without charges.

On September 12, police arrested 17-year-old Manuel Chivonde Nito Alves, a youth activist and protest organizer, when he collected t-shirts produced for a protest planned for September 19. He was charged with “outrage” against the president based on the t-shirt slogan which called President Dos Santos a “disgusting dictator.” “Outrage” against the president is considered a crime against the security of the state under Angolan law since 2010. He was conditionally released on November 8 to await trial, after being jailed arbitrarily for almost two months.

Three journalists—Rafael Marques, Alexandre Neto, and Coque Mukuta—were arrested on September 20 and severely beaten and threatened in police custody after they interviewed several just-released protesters on the street.

During those protests, youth groups demanded an official explanation on the whereabouts of Isaías Cassule and António Alves Kamulingue. Unknown men abducted Cassule and Kamulingue after they organized a protest of former presidential guards on May 27, 2012. In March 2013, police arrested Alberto Santos, who witnessed Cassule’s abduction. Santos claimed that police tried to pressure him to incriminate opposition activists as responsible for the abductions. He was released on October 1 without charges. On November 9, an Angolan website published details of a leaked confidential report from the Ministry of the Interior that revealed that Kamulingue and Cassule were abducted, tortured, and killed by police and intelligence officials soon after their abduction.

In April, the authorities banned a teacher’s union strike in Lubango, Huila province. Union leaders faced anonymous threats and intimidation. On April 30, police detained two union leaders and charged them with disobedience and defamation of the authorities. A court acquitted them for lack of evidence on May 2.

Arbitrary Detentions in the Enclave of Cabinda

An intermittent separatist insurgency persists in the oil-rich enclave of Cabinda despite a 2006 peace agreement. The government has used security as a pretext to crack down on peaceful dissent. Security forces continue to arbitrarily arrest supporters of the separatist guerilla movement Front for the Liberation of the Enclave of Cabinda (FLEC) and use torture in military custody to force detainees to confess or incriminate others. Such violations of due process rights, as well as harassment of journalists who document such cases and threats against defense lawyers, have undermined the credibility of trials for alleged national security crimes in Cabinda.

Between August 10 and September 12 2013, military and intelligence officials arrested, mistreated, in several cases tortured, and jailed at least 20 men in Cabinda, including an adviser to the deputy governor of Cabinda. They were charged with armed rebellion and remain in pretrial detention.

Nine men of Congolese origin and Angolan, Belgian and French nationalities, alleged to be former members of the defunct Armed Forces of Zaire (FAZ) were arrested on November 22, 2012, beaten and tortured by military and border guards while in incommunicado detention. In May, they were charged with armed rebellion against the government of the Democratic Republic of the Congo, illegal entry and stay in Angola. As of November 2012, the men remained in pretrial detention.

Since January 2013, Arão Tempo, a lawyer and local representative of the Angolan Bar, has received repeated death threats from intelligence officials warning him to stop defending the 20 men held in Cabinda and the 9 alleged FAZ members.

In October 2012, the governor of Luanda ordered urgent measures to reduce street trade in the capital. Since then, the authorities have scaled up efforts to remove street vendors from the streets of Luanda.

During these operations, police and government inspectors have routinely mistreated street vendors, including pregnant women and women with children, by seizing their goods, extorting bribes, threatened them with imprisonment, and in some cases arresting them. The authorities have also intimidated, harassed, and arbitrarily arrested journalists, activists, and witnesses who seek to document the brutality of the operations.

The majority of Angola’s urban population lives in informal settlements without legal protection. Angola's laws neither adequately protect people from forced eviction nor enshrine the right to adequate housing. In 2013, the government continued to carry out mass forced evictions in areas that it claimed were reserved for public use. The operations occurred without adequate prior notice and security forces used excessive force.

In the first days of February, security forces forcibly evicted an estimated 5,000 residents from an informal settlement in the peripheral Cacuaco municipality in Luanda. Following the evictions, security forces arbitrarily arrested dozens of residents, at least 40 of whom were charged with illegal land occupation and disobedience, and were convicted and given prison sentences.

On October 7, International Habitat Day, the authorities prevented a protest against forced evictions in Luanda organized by SOS Habitat, a nongovernmental organization.

Angola is the second largest economy in the Southern African Development Community (SADC), and an increasingly influential power both in the sub-region and the continent due to its economic and military clout. Angola’s oil wealth and soaring economic growth continue to attract business interests from all over the world, and few of its partners prioritize the governance and human rights concerns in their cooperation agenda.

Angola’s periodic report to the UN Human Rights Committee, the treaty monitoring body for the International Covenant on Civil and Political Rights, was considered in 2013. The Committee urged the government to end impunity and investigate killings, torture, ill-treatment, and enforced disappearances by the security forces, among other recommendations.

In early April, the UN High Commissioner for Human Rights, Navi Pillay, visited Angola at the invitation of the government. During her visit, Pillay raised a wide array of human rights concerns, including restrictions on freedom of expression and of the media, the excessive use of force to repress protests, mistreatment and sexual violence against irregular migrants, forced evictions, and violations of economic and social rights. Pillay’s visit was a rare spotlight on Angola’s human rights record, which is mostly ignored by Angola’s regional and international partners in favor of strengthening trade links.