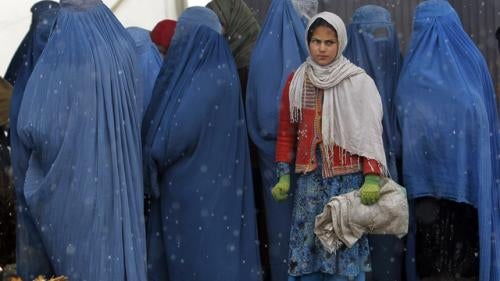 Preparations for the end-2014 withdrawal of international combat troops continued in 2013, with international troops largely departed, sequestered in bases, and focused on the logistics of shipping military equipment out of the country. The Afghan army and police stepped forward to lead the fight against the Taliban and other insurgents, with mixed results.

The ability of Afghan security forces to hold government-held territory, let alone retake insurgent-controlled areas, is unclear, and security concerns for much of the population remain high. The United Nations recorded a 23 percent rise in civilian casualties for the first six months of 2013 compared to 2012, most caused by insurgents, with the Taliban explicitly targeting civilians they see as supporting the government. The security concerns are reflected in the fact that almost half of the 7,000 polling centers planned for the 2014 presidential election face serious threats.

There was continued instability and declining respect for human rights in the country over the past year. This was reflected in attacks on women’s rights, growing internal displacement and migration, and weakened efficacy of the Afghanistan Independent Human Rights Commission (AIHRC). Impunity for abuses was the norm for government security forces and other armed groups. These problems raised concerns about the fairness of the upcoming presidential election.

With international interest in Afghanistan rapidly waning, opponents of women’s rights seized the opportunity to begin rolling back the progress made since the end of Taliban rule. A May parliamentary debate on the groundbreaking Law on the Elimination of Violence Against Women (EVAW Law), passed by presidential decree in 2009, was halted after 15 minutes after numerous lawmakers argued for the law’s repeal and spoke out against legal protections for women and girls. The law remains valid, but enforcement is weak. The EVAW debate heralded, and perhaps triggered, subsequent attacks and setbacks within the government during the year, including:

A string of physical assaults in 2013 against high-profile women highlighted the danger to activists and women in public life. These included:

Overall declining international interest in Afghanistan contributed to mounting fears among Afghans for the country’s future.

Preparations for the April 2014 presidential election were plagued with difficulties, with voter registration off to a slow start; delays in the adoption of necessary legislation; controversy over the membership of the Independent Election Commission and the Electoral Complaints Commission; low rates of female voter registration; and concerns about the ability of Afghan security forces to provide adequate security on election day.

Candidacy by individuals implicated in serious human rights abuses raised questions about the efficacy of vetting processes, and increased cynicism among potential voters.

Deteriorating security and growing fears for the future contributed to an increasing number of Afghans fleeing their homes for other parts of the country, other countries, or choosing not to return home from overseas. The United Nations High Commissioner for Refugees  (UNHCR) documented an increase of over 106,000 in the number of internally displaced people from January through June 2013, bringing the total to over 583,000. The main causes of displacement were armed conflict and diminished security.

The number of Afghans seeking safety outside the country also grew, with some making dangerous journeys from Afghanistan through the mountains into Iran toward Europe or by boat to Australia. The number of refugees returning to Afghanistan from neighboring countries has fallen in recent years, according to the UNHCR.

Afghans arriving in other countries often faced increasing hostility, including draconian new policies in Australia diverting asylum seekers to third countries and governmental proposals in European countries, including the United Kingdom and Norway, to deport unaccompanied Afghan children back to Afghanistan.

In recent years, the government has largely denied documentation by the UN and the Afghanistan Independent Human Rights Commission that Afghan police and the intelligence service tortured detainees. However, on February 10, 2013, a government investigation that President Hamid Karzai ordered into allegations of ill-treatment acknowledged widespread torture. Karzai followed up on February 16 with a decree ordering anti-torture measures, including prosecuting officials responsible for torture.

In September, Karzai issued an order creating a new government committee to investigate prison conditions. However, at time of writing there was no indication that torture prosecutions had advanced, or that Karzai’s actions had substantially reduced torture and other ill-treatment in detention.

Abuses by the Afghan Local Police (ALP)—a network of local defense forces established largely by the US military in cooperation with the Afghan government—continued to be a serious problem. Designed to operate in areas with limited Afghan police or army presence, the ALP has been plagued from its beginnings in 2010 by structural problems that include poor vetting of recruits, weak command and control structures, and lack of accountability mechanisms. These problems persist, as do allegations of ALP involvement in murder, rape, theft, extortion, and child recruitment.

Although praised globally as an effective human rights body, the AIHRC—the independent government agency—was largely in limbo from December 2011 until June 2013 due to multiple commissioner vacancies that President Karzai did not fill for a year-and-a-half.

However, after donors set a deadline for filling these positions as part of the follow-up to the 2012 Tokyo Conference, at which donors pledged US$16 billion in development aid in return for commitments by the Afghan government including support for human rights, Karzai in June 2013 filled all vacant seats, albeit without the consultation with civil society that the Paris Principles on national human rights commissions requires. Several of the five new appointees had little or no experience in human rights or had expressed overt hostility to the concept of universal human rights. Abdul Rahman Hotak, a former member of the Taliban government, after his appointment publicly criticized the EVAW Law. In June, the UN high commissioner for human rights took the unusual step of raising “serious concerns” about the appointments and called for the Afghan government “to reconsider the recent appointments and re-open the selection process.”

One of the AIHRC’s key achievements in recent years was the completion of an 800-page report that maps war crimes and crimes against humanity in Afghanistan since the communist era. Completed in December 2011, it will provide a foundation for future steps to prosecute those implicated in past abuses. However, at time of writing there was no planned release date for the report: President Karzai has blocked the release with the encouragement of international donors including the US and UK, which have argued that releasing the report could be destabilizing in the current tense security environment since it likely implicates a number of powerful figures.

The rights to freedom of expression and association of media and political parties, hailed as one of Afghanistan’s clear human rights successes since 2001, came increasingly under threat in 2013.

Two credible Afghan media organizations, Nai and the Afghanistan Journalists’ Safety Committee, compiled statistics demonstrating a rise in the risks faced by journalists during 2013 as compared to 2012. Both groups documented around 40 attacks on journalists in the first six months of 2013, compared to around 20 attacks in the same period in 2012. The attacks included threats, armed assaults, and kidnappings. Of particular concern was the growing number of cases where the attacks implicated government officials, including members of the Afghan security forces. There were also cases in which journalists who were attacked sought help from the security forces but were denied assistance or subjected to abuse by the security forces.

International fatigue with Afghanistan among most countries that have contributed troops or significant amounts of aid post-2001—particularly the US, which has had the largest military and aid involvement—negatively impacted human rights in 2013 by reducing political pressure on the government to respect human rights, especially those of women.

While many countries are pledging continued aid to Afghanistan, political engagement is waning sharply and the US is scaling back most forms of assistance. A sense that involvement in Afghanistan is ending is palpable in discussions with diplomats, and cuts in international aid are already leading to the closure of some schools and health clinics.

The end-2014 deadline for the withdrawal of international military troops will further hasten disengagement. Disagreements between the Afghan and US governments, including over the opening of a Taliban office in Doha, Qatar, delayed the pending Bilateral Security Agreement (BSA), expected to set out US support for Afghanistan’s security post-2014. Similar agreements with other key foreign partners were on hold pending resolution of the BSA. These delays have increased the sense of uncertainty and instability in Afghanistan.

In April 2013, President Karzai admitted that the CIA had been dropping off bags of cash, totaling tens of millions of dollars, at his office for more than a decade. The acknowledgement led the ranking member of the US Senate Foreign Relations Committee to put a temporary hold on certain assistance programs while he sought more information.

Afghanistan remained under preliminary analysis by the prosecutor of the International Criminal Court, who since 2007 has been looking into allegations of serious international crimes, including torture, recruitment of child soldiers, attacks on humanitarian objects and the UN, and attacks on schools.