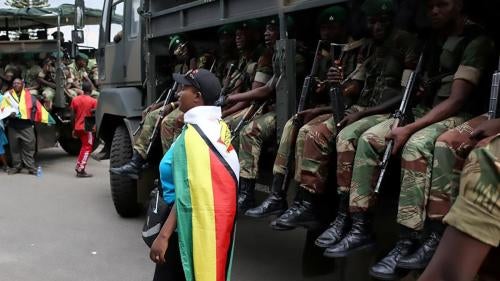 In November 2017, President Robert Mugabe was ousted in a military coup and was replaced by his former deputy, Emmerson Mnangagwa, who has his own long record of rights violations. During the military takeover between November 14 and 24, the army arrested and detained a number of Mugabe’s associates without providing information about the arrest, or places and conditions of detention.

In his inaugural speech on November 24, Mnangagwa confirmed that elections will take place as scheduled, by August 2018, but did not address the issue of meaningful security sector, media, and electoral reforms to ensure credible, free, and fair elections. There was no indication that the Mnangagwa administration intended to ensure the independence and enhance the professionalism of the Zimbabwe Electoral Commission (ZEC), or update the voters’ roll under ZEC’s exclusive control.

Prior to his ouster, Mugabe had presided over intensified repression of peaceful protests against human rights violations and an economy on the brink of collapse. His administration disregarded the rights provisions in the country’s 2013 constitution, and implemented no meaningful human rights reforms. In July, the parliament passed a constitutional amendment granting the president powers to directly appoint senior members of the judiciary, further eroding the independence of the judiciary. Police abuse continued, using excessive force to crush dissent. Human rights defenders, civil society activists, journalists, and government opponents were harassed, threatened or faced arbitrary arrest by the police. Widespread impunity for abuses by the police and state security agents remained.

In 2017, several journalists and activists were subject to arbitrary arrest, harassment, and intimidation while participating in protests or reporting on demonstrations.

On September 24, police arrested and charged rights activist Pastor Evan Mawarire with “subverting a constitutional government,” which carries a maximum 20-year prison sentence. Mawarire is a prominent critic of the government and leader of the #ThisFlag campaign, which organizes protests against the government for failing to address Zimbabwe’s rights problems and failing economy. Mawarire was released after three days. The police previously arrested Mawarire in February on the same charge of subverting a constitutional government. A court had cleared him of similar charges in July 2016.

On June 22, police in Rusape, 170 kilometers east of Harare, arrested and briefly detained freelance journalists Garikai Chaunza and Frank Chikowore, who were investigating forced evictions at Lesbury farm in Rusape. The journalists said police ordered them to delete all pictures they took at the farm before being released. In the same month, Harare police summoned and interrogated NewsDay editor Wisdom Mdzungairi and reporter Everson Mushava over a story they published about alleged ZANU-PF party infighting.

State media remains partisan in favor of the ruling ZANU-PF party while limiting coverage of opposition political parties. The government has not repealed or amended the Access to Information and Protection of Privacy Act (AIPPA), the Public Order and Security Act (POSA), and other laws that severely restrict basic rights and infringe on freedom of expression.

Two years after Zimbabwe’s Constitutional Court declared child marriage unconstitutional and set 18 as the minimum marriage age, the government has yet to amend or repeal all existing marriage laws that still allow child marriage. It also has not put structures in place to implement the court decision and ensure that girls under 18 are not forced into marriage.

A January 2017 Human Rights Watch report found that widows are routinely evicted from their marital homes and their property confiscated by in-laws with little recourse to the formal justice system. Many of the victims struggled to claim rights for reasons unique to their status as widows. Few women formally own the property held during their marriage. As a result, they were unable to keep jointly held property upon the death of their husband. They are required to prove they were in fact married, which can pose great challenges, due to lack of access to the courts and the high cost of obtaining the necessary documents to ward off in-laws’ intent on property grabbing. The government has yet to raise awareness, review inheritance and marriage laws, and improve access to justice for women.

Section 73 of the Criminal Law Act punishes consensual same-sex conduct between men with up to one year in prison or a fine or both.

Authorities continued to ignore human rights provisions in the country’s 2013 constitution. The government did not enact new laws or amend existing legislation to bring them in line with the constitution and Zimbabwe’s international and regional human rights obligations.

In July, the parliament amended the constitution to give the president absolute powers to appoint the chief justice (the head of the judiciary), the deputy chief justice, and the judge president of the high court. Zimbabwe’s ruling ZANU-PF party used its parliamentary majority to approve the amendment despite the opposition’s objections.

Then-president Mugabe signed the retrogressive constitutional amendment into law, further eroding the rule of law through executive control over the judiciary. The amendment also undermines Zimbabwe’s international human rights legal obligations to respect judicial independence under the African Charter on Human and Peoples’ Rights (ACHPR) and the International Covenant on Civil and Political Rights (ICCPR).

On March 17, about 100 anti-riot police demolished homes at Arnolds Farm—a farm linked to former president Mugabe’s family—forcing residents onto trucks and dumping them by the roadside 40 kilometers away. On March 24, the farm residents obtained a High Court order to stop the evictions and bar police from harassing them, demolishing their homes or attempting to evict them without a valid court order. The anti-riot police, claiming to be acting on behalf of former First Lady Grace Mugabe, ignored the court order, and on several occasions ordered some 200 families to leave the farm. The anti-riot police then demolished homes, destroyed property, and beat up those who resisted.

Following the November 2017 military coup, the leadership of the Southern African Development Community (SADC) called on all stakeholders in Zimbabwe to peacefully resolve the nation’s political challenges. When Mugabe resigned under military pressure, SADC leaders welcomed his decision, pledging to support the August 2018 elections. The African Union (AU) initially condemned the military takeover, but later welcomed Mugabe’s resignation. The AU said it recognized that the Zimbabwean people have expressed their will to have a peaceful transfer of power, and Mugabe’s decision to resign paves the way for a transition process, owned and led by the people of Zimbabwe.

The AU and SADC have also not yet spoken publicly on the need for Zimbabwe’s new government to establish a roadmap to democratic elections and to ensure the political neutrality and non-interference of the security forces in civilian and electoral affairs. Zimbabwe is party to the SADC Principles and Guidelines Governing Democratic Elections, established to promote regular free and fair, transparent, credible and peaceful democratic elections.

Boris Johnson, foreign secretary of the United Kingdom, Zimbabwe’s former colonial ruler, expressed hope that a “stable and successful Zimbabwe” would emerge from the ouster of Mugabe.

The United Nations, United States, and UK have provided support for social services such as health, water, sanitation, and education projects. The US and the UK have had little influence with the government of Zimbabwe during Mugabe’s 37 years as leader. While the UN may be more influential, UN officials have rarely made public comments critical of human rights abuses by the Zimbabwean government.

Following the November military takeover, two UN independent human rights experts, Idriss Jazairy, special rapporteur on the negative impact of the unilateral coercive measures on the enjoyment of human rights, and Alfred de Zayas, independent expert on the promotion of a democratic and equitable international order, welcomed ‘the avoidance of bloodshed’ during the change of power, and called on the international community to respond by lifting sanctions.