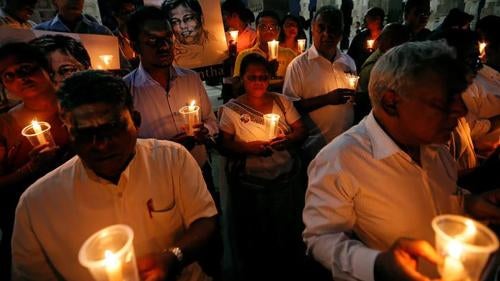 The general openness for media and civil society groups that emerged after the electoral defeat of the Mahinda Rajapaksa government in 2015 continued in 2017 under the administration of President Maithripala Sirisena. However, action stalled in 2017 on Sri Lanka’s October 2015 pledges to the United Nations Human Rights Council (UNHRC) to address accountability and political reconciliation emerging from the country’s 26-year civil war with the secessionist Liberation Tigers of Tamil Eelam (LTTE).

Despite a presidential pledge to release names of people in government custody, particularly those forcibly disappeared since the war’s final months in 2009, the list was not produced. The government enacted a law to give effect to the International Convention for the Protection of All Persons from Enforced Disappearance, but made clear that the law would not be retroactive.

Religious minorities remained at risk. In June 2017, then Justice Minister Wijeyadasa Rajapakshe publicly threatened a lawyer who criticized the government’s failure to protect minorities. In September, authorities took 31 Rohingya Muslim refugees into protective custody following threats by Buddhist extremists. There were further flares of violence in Galle and Vavuniya in November between Muslim and other communities, with allegations of mobs attacking Muslim homes and businesses.

Truth, Reconciliation, and Accountability for Past Abuses

In October 2015, the UNHRC adopted a consensus resolution in which Sri Lanka pledged to undertake several human rights reforms, including transitional justice demands arising from the civil war, and to establish four transitional justice mechanisms, including a judicial mechanism with “participation of international judges, prosecutors, lawyers and investigators” with an independent investigative and prosecutorial body.

Civil society leaders, appointed by the government, conducted nationwide consultations in 2016, and handed a comprehensive report to the government in January 2017. It contained strong recommendations, including for a hybrid justice mechanism, acknowledging the need for independent international participation to ensure justice for victims of war crimes and other grave human rights abuses by all sides. The report included the need for justice for all victims of the long conflict, regardless of ethnicity, religion, or political persuasion.

Neither the president nor the prime minister received the report publicly and it has since languished, with scant government attention. The government’s response to the report since January 2017 has also been disappointing. Senior cabinet ministers explictly rejected the recommendation that foreign nationals particpate in the special court. Both the president and the prime minister publicly reiterated the point, and further emphasized that the government would not allow “war heroes” to be prosecuted.

One of the four pillars of the 2015 resolution was to create an Office of Missing Persons (OMP). Although the government enacted a law in August 2016, efforts operationalize it remained stalled until September 2017. The OMP had yet to be formally set up at time of writing, and as of November, commissioners to the OMP had not been appointed.

Families of the disappeared said that the OMP was decided without proper consultation with affected groups, particularly as it was passed before the national consultation was finished. The act therefore does not address some of its central recommendations, including the need for psychosocial support, victim and witness protection measures, a minority rights commision, and symbolic gestures to allow public grieving, such as commemorating their dead.

The government failed to properly implement promised security sector reforms to ensure human rights protections. It failed to repeal or revise the draconian Prevention of Terrorism Act (PTA) and reform the Witness and Victim Protection Law. At least two separate drafts of the PTA were floated throughout the year, both of which could facilitate serious human rights abuses. Troubling provisions included overly broad definitions of terrorist offenses to possibly include peaceful political protesters. The government received feedback on the drafts from various UN offices specializing in counterterrorism, but at time of writing the drafts continued to fail international standards.

With a few exceptions, particularly in cases that generated considerable publicity, Sri Lankan police were not held accountable for routine torture and ill-treatment in custody.

In April-May 2016, the UN special rapporteur on torture visited Sri Lanka. The report, presented to the March 2017 Human Rights Council session expressed “extreme alarm” at the failure to investigate credible allegations of torture, and corroborated accounts of ongoing torture, including sexual abuse.

The UN special rapporteur on counterterrorism and human rights, following a visit in July 2017, similarly reported that use of torture by Sri Lankan security forces is routine, and continues despite government claims of security sector reforms.

The National Human Rights Commission, although limited in resources, actively visited and monitored prisons and places of detention throughout 2017; despite occasional difficulties, the commission experienced no obstacles securing access to detainees.

The government issued an interim report in September 2017, but it did not properly reflect recommendations from a 2016 national consultation. Nonetheless, its publication was welcomed by many political parties keen to see progress on constitutional reforms. However, the efforts stalled and parliament had yet to debate the report at time of writing. Nor had the government issued timelines for when a final report on constitutional reform could be expected.

The government took some steps to protect the rights of more than 1 million migrant workers in the Middle East and other parts of Asia, but many continued to face long working hours with little rest, delayed or unpaid wages, confinement in the workplace, and verbal, physical, and sexual abuse.

In June, the government announced the appointment of a committee to study strategies to reduce the number of domestic workers abroad and to end the kafala sponsorship system that operates in many Middle Eastern countries, restricting employment and transfer opportunities for migrant workers.

The government failed to make progress during the year toward implementing a 2016 plan forwarded by the Ministry of Health to establish a clear procedure for transgender people to change their identity documents. State and non-state discrimination against the lesbian, gay, bisexual, transgender and intersex (LGBTI) population persisted. Sections 365 and 365A of the penal code prohibit “carnal knowledge against the order of nature” and “gross indecency,” commonly understood in Sri Lanka to criminalize same-sex relations between consenting adults. At a UN review in November, Sri Lanka rejected recommendations to repeal sections 365 and 365A.

Sri Lanka continued its engagement with the international community. UN special mandate holders made several visits to the country during the year. Sri Lanka appeared before the UN Universal Periodic Review Working Group in November.

The Sri Lankan government, in responding to the CEDAW in February, seemed unable or unwilling to answer questions of concern that committee members put to the government delegation.

The United Nations expressed an interest in vetting Sri Lankan forces before sending them abroad for peacekeeping duties in light of the numerous wartime abuses attributed to the armed forces.