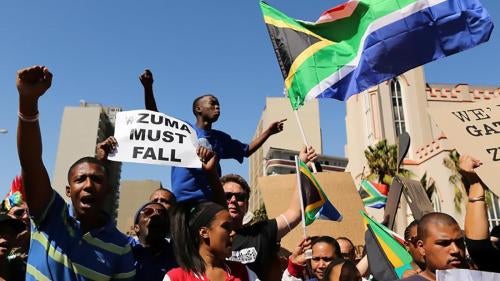 On October 13, the Supreme Court of Appeal (SCA) upheld a High Court decision to prosecute President Jacob Zuma on 18 charges and 783 counts of fraud, racketeering, and money laundering. Zuma and the National Prosecuting Authority (NPA) had asked the SCA to overturn the High Court decision, which found that the NPA’s 2009 decision to drop corruption charges against Zuma was “irrational.” Zuma called the SCA decision disappointing, and the NPA, due to procedural delay, has yet to reinstate the fraud and corruption charges against him at time of writing.

The government failed to realize the right to education for many children and young adults with disabilities. The absence of a national strategy to combat the high rate of violence against women, and the continued under-reporting of rape, remained a concern.  In 2017, the government continued to send mixed signals on its support for the International Criminal Court (ICC), following a decision by domestic courts that the government’s notice of withdrawal from the court was unconstitutional and invalid.

At the end of the year, the government indicated it would pursue the withdrawal through a future bill to be presented to parliament.

In August, South Africa took over as chairperson of the Southern African Development Community (SADC) for a year, but during 2017 did not use the leadership role to promote and support human rights improvements in the region.

Despite the government’s international and domestic obligations, many children with disabilities do not have equal access to primary or secondary education, and face multiple forms of discrimination and barriers when they do access schools. They are turned away from mainstream schools, denied access to inclusive education, and referred instead to special schools by school officials or medical staff simply because they have a disability. The referrals system needlessly forces children to wait up to four years at care centers or at home for placement in a special school.

However, the government continued to implement the Screening, Identification, Assessment, and Support (SIAS) policy designed to ensure that children with disabilities are provided full support when accessing education. The majority of the government’s limited budget for students with disabilities continued to be allocated to special schools rather than to inclusive education.

In October 2017, an arbitration process, presided over by retired deputy chief justice Dikgang Moseneke, began between the state and families of former hospital patients who died following the Gauteng provincial government shut down of the Life Esidimeni psychiatric hospice complex in Johannesburg, where more than 2,000 people with psychosocial disabilities lived.

Between March 2016 and October 2017, 141 former patients of the hospice died after about 1,700 patients were transferred to smaller institutions while others were discharged, sometimes without their families being notified. The Gauteng government, which terminated its contract with Life Esidimeni in October 2015 citing financial reasons, had a responsibility to ensure the hospice had adequate resources to support the patients.

Despite recurring waves of xenophobic attacks on businesses and the homes of refugees, asylum-seekers, and migrants, authorities appeared reluctant to even publicly acknowledge xenophobia and take decisive action to combat it, including ensuring proper police investigations. Virtually no one has been convicted over past outbreaks of xenophobic violence, including for the Durban violence of April 2015 that displaced thousands of foreign nationals, or the 2008 attacks, which resulted in the deaths of more than 60 people across the country.

In February, a group calling itself “The Mamelodi Concerned Residents” marched in Pretoria to protest against African immigrants in South Africa, blaming them for crime and stealing jobs meant for South Africans. The march triggered a wave of violent clashes and looting of shops owned by foreign nationals. In December 2016, Johannesburg Mayor Herman Mashaba made reckless public statements blaming illegal immigrants for crime and calling on them to leave the city.

In July 2017, the SAHRC condemned Deputy Minister of Police Bongani Mkongi’s July 14, 2017 statement saying of Johannesburg: “How can a city in South Africa be 80 percent foreign national? That is dangerous. South Africans have surrendered their own city to the foreigners.” The commission said the statement was inaccurate and could fuel xenophobia. The government took no action against Mkongi.

At time of writing, the government had yet to finalize the draft national action plan to combat racism, racial discrimination, xenophobia and related intolerance, or provide a mechanism for justice and accountability for xenophobic crimes.

Violence against women, including rape and domestic violence, remain widespread and underreported. According to research findings published in August 2017 bythe Centre for the Study of Violence and Reconciliation and Oxfam South Africa, one in five women older than 18 has experienced physical violence, and three women die at the hands of their partner every day. The government has yet to introduce a national strategy to combat violence against women.

In September, the Western Cape High Court ruled that individuals have the right to amend their gender description even if they were married as heterosexuals. Three women and their spouses had taken the Department of Home Affairs to court after it refused to change their gender description. Local rights group, the Legal Resources Centre (LRC), filed the case on behalf a client who had their marriage deleted from the National Population Register‚ and two others whom the department advised to get a divorce in order to give effect to their gender rights.

South Africa has a progressive constitution that prohibits discrimination on the basis of sexual orientation and protects the human rights of lesbian, gay, bisexual, and transgender (LGBT) people. The Department of Justice and Constitutional Development has taken significant steps to improve coordination between government and civil society in combatting violence (including rape and murder) against lesbians and transgender men.

In a historic victory for transgender students, in May 2017 the Seshego Magistrate’s Court in Limpopo ordered the Limpopo Department of Education to pay R60 000 (approximately US$4,500) in personal compensation for discrimination to Nare Mphela, a transgender woman from Ga-Matlala village. The case was lodged by the SAHRC in November 2016 under the Promotion of Equality and Prevention of Unfair Discrimination Act (The Equality Act).

In 2017, South Africa missed key opportunities to consistently place human rights at the center of its foreign policy. In August, the country took over the SADC for a year, but has refrained from criticizing Zimbabwe’s poor human rights situation.

Although South Africa’s governing party, the African National Congress, called for Swaziland to be referred to SADC for abuse of human rights and suppression of dissent in July, the government did not use the SADC chair to press for human rights respect in Swaziland. In October, President Zuma, during a visit to the Democratic Republic of Congo, did not publicly raise human rights concerns with President Joseph Kabila.

In his address to the United Nations General Assembly in September, President Zuma called on the UN to support the African Union (AU) to resolve conflicts on the continent through promoting "African solutions to African problems and challenges." He said South Africa stands ready to work with the UN to promote peace, human rights and sustainable development.

In February, South Africa’s North Gauteng High Court ruled that the government’s attempt to withdraw from the ICC was unconstitutional and invalid, as the government issued its withdrawal notice without consulting parliament. The court ordered President Zuma and the Ministries of Justice and Foreign Affairs to revoke the notice of withdrawal. The ICC debacle further dented South Africa’s international image as a champion of human rights and international justice. The government proposed legislation to parliament on withdrawal, but removed it from consideration in March. In December, the government indicated at the ICC’s Assembly of States Parties in New York that it would indeed pursue its intent to withdraw.

In July, the Pre-Trial Chamber of the ICC ruled that South Africa violated its legal obligations to the court in failing to arrest Sudanese President Omar al-Bashir in June 2015, when he attended the AU Summit in the country. Al-Bashir is the subject of two ICC arrest warrants on charges of genocide, crimes against humanity, and war crimes allegedly committed in Darfur. South African courts had previously confirmed the government had a duty to arrest al-Bashir. The chairperson of the ANC International Relations subcommittee, Edna Molewa, in an op-ed published a week later, said the domestic court rulings on al-Bashir’s arrest vindicated the ANC’s initial decision to withdraw from the ICC.

In May 2017, UN member states recommended the implementation of measures to ensure inclusive education for all children with disabilities during South Africa’s Universal Periodic Review before the UN Human Rights Council.

Some of South Africa’s votes at the UN were inconsistent the country’s stated human rights principles, including the vote against a resolution at the Human Rights Council to renew the mandate of the Commission of Inquiry on Burundi.