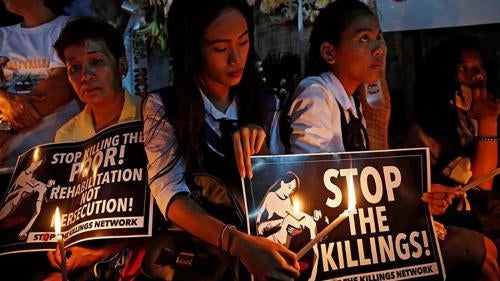 President Rodrigo Duterte has plunged the Philippines into its worst human rights crisis since the dictatorship of Ferdinand Marcos in the 1970s and 1980s. His “war on drugs,” launched after he took office in June 2016, has claimed an estimated 12,000 lives of primarily poor urban dwellers, including children.

Duterte has vowed to continue the abusive anti-drug campaign until his term ends in 2022. Throughout 2017 and the latter part of 2016, he engaged in harassment and intimidation of individuals and agencies tasked with accountability—including United Nations officials.

Duterte’s most prominent critic, Senator Leila de Lima, remained in detention on politically motivated drug charges. Pro-Duterte lawmakers in 2017 sought to eliminate budgetary funding for the official Commission on Human Rights as apparent retaliation for its efforts to probe the anti-drug campaign. In the face of mounting international criticism, the Duterte government has adopted a tactic of denying as “alternative facts” well-substantiated reports by human rights and media organizations of high death tolls linked to the “drug war.”

Violation of children’s rights, attacks on journalists and media, and government policy failures contributing to the country’s worsening HIV epidemic persisted in 2017.

The Duterte administration’s “war on drugs” has resulted in the deaths of thousands of mostly poor Filipinos. Philippine Drug Enforcement Agency (PDEA) data indicates that police operations resulted in the deaths of 3,906 suspected drug users and dealers from July 1, 2016, to September 26, 2017. But unidentified gunmen have killed thousands more, bringing the total death toll to more than 12,000, according to credible media reports.

The government has frustrated efforts by media and other independent observers to maintain a verifiable and transparent tally of such deaths by issuing contradictory data. In August, the official Commission on Human Rights stated that the “[a]ctual number [of drug war killings] is certainly higher than what is suggested” by police.

A Human Rights Watch investigation found that the Philippine National Police and its agents have repeatedly carried out extrajudicial killings of drug suspects, and then falsely claimed self-defense. Police have planted guns, spent ammunition, and drug packets on victims’ bodies to implicate them in drug activities. Masked gunmen taking part in killings appeared to be working closely with police, casting doubt on government claims that most killings have been committed by vigilantes or rival drug gangs.

No one has been meaningfully investigated, let alone prosecuted, for any of the “drug war” killings. Instead, Duterte has pledged to pardon policemen implicated in killings. In October, responding to a public outcry against killings notably committed against children, Duterte removed police from anti-drug operations, assigning the PDEA as the main agency to carry out the drug war.

However, journalists who closely cover the anti-drug campaign say that although the killings by uniformed police personnel have declined since that time, summary killings by “vigilantes” have continued uninterrupted. On November 22, Duterte warned of an imminent lifting of the suspension of police anti-drug operations, raising the likelihood of more extrajudicial executions by police and their agents.

The Duterte administration has widened its “war on drugs” to include critics and political foes. Since February 2017, Senator Leila de Lima has been behind bars on politically motivated drug charges filed against her in apparent retaliation for leading a Senate inquiry into the drug war killings.

In August, Duterte encouraged police attacks against human rights groups and advocates, instructing police, “If they are obstructing justice, you shoot them.”

Duterte has publicly condemned the Commission on Human Rights and threatened to abolish it. He also repeatedly subjected United Nations Special Rapporteur on Extrajudicial Killings Agnes Callamard to profanity-laced ridicule for her repeated efforts to secure an official visit to the Philippines. In August, he responded to Callamard’s criticism of police extrajudicial killings of children by calling her a “son of a bitch” and a “fool.”

In July, a Philippine children’s rights group published data indicating that police have killed 56 children since the start of the “drug war.” Most were killed while in the company of adults who were the apparent target of the shooting. Both Duterte and Justice Secretary Vitaliano Aguirre II have dismissed those child killings as “collateral damage.”

In February, public opposition prompted Congress to reject a bill that would have lowered the age of criminal responsibility to nine from the current 15 years.

In August, the government approved mandatory drug testing for high school and college students and applicants. This will effectively allow the police to extend their abusive anti-drug operations to high schools and university campuses.

In March, unidentified gunmen killed newspaper columnist Joaquin Briones in the Masbate province town of Milagros. In August, an unidentified gunman killed radio journalists Rudy Alicaway and Leo Diaz in separate incidents on the southern island of Mindanao. The National Union of Journalists estimates that 177 Filipino reporters and media workers have been killed since 1986.

Duterte has publicly vilified media outlets whose reporters have exposed police culpability in extrajudicial killings. In April, he threatened to block the renewal of the broadcasting franchise of ABS-CBN network. In July, Duterte publicly threatened the Philippine Daily Inquirer with tax evasion charges and falsely accused the media platform Rappler of being US-owned in an apparent effort to undermine its credibility.

Journalists who report critically on the Duterte administration are also subjected to harassment and threats online. In December 2016, the Foreign Correspondents Association of the Philippines issued a statement denouncing such attacks.

The Philippines is facing the fastest-growing epidemic of HIV in the Asia-Pacific region. According to the Joint United Nations Programme on HIV/AIDS (UNAIDS), the number of new HIV cases jumped from 4,300 to 10,000 between 2010 and 2016. Most new infections—up to 83 percent—are among men and transgender women who have sex with men. In August, the government declared the situation a “national emergency.”

Despite recognition of the problem, the government is responsible for a legal and policy environment hostile to evidence-based policies and interventions have proven to help prevent HIV transmission, including the use of condoms and comprehensive sexuality education targeting the young.

Human Rights Watch research shows that many sexually active young Filipinos have little or no knowledge about the role of condoms in preventing sexually transmitted diseases because the government fails to provide adequate school programs on safe-sex practices. A bill amending the country’s main law on HIV/AIDS to boost the government’s response to the crisis remained pending in Congress at the time of writing.

Students across the Philippines experience bullying and discrimination in school because of their sexual orientation and gender identity. In late 2016, Human Rights Watch documented a range of abuses against lesbian, gay, bisexual, and transgender (LGBT) students in secondary school. They include bullying, harassment, discriminatory policies and practices, and an absence of supportive resources that undermine the right to education under international law and put LGBT youth at risk. These students often face ridicule and even violence, including by teachers and administrators. 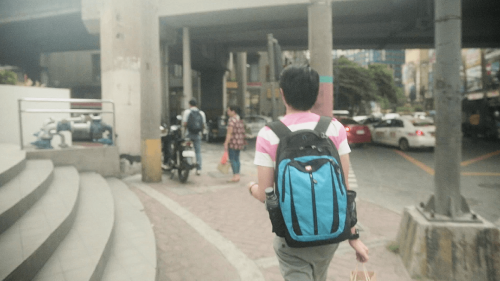 In September, the House of Representatives passed House Bill 4982, a proposed law against discrimination based on sexual orientation and gender identity and expression (SOGIE).

On May 23, after Islamist rebels took over the predominantly Muslim city of Marawi, Mindanao, the Philippine government launched a counterattack. The fighting destroyed the city and left at least 1,112 people dead, mostly alleged rebels but also civilians and government soldiers, the government said. The government’s figures could not be independently verified.

The fighting has displaced more than 400,000 residents of the city and nearby towns, many of whom were living in overcrowded evacuation camps. Duterte declared martial law across the entire Mindanao region in response to the fighting. The rebels, known as the Maute group, are residents of Marawi and nearby provinces who linked with elements of the Abu Sayyaf armed group, which had earlier pledged support for the extremist group Islamic State (ISIS).

The escalation in unlawful killings associated with the “war on drugs,” and President Duterte’s open defiance of international human rights standards and confrontational stance towards critics, have roiled the Philippines’ relationships with its closest Western allies.

Duterte has repeatedly threatened to seek stronger ties with countries such as China and Russia, which have not been critical of his drug-campaign abuses. Historically, the Philippines has had close relationships with the United States and European Union countries.

In March, European Trade Commissioner Cecilia Malmström warned that unless the Philippine government addressed EU concerns about human rights abuses, the Philippines risks losing tariff-free export of up to 6,000 products under the EU’s human rights benchmarks linked to the Generalized Scheme of Preferences Plus (GSP+) trade scheme.

In April, US President Donald Trump signaled a break with the Obama administration’s criticism of Duterte’s drug war killing campaign by praising it as a “great job” and inviting Duterte to the White House. In May, US senators introduced a bill, the Philippines Human Rights Accountability and Counternarcotics Act of 2017, which aims to restrict arms exports to the Philippines, support human rights groups, and assist the Philippines in dealing with the drug problem. The bill had been referred to the US Senate Foreign Relations Committee at time of writing.

The US remains a key source of military financial assistance, with the Trump administration allotting US$180 million for 2017. Australia, whose officials have criticized the “drug war” killings, has nevertheless promised to extend military aid to the Philippines, mainly for counterterrorism.

In January 2017, Japan pledged to the Philippines a five-year, $800 million Japanese government Overseas Development Assistance package to “promote economic and infrastructure development.” Tokyo also promised financial support for drug rehabilitation projects in the Philippines. China has pledged assistance to the Philippines of as much as US$24 billion-worth of projects under Beijing’s “One Belt, One Road” program.

In August, the education secretary expressed her commitment to see the Philippines join the Safe Schools Declaration, an intergovernmental political commitment to protect students, teachers, and schools from attack during armed conflict, but did not give a timeframe for doing so.

In May, the Philippines underwent its Universal Periodic Review, which focuses attention on the human rights record of each UN member state every four years. In its September response, the Philippines rejected nearly every recommendation to bring an end to extrajudicial killings and to ensure an independent investigation into the deaths. The High Commissioner for Human Rights expressed grave concern at Duterte’s open support for a "shoot-to-kill” policy and the “apparent absence of credible investigations.”