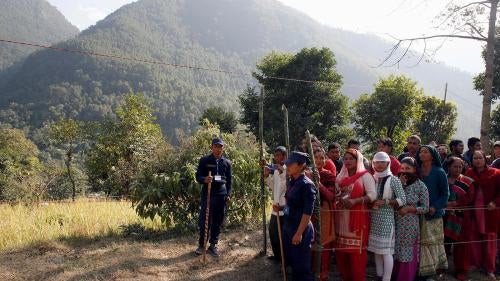 Shifts in Nepal’s political landscape continued throughout 2017, with a new prime minister taking office in June. Local district elections, held for the first time in 20 years, were a significant step in the country’s political transition following the 1996-2006 civil war. However, public differences between political parties and interest groups over power sharing underscored the country’s deep, ongoing rifts, which had intensified with the 2015 constitution.

Successive administrations stalled on delivering justice for atrocities committed during the decade-long civil war between government forces and insurgent Maoist forces. The slow pace of reconstruction efforts around the devastating 2015 earthquakes, mired by corruption, reinforced social and economic marginalization.

Severe flooding during the monsoon season from June to August affected an estimated 1.7 million people, with 65,000 homes destroyed and 461,000 displaced.

Nepal’s transitional justice process has been plagued by a lack of political will from all parties, as well as the military. At least 13,000 people were killed and over 1,300 were forcibly disappeared during the country’s decade-long conflict, yet political leaders continue to neglect calls for accountability.

Although the mandate for the Truth and Reconciliation Commission (TRC) and the Commission of Investigation on Enforced Disappeared Persons (CIEDP) was extended for another year in February 2017, political and resource constraints obstructed their work. The government failed to amend the commissions’ enacting law, despite pledges and two separate Supreme Court rulings that found the act contravenes international norms due to amnesty provisions.

In August, the commissions began preliminary investigations into the more than 65,000 complaints they received. However, reports of flawed implementation, including lack of transparency and weak engagement with victims, sustained concerns among stakeholders.

Authorities consistently ignored court orders for investigations, prosecutions, and convictions. They failed for years to enforce repeated court summons and an arrest warrant for three army officers charged with the 2004 murder of a 15-year-old girl tortured to death in military custody. In April, the officers were sentenced to life imprisonment in absentia, but the government has yet to take measures to locate the convicted and uphold the landmark verdict. A fourth officer tried in the case, Maj. Niranjan Basnet, was acquitted, which the district prosecutor declined to appeal in May.

In October, Maoist leader and former parliamentarian Bal Krishna Dhungel was arrested and sentenced to 12 years in prison on a conviction from 2004 for a 1998 murder, which he had long evaded through political protection. The Supreme Court had issued an order for his immediate arrest in April, yet he remained free for a further six months until a second contempt of court was filed against the police chief for failing to act. Dhungel’s party staged protests calling for his release.

Marginalized groups have been disproportionately affected by challenges in the rebuilding process from the 2015 earthquakes that left 3.5 million homeless. The widening gap in recovery efforts has significantly impacted lower caste and indigenous ethnic groups, people with low income and education levels, and persons living with disabilities.

Government corruption also obstructed dispersal of aid, with the estimated US$4 billion raised by the international community remaining largely undistributed.

Nepal held local district elections in three phases in May, June, and September, and provincial and national parliamentary elections in November and December. In February, protests flared up over demands for constitutional amendments from Terai-based political parties seeking a greater role in governance. In March, four people were killed and dozens injured after security forces used live ammunition to disperse crowds protesting a campaign event in Saptari district. While investigating the deaths, National Human Rights Commission (NHRC) officials were attacked in their vehicle by supporters of parties boycotting the election.

Although there were some incidents of violence, and a section representing Madhesi communities in the south maintained their call to boycott the polls, the elections were largely considered free and fair.

More than 2 million Nepalis work abroad—about 10 percent of the population—although the numbers are likely higher as many workers migrate through unofficial channels. The migrant workforce contributes 30 percent of the country’s annual revenue in funds sent home.

Government reforms have failed to protect migrant workers from abusive recruitment agencies. In 2015, Nepal introduced a “free visa, free ticket” policy, through which employers in Gulf countries and Malaysia bear the costs of visas and flights tickets. After two years, however, the policy’s implementation remains inadequate.

Authorities’ failure to enforce protections has allowed agencies to continue charging exorbitant fees for jobs abroad. Other exploitative practices include confiscation of travel documents and false depictions of the work. In tangent with recruitment debts, these leave migrants highly vulnerable to forced labor and other abusive conditions.

In 2016, Nepal lifted the ban on domestic workers migrating to the Gulf and introduced new guidelines on employers and recruitment agencies in countries of employment. In April 2017, the parliament’s labor committee recommended the ban be re-implemented.

In line with a 2007 Supreme Court decision, the government has gradually introduced a legal third gender on various documents, including citizenship certificates and passports. In 2017, the court issued a new judgment to emphasize the government’s responsibility to issue such documents. Activists remain frustrated with the lack of implementation of a Supreme Court-mandated committee recommendation that the government recognize same-sex relationships.

Nepal has the third highest rate of child marriage in Asia—37 percent of girls are married before 18, and 10 percent by 15. Progress toward ending the practice has stalled. In 2016, the government launched a national strategy to end child marriage by 2030, but they have yet to announce any practical action plan.

Chaupadi, a practice that forces menstruating women and girls from their homes, was criminalized under a new law in August after a series of publicized deaths of women and girls in menstrual sheds. However, the Supreme Court had already outlawed the practice in 2005 with little practical outcome.

Women won 41 percent of seats in the local district elections as a result of compulsory quotas, yet higher level posts remained predominantly male. While the constitution reserves one-third of seats in parliament for women, only 7 percent of direct polling candidates for the parliamentary elections were women.

In the face of strained relations with India, Nepal’s ties with China grew stronger over 2017, particularly as tensions between China and India flared during a standoff over the disputed Doklam plateau near Bhutan.

In April, Nepal and China held their first joint military exercise. In May, Nepal signed China’s One Belt, One Road Initiative, which India strongly opposes, establishing wide-ranging plans for infrastructure projects including an airport and hydropower plants. The partnership posed an increased risk to Nepal’s population of Tibetan refugees due to increased cooperation between Nepal and China’s border security forces.

In October, Nepal was elected to the United Nations Human Rights Council for a three-year term, pledging to “remain committed to addressing the cases related to violations of human rights that occurred during the conflict period and providing justice to victims.”

The Office of the United Nations High Commissioner for Human Rights and the international community were largely silent on the transitional justice process, despite the country’s refusal to bring its laws into compliance with Supreme Court and international law directives.