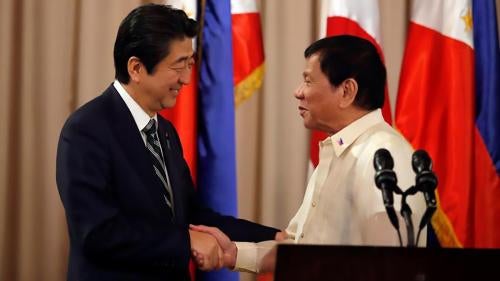 Japan is an established democracy with rule of law and an active civil society. After Prime Minister Shinzo Abe dissolved the lower house of the Diet in September, Japanese voters went to the polls on October 22, 2017. Prime Minister Abe’s ruling coalition kept the two-thirds majority that increased the chance that he will realize his long-time ambition of amending the post-World War II constitution.

Japan’s asylum and refugee determination system is tilted strongly against granting refugee status. In 2016, the Ministry of Justice reported that 10,901 people applied for asylum (the highest number ever), but the government rejected most of them and granted formal recognition as a refugee to only 28 applicants. Japan classified another 97 asylum seekers as having humanitarian status, which spares them from being forcibly returned to their home country.

Japan provides only weak legal protections for the approximately 230,000 foreigners— most of them from Vietnam and China—working in the country as part of the Technical Intern Training Program. Created in response to labor shortages for low-level jobs, the program is a main framework through which foreign migrant workers are permitted to work in Japan.

Abuses that program participants faced include payment of sub-minimum wages, illegal overtime, dangerous or unhygienic working conditions, restrictions on changing employers, forced return to their home countries, as well as requirements to pay unreasonably high fees to labor-sending agencies, and penalty fees if the trainee does not successfully complete the training. Sexual abuses and rules that violate privacy (for example, prohibitions on owning a cell phone, or having romantic relationships) are also significant problems.

In November 2016, the Diet responded by passing the so-called Technical Training Act. These stronger regulations, which took effect in November 2017, established the Organization for Technical Intern Training as the program execution body and introduced more criminal penalties against rights violations. However, key issues the reforms failed to address included restrictions related to changing employers and reliance on often exploitative labor-sending agencies.

In March 2017, the Tokyo Organizing Committee of the Olympic and Paralympic Games announced the adoption of the Sustainable Sourcing Code ahead of the 2020 games, which includes a comprehensive protection clause for migrant workers throughout supply chains for provision of goods and services for the committee. However, the committee has not yet established an effective implementation system for the code, including a grievance mechanism for affected individuals including workers and contractors.

Reflecting the recent rise of anti-ethnic Korean groups, Tokyo Governor Yuriko Koike, for the first time in a decade, did not send a eulogy to the annual memorial service on September 1 for ethnic Korean victims of the 1923 Kanto Great Earthquake. Ethnic Koreans (Zainichi) were massacred in the aftermath when demagogues claimed Koreans were looting and committing arson. Historically, ethnic Koreans have faced widespread social and economic discrimination in Japan, attitudes that persist in ultra-nationalist political groups.

In July, revisions to the penal code strengthening criminal penalties against sexual violence entered into force. The new provisions add additional offenses including in cases of abuse within families, increase sentences, permit prosecutors to proceed in cases where victims refrain from lodging a criminal complaint, and make provisions regarding sex offenses gender neutral rather than applicable only to female victims.

In December 2016, the National Personnel Authority, which handles rules and policies involving national government officials, revised its interpretation of rules on prohibiting sexual harassment to include harassment based on sexual orientation or gender identity.

In revising the government’s policy on bullying prevention, the Ministry of Education, Culture, Sports, Science and Technology (MEXT) specified for the first time that sexual and gender minority students should be protected from bullying, and required schools to promote accepted understanding of the issues among teachers and take other necessary measures. Unfortunately, in March, the MEXT failed to include information about sexual and gender minority students in its once-in-a-decade review of the national educational curriculum. As a result, the national curriculum still only refers to heterosexuality, rather than also referring to homosexuality.

A multi-party group in the parliament failed to make progress in its goals to enact legislation to address discrimination based on sexual orientation and gender identity. Similarly, parliamentarians were unable to advance their efforts to revise an existing law to eliminate the requirement that transgender persons seeking legal recognition according to their gender identity undergo sterilization surgery.

Rights of People with Disabilities

In February, the Japan Federation of Bar Associations pressed the Ministry of Health, Labor and Welfare to provide a formal government apology and financial compensation to the approximately 84,000 persons mostly with genetic disorder (including 16,500 persons forced to have sterilization surgery) victimized under the Eugenic Protection Act between 1948 and 1996.

In August, the Ministry of Health, Labor and Welfare endorsed that children younger than preschool age shall in principle not be institutionalized in alternative child care centers, in line with the “family-based care’” principle in the amendment of the Child Welfare Act in May 2016. The government also endorsed new goals, such as lifting national foster placement rate to 75 percent for preschool children within seven years, and reforming temporary custody institutions.

Japan continued to use the death penalty in 2017, executing two people in July. One had filed an appeal for a retrial, the first time since December 1999 that an inmate seeking retrial was executed.

Japan states that it pursues “diplomacy based on the fundamental values of freedom, democracy, basic human rights, and the rule of law.” However, some important diplomatic actions were inconsistent with this commitment. In December 2016, Japan abstained from the United Nations Security Council resolution on South Sudan including arms embargo, along with seven other council members. Japan’s abstention helped ensure the resolution was not adopted. In March, when the UN Human Rights Council established the international Fact-Finding Mission to Burma, Japan stated it did not support the mission. Japan subsequently abstained from Burma resolutions at the UN General Assembly in November, which called for an end to violence against ethnic Rohingya and requested that access be given to the Fact-Finding Mission, and although it sponsored the call for the Human Rights Council Special Session in December, it abstained on the resolution adopted at the session.

In September, Japan presented the resolution on Cambodia at the UN Human Rights Council. The resolution fell short of adequately responding to the rapidly deteriorating situation on the ground and ultimately failed to include robust reporting and discussion ahead of Cambodia’s national elections in July 2018.

In 2017, Japan held human rights dialogues with Burma, Iran, and Cambodia. As in the past, there was either no prior announcement, or only last minute notice, about these dialogues.

The Japanese government did hold a formal dialogue with nongovernmental organizations based in Cambodia before the human rights dialogue with the Cambodian government, a modest but significant step forward.