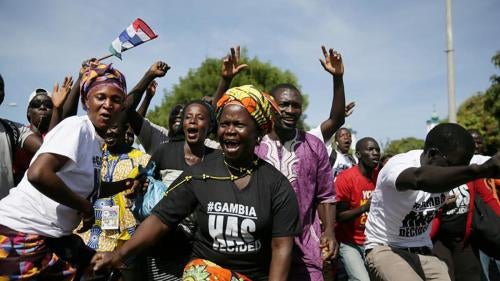 After winning the December 2016 election and taking office in January, Barrow moved quickly to distinguish his government from Jammeh’s, whose security forces used arbitrary arrests, torture, and extrajudicial killings to suppress dissent and independent media during his 22 years in power. The new government promised to make Gambia the “human rights capital of Africa,” released scores of political prisoners, and began to strengthen the judiciary and reform the security services. It also reversed Jammeh’s planned withdrawal from the International Criminal Court (ICC).

SOLO’S STORY
Muhammed Sandeng’s father, Solo, was beaten to death at the headquarters of Gambia’s National Intelligence Agency in April 2016...

Muhammed Sandeng’s father, Solo, was beaten to death at the headquarters of Gambia’s National Intelligence Agency in April 2016. Sandeng’s death, following a rare demonstration against the 22-year rule of then-president Yayha Jammeh, helped galvanize resistance to Jammeh’s authoritarianism, culminating in his defeat in December 2016’s elections.

“My father’s death served as a catalyst for change,” Muhammed now says, reflecting on his father’s legacy. “You cannot do anything better than to give your life for your country.”

Now, with new President Barrow in office and Jammeh in exile in Equatorial Guinea, Sandeng wants those responsible for his father’s death to be held accountable. “I cannot see perpetrators against my family go without consequences, and just go about their business,” he says. “Jammeh and his security forces were entrusted with protecting the lives of their fellow citizens, and they did the opposite. They need to face justice for what they have done to our people”

President Barrow committed to investigate those most responsible for human rights abuses during the Jammeh era. During 2017, the government took meaningful steps to uncover past abuses, including by announcing that it would establish a truth, reconciliation and reparations commission, beginning the trial of nine former intelligence officials for the April 2016 death of an opposition activist, and establishing a commission of inquiry into Jammeh’s abuse of public funds.

The Economic Community of West African States (ECOWAS) played a critical role in convincing Jammeh to leave office after he lost the elections, and, at time of writing, maintains a 500-strong peacekeeping force in Gambia.

The international community provided significant financial backing to the Barrow government, including support for the investigation of past human rights abuses and reform of the security forces and judiciary.

Following his defeat in the December 1, 2016 presidential election, Jammeh initially conceded defeat and promised to peacefully cede power to Barrow. Eight days later he rejected the results “in totality” and called for new elections, holding on to power despite widespread condemnation from ECOWAS, the African Union, and the UN. The security forces arrested soldiers perceived as loyal to Barrow, closed independent radio stations and detained opposition supporters, causing many to flee the country. Barrow himself left Gambia on January 13 and was sworn in as president in Dakar, Senegal, on January 19.

On January 20, after a last attempt at mediation by regional leaders and with ECOWAS troops at the Gambian border, Jammeh agreed to step down and left for Equatorial Guinea the next day. Barrow returned to Gambia on January 26 and was officially inaugurated February 18.

Gambia held peaceful legislative elections on April 6, 2017, with most seats won by the United Democratic Party (UDP). Barrow was a UDP member when he was elected to head the opposition coalition during the 2016 presidential elections.

Following Jammeh’s election defeat, and particularly after his departure for exile, Gambian courts and prisons released dozens of people wrongfully imprisoned during Jammeh’s time in office. This included opposition leader Ousainou Darboe, serving a three-year prison term after being detained during a 2016 peaceful protest, who was released in December 2016 along with 40 other opposition supporters.

Proposed legislation on the creation of a human rights commission, which was drafted in 2016 with UN assistance, was presented to the National Assembly for adoption in November.

In the first trial for human rights abuses committed during the Jammeh era, a Gambian court in March began the trial of nine officials of the National Intelligence Agency, including its former head, for the April 2016 murder of opposition activist Solo Sandeng.

The minister of justice, Aboubacarr Tambadou, has not provided a timeline for further prosecutions of human rights abusers, citing the need to strengthen the justice sector before further trials. Gambian human rights groups are concerned that the government has not taken steps to preserve documentary and physical evidence of security force abuses. In October 2017, Gambian victims, civil society organizations, and international human rights groups formed a coalition to campaign to bring Jammeh and his accomplices to justice.

The bodies of four people suspected of being forcibly disappeared during the Jammeh era were exhumed in March 2017, including that of Solo Sandeng. The Ministry of the Interior also in February 2017 created a specialized police unit, the Panel on Missing Persons, to investigate enforced disappearances during the Jammeh era.

The Gambian government formally informed the UN secretary-general on February 10 that it was reversing Jammeh’s withdrawal from the ICC. Ousmane Sonko, minister of the interior from 2006 until he fled the country in September 2016, is being investigated in Switzerland for alleged crimes against humanity committed during the Jammeh era.

The Ministry of Justice in October drafted legislation establishing a Truth, Reconciliation and Reparations Commission to document violations committed from 1994 to January 2017 and oversee reparations to victims. The government in August conducted an extensive consultation process into the commission’s mandate and structure, envisioned to be established by years end.

The government has frozen assets suspected of belonging to Jammeh and has established a commission of inquiry to investigate Jammeh’s alleged abuses of public finances. The commission began hearing evidence in public sessions on August 10.

President Barrow in May 2017 underscored the need for comprehensive security sector reform, describing security institutions as “polluted” because of their ties to Jammeh-era abuses. In February 2017, the National Intelligence Agency, which during the Jammeh era oversaw arbitrary detention and torture, was renamed the State Intelligence Services and its powers of detention eroded. However, while Barrow’s government has replaced the heads of the army, police, intelligence and prison services, at time of writing it had not yet begun a wider vetting of these agencies.

At least 12 soldiers arrested between July and November on suspicion of plotting against Barrow’s government were held in military detention, without charge, until being brought to court on November 17. Gambia’s constitution requires that anyone suspected of a crime be brought to court within 72 hours. The family of one soldier alleged that he was hospitalized after being beaten in detention. At least 10 soldiers implicated in human rights abuses during the Jammeh era are still being held in military detention and have not yet been brought before a judge.

During 2017, Barrow’s government largely respected media and opposition freedoms and promised to repeal laws that curtail freedom of expression, including those criminalizing sedition, defamation and the publication of “false news.” Many journalists who fled Gambia during the Jammeh era, often after being arbitrarily detained and even tortured, have returned to Banjul. The government announced in November that it will comply with judgments of the ECOWAS Community Court against Gambia regarding the forced disappearance of two journalists and torture of another, including by negotiating compensation payments with victims’ families.

The government publicly apologized after a journalist, Kebba Jefang, was beaten by supporters of the ruling coalition after a March 5 press conference.

The Gambian government has not yet amended laws that require a permit for public rallies, an infringement of freedom of assembly. A November 12 peaceful protest against electricity and water shortages, which the government had initially authorized but then prohibited on November 11, was dispersed by riot police.

One person died and at least six were injured when Senegalese peacekeepers fired live ammunition to disperse demonstrators near Jammeh’s former residence in Kanilai on June 2. The government promised an investigation but at time of writing no report or findings had been published.

President Barrow’s government has promised not to prosecute same-sex couples for consensual sexual acts, which sharply contrasted with Jammeh’s hate-filled rhetoric toward lesbian, gay, bisexual, and transgender (LGBT) persons. However, the government has not repealed laws that criminalize same-sex conduct, including an October 2014 law that imposes sentences of up to life in prison for “aggravated homosexuality” offenses.

West Africa regional body ECOWAS played a critical role in convincing Jammeh to accept the results of the December 2016 election. After high-level ECOWAS delegations on December 13, 2016, and January 13, 2017, failed to convince Jammeh to step down, ECOWAS authorized the deployment of a military force (ECOWAS Mission in The Gambia, ECOMIG).

The European Union, United Kingdom, and United States, which were strong critics of Jammeh’s human rights abuses and provided little or no foreign assistance to his government in 2016, committed significant funds to address the dire economic situation inherited by the Barrow government. China also provided significant bilateral assistance. The World Bank in July committed US$56 million in budget support, with the International Monetary Fund in June approving a $16 million loan.

The United Nations, both through the United Nations Development Programme (UNDP) and the Office of the UN High Commissioner for Human Rights (OHCHR), provided financial and technical support to the proposed creation of the Truth, Reconciliation and Reparations Commission. The OHCHR also facilitated visits to Gambia by the Working Group on Enforced or Involuntary Disappearances and the special rapporteur on the promotion of truth, justice, reparation and guarantees of non-recurrence.