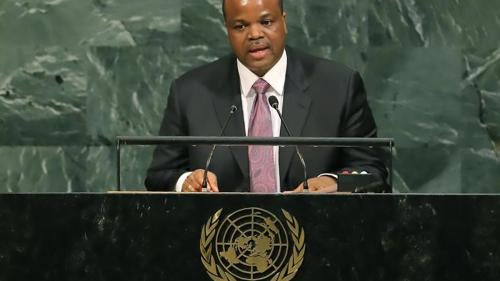 Ruled by absolute monarch King Mswati III since 1986, Swaziland continued to repress political dissent and disregard human rights and rule of law in 2017. Political parties remained banned, as they have been since 1973; the independence of the judiciary is severely compromised and repressive laws continued to be used to target critics of the government and the king, despite basic rights guarantees in Swaziland’s 2005 constitution.

In 2017, Swaziland struggled to fulfil the rights of its estimated 1.4 million population amid numerous political and socio-economic challenges, including the highest HIV infection rate in the world at 26 percent according to the United Nations Children’s Fund (UNICEF).

In September, King Mswati told the United Nations General Assembly in New York that Swaziland is committed to peace and a decent life for all. He said his government grants every citizen an opportunity to voice their views in order to constructively contribute to the social, economic, cultural, and political development of the country. He failed to mention, however, the recently passed amendments to the Public Order Act, which allow critics of the king or the Swazi government to be prosecuted, and upon conviction be fined E10,0000 (US$770), imprisoned for two years, or both for inciting “hatred or contempt” against cultural and traditional heritage.

The amendments to the Public Order Act grant sweeping powers to the national commissioner of police to arbitrarily halt pro-democracy meetings and protests, and crush any criticism of the government.

In the same month, the Swazi government approved a Ministry of Education and Training decision to introduce fees in schools, effectively ending free primary education, which had been available in the country since 2005. The Swaziland National Association of Teachers has criticized the decision as a violation of the right to primary education guaranteed in the country’s constitution.

Restrictions on freedom of association and assembly continued. The government took no action to revoke the King’s Proclamation of 1973, which prohibits formation and operations of political parties in the country. The police used the Urban Act, which requires protesters to give two weeks’ notice before a public protest, to stop protests and harass protesters.

Security legislation that severely curtails basic rights remained in force in 2017 despite calls for its amendment or repeal. The Suppression of Terrorism Act of 2008 placed severe restrictions on civil society organizations, religious groups, and media. Under the legislation, a “terrorist act” includes a wide range of legitimate conduct such as criticism of the government. The legislation was used by state officials to target perceived opponents through abusive surveillance, and unlawful searches of homes and offices.

Two leaders of a banned political party, the People's United Democratic Movement (PUDEMO), Mario Masuku and Maxwell Dlamini, remained on bail in 2017 pending the finalization of their trial on charges under the Suppression of Terrorism Act for allegedly criticizing the government by singing a pro-democracy song and shouting “viva PUDEMO” during a May Day rally in 2014. After more than a year in custody, they were granted bail in July 2015 by the Swaziland High Court. The trial continued at time of writing. If convicted, they could serve up to 15 years in prison. Both men attended the May Day rally of TUCOSWA in 2016, but their bail conditions prohibited them from addressing the workers.

Although the constitution provides for three separate organs of government—the executive, legislature, and judiciary—under Swaziland’s law and custom, the powers of all three organs are vested in the king. The prime minister should exercise executive authority, but in reality, King Mswati holds supreme executive power and also controls the judiciary. The king appoints 20 members of the 30-member senate, 10 members of the house of assembly, and approves all legislation passed by parliament.

The constitution provides for equality before the law, but also places the king above the law. A 2011 directive, which protects the king from any civil law suits, issued by then-Swaziland Chief Justice Michael Ramodibedi after Swazi villagers claimed police had seized their cattle to add to the king’s herd, remained in force in 2017.

The Sedition and Subversive Activities Act also remained in force in 2017. The act restricts freedom of expression by criminalizing alleged seditious publications and use of alleged seditious words, such as those which “may excite disaffection” against the king. Published criticism of the ruling party is also banned. Many journalists told Human Rights Watch that they practice self-censorship, especially with regards to reports involving the king, to avoid harassment by authorities.

Article 20 of the Swazi Constitution provides for equality before the law and non-discrimination, but does not prevent discrimination on the grounds of sex, language, sexual orientation, and gender identity. Swaziland’s dual legal system, where both Roman Dutch common law and Swazi customary law operate side by side, has resulted in conflicts leading to numerous violations of women’s rights.

For example, under both Swazi customary law and the Marriage Act (1964), married women are assigned a disadvantaged status, granting men more privileges and rights. The act provides that married women require the consent of their husbands to enter into certain contracts, including accessing credit from financial institutions. The Marriage Act imposes on African spouses the customary consequences of marriage while granting to non-African spouses the common law consequences of marriage. This violates the right of married women to be free from racial discrimination under the constitution and international human rights treaties.

In August 2017, human rights groups Southern African Litigation Centre and Women and Law in Southern Africa (WLSA) Swaziland challenged these discriminatory laws in court on behalf of a married Swazi woman who, upon being deserted by her husband, was unable to sell any of the livestock she purchased with her own money because she did not have her husband’s consent. At time of writing the matter had not been finalized in court.

The government has yet to pass into law the amended Marriage Act, which criminalizes marital rape, or the Sexual Offences and Domestic Violence Bill. The government developed the latter in 2009 to protect women’s and girls’ rights, and to outlaw child marriage.

On May 24, local trade unions, civil society groups, and the Swaziland Council of Churches held a protest march to raise awareness on the endemic gender-based violence. Survivors of gender-based violence have few avenues for help as both formal and customary justice processes discriminate against them.

In August, at the end of its one-year term, Swaziland handed over the leadership of the Southern African Development Community (SADC), the 15-nation regional economic institution, to South Africa. With a poor and deteriorating human rights record of its own, Swaziland failed to use its leadership of SADC to strengthen the regional body’s ability to call for improved human rights standards across southern Africa. Both SADC and the African Union (AU) have done little to press Swaziland to improve respect for human rights.

At its national policy conference in July, South Africa’s governing party, the African National Congress, called for Swaziland to be referred to SADC for abuse of human rights, suppression of dissent, and political activity. The ANC also pressed Swaziland to lift the ban on opposition political parties.

Swaziland ignored calls by the European Union to take steps to respect and promote freedom of expression, guarantee democracy and plurality, and establish a legislative framework allowing the registration, operation, and full participation of political parties.

Swaziland ratified the International Covenant on Civil and Political Rights (ICCPR) in 2004, but has since failed to submit reports in fulfilment of its obligations under the covenant. The Human Rights Committee, the treaty body overseeing the ICCPR’s implementation, reviewed Swaziland’s implementation of the treaty in the absence of a report in July 2017. The committee highlighted the issues of discrimination against HIV positive persons, and lesbian, gay, bisexual, transgender and intersex (LGBTI) people; inequality of women in marital status; and women’s participation in political life.