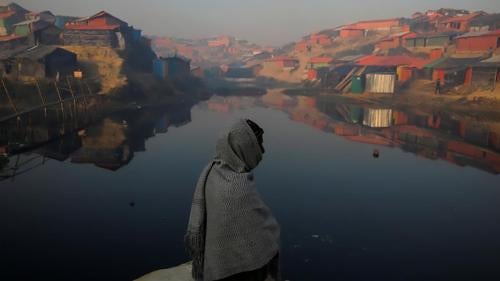 Beginning in late August, Bangladesh received a massive influx of over 655,000 Rohingya refugees escaping a campaign of ethnic cleansing by the Burmese military after a militant attack in Rakhine State, Burma. Bangladesh sought urgent international humanitarian assistance to provide for the refugees.

Bangladesh took a massive step backward on women’s and girls’ rights in 2017, passing legislation in February permitting girls under 18 years old to marry under “special circumstances,” eliminating the minimum age for marriages in this exception.

After an August 25 attack by the Arakan Rohingya Salvation Army on police posts in northern Rakhine State, the Burmese military began a catastrophic and systematic campaign of ethnic cleansing, carrying out armed attacks on Rohingya Muslim villagers, raping and sexually assaulting women and girls, and torching entire villages.

Bangladesh called for international pressure to ensure the swift return of refugees to their homes in Burma. In November, Burma and Bangladesh announced an agreement to repatriate the Rohingya refugees. However, at time of writing, serious concerns remained about the proposed repatriation process, including when and where the refugees would be resettled, if returns would be voluntary, the documentation required, freedom of movement, and the state of “temporary camps” called for as part of the resettlement process.

Bangladesh security forces—particularly the Detective Branch of the police, Bangladesh Border Guards (BGB), the Directorate General Forces Inspectorate (DGFI), and the Rapid Action Battalion (RAB)—have a long history of enjoying impunity for serious violations including arbitrary arrests, torture, enforced disappearances, and extrajudicial killings, a pattern that did not abate in 2017.

Law enforcement authorities continued to arrest opposition activists and militant suspects, holding them in secret detention for long periods before producing some in court. Several others, according to security forces, were killed in “gunfights,” leading to concerns over extrajudicial killings. At time of writing, scores remained victims of enforced disappearances.

Civil society groups faced pressure from both state and non-state actors, including death threats and attacks from extremist groups, and escalating harassment and surveillance by security forces. In June 2017, Islamist leaders threatened to “break every bone” of Sultana Kamal, a prominent Bangladeshi lawyer and rights activist, after she publicly opposed their campaign to dismantle a statue of Lady Justice outside the Supreme Court on the grounds that it constituted “idolatry,” violating Islamic tenets.

In 2017, there were at least 30 assaults on journalists, including the February murder of Abdul Hakim Shimul, a reporter for the daily Samakal newspaper, while he covered political unrest in Shahjadpur. In August, the journalist Abdul Latif Morol was arrested for satirical reporting of the death of a goat on Facebook. In early September, police detained two Burmese journalists reporting on the Rohingya crisis and held them for a week before releasing them on bail. After significant international pressure, authorities dropped the charges on October 17 and allowed the two to return home.

The Foreign Donation (Voluntary Activities) Regulation Act to control nongovernmental organizations (NGOs) further hindered freedoms of expression and association. The proposed Distortion of the History of Bangladesh Liberation War Crimes Act provides for imprisonment and fines if details of the 1971 war of independence are debated or disputed.

Sporadic attacks and threats against religious minorities continued in 2017. In mid-November, a mob of nearly 20,000 looted and burned down over 30 homes in the majority-Hindu Thakurpara village in Rangpur Sadar, in response to rumors that a villager had published a Facebook post defaming the Prophet Muhammad.

Indigenous groups in the Chittagong Hill Tracts (CHT) have for decades faced discrimination, forced displacement, assaults, evictions, and destruction of property by both Bangladeshi security forces and Bengali settlers from the mainland. In June, Bengali rioters burned 100 indigenous homes in Longadu, reportedly while army and police looked on.

Bangladesh again failed to address its decades-long problem of arsenic in drinking water, with the World Health Organization estimating that 40 million people in the country are affected by arsenic poisoning. In February, three United Nations special rapporteurs published a joint letter raising their concerns which they had sent to the government the previous year, and to which the government had not responded.

In 2017, the government finally began to relocate about a third of the approximately 300 tanneries out of Hazaribagh, a residential area of Dhaka, to a dedicated industrial zone in Savar just outside the capital. The tanneries produce environmentally hazardous waste containing chemicals such as sulfur, ammonium, and chromium.  However, many continue to operate in Hazaribagh, in contravention of multiple High Court orders, most recently in March. In November, the government announced that the move to Savar had been delayed again and would not be completed until 2019.

The government pushed forward with plans for the controversial India-backed Rampal coal power plant in 2017, despite significant concerns about air and water pollution, and risk to the Sundarbans mangrove forest, a UNESCO world heritage site.

Bangladeshi authorities failed to implement their commitments under the Sustainability Compact in 2017, including amendments to the labor laws governing Export Processing Zones to bring them in line with international standards. In general, factory officials were not held accountable for attacks, threats, and retaliation against workers, particularly those involved with unions.

From December 2016 to February 2017, the government and garment manufacturers cracked down on workers for demanding higher wages, dismissing workers and arresting union leaders based on vague or repealed offenses from the draconian Special Powers Act of 1974.

Although the global garment union IndustriALL, the government, and the garment manufacturers’ association reached an agreement in February after significant international and corporate pressure to release the 34 workers and union leaders, they continued to face criminal cases.

The Alliance for Bangladesh Worker Safety, a platform of North American retailers that sets timeframes and accountability for safety inspections and training programs, announced in 2017 that it would not extend its tenure after mid-2018. The Alliance announced in mid-November 2017 that it would transition to trusted, credible local partners, but had yet to provide more details on what that entailed at time of publication. The Accord on Fire and Building Safety in Bangladesh, a European counterpart, decided to extend its tenure until 2021. Both were set up in the aftermath of the Rana Plaza building collapse in 2013 that killed more than 1,000 workers.

With among the highest rates of early marriage in the world, the government had pledged to end marriage of children younger than 15 by 2021, and marriage younger than 18 by 2041. However, in February 2017, the government greatly undermined progress toward these goals by approving a law that permits girls under age 18 to marry under “special circumstances,” such as “accidental” or “illegal pregnancy,” with permission from their parents and a court. There is no age limit to how early girls can marry under this exception.

Stalking, sexual harassment, and violence against women and girls continued in 2017. In Bogra, a city in north Bangladesh, a university student accused Tufan Sarkar, a trade union leader linked to the ruling Awami League, of abducting and raping her in July. In an attempt to silence the victim, Sarkar picked up her and her mother, tortured them for hours, and then tonsured their heads, sparking widespread public outrage and protests in the city. Police arrested Sarkar, his wife, and several associates two weeks later, and filed charges in October.

Also in July, a student leader, and apparent repeat offender at Sirajganj Government College publicly harassed and assaulted a student because she protested against his repeated threats to sexually assault her. He was later arrested on assault charges.

Indigenous women and girls faced multiple forms of discrimination due to their gender, indigenous identity, and socio-economic status and were especially vulnerable to sexual and gender-based violence.

Millions of Bangladeshis work abroad, sending home remittances worth billions of dollars. In 2017, 100,000 women migrated overseas, mostly to Gulf countries, for domestic work. Many Bangladeshi migrant workers have reported being deprived of food and forced to endure psychological, physical, and sexual abuse. In some cases, such abuses amounted to forced labor or trafficking.

Bangladesh has set a minimum salary for domestic workers in the Gulf equivalent to roughly US$200 per month, the lowest minimum salary of all sending countries. Its regional embassies do not provide adequate protection and assistance to many Bangladeshi nationals there.

Although the government took some steps in recent years, such as declaring legal recognition of a third gender category for hijras, policy implementation remains weak and sexual and gender minorities remained under constant pressure and threat.

The government twice rejected recommendations during its Universal Periodic Review at the UN Human Rights Council (UNHRC) to repeal the colonial-era law forbidding same-sex conduct. In May, the Rapid Action Battalion raided a gathering in Dhaka, arresting 28 men and publicly accusing them of homosexuality and drug possession, flouting privacy rights.

The UN secretary-general and the UN High Commissioner for Refugees denounced the “ethnic cleansing” campaign in Burma against the Rohingya. Several governments pledged aid to assist the refugees, but humanitarian agencies asked for more. In December, Bangladesh sponsored a special session of the UNHRC to bring attention to the plight of Rohingya in Burma.

India and the United States remained largely silent on the country’s human rights record in their public statements in 2017, save in relation to the Burmese Rohingya refugee crisis, when they expressed support for Bangladesh’s efforts in dealing with the massive influx of refugees. However, the US did allocate $32 million in humanitarian aid for Rohingya in Bangladesh.

The UK government raised some concerns about the rights situation in Bangladesh, but without sufficient vigour or consistency, and preferred private statements to strong statements of public concern. In November, UK Prime Minister Theresa May publicly condemned the ethnic cleansing of the Rohingya and pledged to work with Bangladesh and other regional partners to deal with the crisis.

In February and March respectively, the UN Working Group on Enforced or Involuntary Disappearances and the Human Rights Committee raised concerns about the increasing number of enforced disappearances and the lack of investigations and accountability. The Bangladeshi government ignored the statements, as well as repeated requests for visits by UN special rapporteurs and the Office of the High Commissioner for Human Rights.