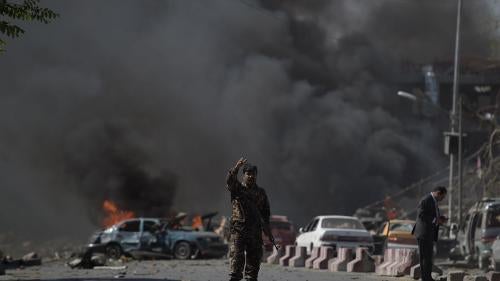 Fighting between Afghan government and Taliban forces intensified through 2017, causing high numbers of civilian casualties. Principally in Nangarhar province, government forces also battled the Islamic State of Khorason Province (ISKP), the Afghan branch of the extremist group Islamic State (also known as ISIS). A number of particularly deadly suicide attacks in urban areas, some claimed by ISKP, killed and wounded more than 2,000 people across the country. A growing number of these attacks targeted Afghanistan’s Shia Hazara minority. Civilian casualties caused by government forces during ground fighting declined; however, US forces expanded their use of airstrikes, including drones, in military operations, causing increased civilian casualties.

Afghan National Security Forces (ANSF) continued to rely on irregular militia forces, some of which killed and assaulted civilians. War crimes suspect Gulbuddin Hekmatyar, one of several political figures accused of shelling Kabul during the 1990s, returned to Kabul as part of a 2016 peace deal with the government; clashes between his militia forces and rivals killed at least 20 civilians. Both the Taliban and ANSF used schools for military purposes, which, together with countrywide insecurity, deprived many children, especially girls, of access to education.

The government made some progress in adopting legislation to curb torture, but failed to prosecute serious offenders. Promised reforms to end the use of unscientific and abusive “virginity examinations” for women taken into custody, and the imprisonment of women for so-called morality crimes, did not materialize. Only a fraction of the reported cases of violence against women resulted in prosecutions. The government announced that district council and parliamentary elections would be held in July 2018, three years behind schedule. However, political infighting and security concerns threatened to delay the vote.

The United Nations Assistance Mission to Afghanistan (UNAMA) documented 2,640 war-related civilian deaths and 5,379 injuries in the first nine months of 2017, a slight decrease over the same period in 2016. The Taliban and groups claiming allegiance to ISKP were responsible for two-thirds of these. Civilian deaths and injuries by pro-government forces and their allies during ground engagements declined; however, those from aerial operations by government and international forces increased by 52 percent to 205 deaths and 261 injured.

Insurgent attacks in major cities caused hundreds of civilian deaths and injuries. ISKP claimed responsibility for the March 8 attack on Kabul’s Daud Khan hospital, the main treatment center for wounded Afghan soldiers, that killed at least 30 and wounded dozens. In that attack, insurgents reportedly dressed as doctors shot dead patients in their beds. The May 31 truck bomb that killed at least 92 and wounded more than 500 was the deadliest such attack ever in Kabul. Suicide attackers targeted Shia mosques in Kabul and Herat, killing more than 100.

On August 3-5, local Taliban forces in Sar-i Pul province launched an assault on the village of Mirza Olang, following weeks of fighting between insurgents and Afghan Local Police (ALP) forces. According to UNAMA, the Taliban separated women and children from men, and shot dead at least nine ALP and other pro-government militia members, along with 27 male civilians; among them were four boys ages 13 to 17, and 13 men over 60. They also killed one woman as she was trying to flee. The commander responsible, a relative of the Taliban “shadow governor,” had self-identified as being affiliated with ISKP.

The number of internally displaced persons (IDPs) who fled from their homes due to the conflict surged as fighting intensified. More than 250,000 were displaced in the first 10 months of 2017, bringing the nationwide total to at least 1.7 million people.  Among the displaced were hundreds of thousands of refugees coerced out of Pakistan with the support of the United Nations High Commissioner for Refugees (UNHCR) in 2016. Attacks on civilians contributed to depression and other mental disabilities; Afghanistan has few community-based mental health services to provide treatment.

On March 12, the Attorney General’s Office issued a report on prosecutions under the Elimination of Violence against Women (EVAW) law revealing that mediation remains the preferred route for most prosecutors, which women are often compelled to accept due to pressure from family and justice officials. Registered cases represent only a fraction of the actual crimes of violence against women. In late 2016, the Afghanistan Independent Human Rights Commission (AIHRC) investigated 5,575 cases, noting that most cases of violence against women go unreported. A long-standing effort to reform family law, including divorce provisions, remained stalled.

On March 4, the revised penal code was adopted by presidential decree. It incorporated all the provisions of the EVAW law, while strengthening the definition of rape. However, because a number of conservative members of parliament have opposed the EVAW law, some activists campaigned to preserve the law in its stand-alone form decreed in 2009. In response to their efforts, in August President Ghani ordered the Ministry of Justice to remove the EVAW chapter from the new penal code.  The controversial reversal has left the status of the law in limbo.

A long-promised plan by the Afghan government to implement UN Security Council Resolution 1325, which calls for women’s equal participation in issues surrounding peace and security, was further delayed during the year. The Kabul Process peace talks in June included only two women among 47 government and international representatives.

Deaths and injuries among women in the conflict increased sharply in 2017, with 298 deaths and 709 injured in the first nine months of the year. Most occurred as a result of suicide bombings and aerial attacks.

An April report by UNAMA documented the highest levels of torture of conflict-related detainees in police custody since 2010. The report singled out the Kandahar police for torturing 91 percent of detainees by forcibly pumping water into their stomachs, crushing their testicles with clamps, suffocating them to the point of losing consciousness, and applying electric current to their genitals.

In a significant sign of progress in curbing torture, the government in March enacted anti-torture legislation, as part of the new penal code. The law left out a compensation system for victims of torture by state security forces, but in August the cabinet approved an annex to provide for victim redress.

Although the Afghan Constitution prohibits torture, the new provisions expand the definition in conformity with the UN Convention Against Torture, and create a new monitoring body, the Commission Against Torture; however, as of December it was not clear whether this would include staff from the AIHRC. The government did not prosecute any senior officials accused of torture.

In May, a report by the UN Committee Against Torture described “numerous and credible allegations” of severe human rights abuses, including torture and extrajudicial killings, and urged that all alleged perpetrators “be duly prosecuted and, if found guilty, convicted with penalties that are commensurate with the grave nature of their crimes.”

In January 2017, the Afghan attorney general ordered nine of First Vice President Abdul Rashid Dostum’s guards to answer questions in connection with the abduction, illegal imprisonment, and sexual assault of rival Uzbek politician Ahmad Ischi. Dostum refused to allow his guards to report to the attorney general, who then settled for interviewing seven of them on the premises of Dostum’s compound. On November 1, seven of the bodyguards were convicted in absentia of sexual assault and illegal imprisonment, and sentenced to five years’ imprisonment. As of December 2017, none was in custody.

In Afghanistan, same-sex relations are punishable by 5 to 15 years in prison under a law that bans all sex between individuals not married to each other.

The year looked likely to surpass 2016 as the bloodiest since 2001 for Afghan journalists, with 10 killed in the first six months of the year, most of them victims of insurgent bombing attacks. Since January, the Afghan Journalists Safety Committee (AJSC) recorded 73 cases of violence and threats against journalists, including deaths, detentions, beatings, and intimidation. Government officials and security personnel were responsible for slightly more than half of the cases; insurgent groups were responsible for the deaths of 10 journalists in suicide attacks in Kabul and Khost.

Protests, Excessive Use of Force, and Restrictions on Freedom of Assembly

On June 2, civil society groups, political activists, and relatives of victims of the May 31 truck bomb attack converged in central Kabul to protest deteriorating security conditions. Some participants threw stones at police, and the group included some armed men among the crowd.

Security forces, principally the presidential palace guard, used water cannons to disperse the crowd, but then used live ammunition despite no real threat to public safety—first firing guns over the heads of demonstrators, injuring some protesters, then shooting into the crowd, killing seven. The government promised to conduct an investigation. As of December, the results of this investigation had not been made public.

The government subsequently accelerated its consideration of new legislation to restrict demonstrations. The Law on Gatherings, Demonstrations and Strikes narrows the definition of allowed venues for protests; prohibits “influential people” from “politically intervening” in any kind of protest, without clearly defining those terms; and limits protests only to those that have “reform objectives” rather than criticism of government policies alone. Civil society groups condemned the law, which as of December, was pending before parliament.

Despite the fact that the government in 2016 criminalized military recruitment of Afghans under 18 years old, the practice continued, most notably among the ALP and pro-government militias. The AIHRC reported on increased recruitment by groups affiliated with ISKP in Nangarhar. Both the ANSF and the Taliban continued to occupy or use schools for military purposes in contested areas, affecting the access to education of thousands of children, especially girls.

Conflict-related deaths and injuries of children continued at high rates, with 689 deaths and 1,791 injuries in the first nine months of 2017. Almost half of the children detained in relation to the conflict reported being tortured or mistreated.

On August 22, US President Donald Trump outlined a new US strategy for the war in Afghanistan, vowing to expand military operations to target criminal and terrorist networks, pressure Pakistan to end support for Afghan insurgents, and set no timetable for withdrawal.

In September, the Trump administration reportedly was considering a CIA request to carry out covert drone strikes in Afghanistan; the US military has had exclusive authority to carry out such strikes.

Trump authorized the deployment of an additional 3,900 troops, but the Pentagon acknowledged that actual troop levels were already close to 11,000, significantly higher than the 8,000 previously reported. US airstrikes increased through 2017, and the US provided Black Hawk helicopters and other equipment to support expanded Afghan government air operations.

In September, diplomatic sources indicated that the US was supporting an Afghan government initiative to create an additional village defense force, the Afghan National Army Territorial Force. The force would reportedly absorb some existing militias under army command, though it remained unclear how it would avoid replicating the record of the abusive Afghan Local Police. The US military command in Afghanistan also began classifying key data related to the development of Afghan security forces, most of which has been public since 2008.

In February, the European Union (EU) signed a new agreement with Afghanistan requiring it to accept rejected asylum seekers from Europe and undertake other measures to reduce migration. The agreement also included EU support for development, women’s rights, ending corruption, and electoral reform. In July, the European Commission proposed a new EU strategy for Afghanistan, based on these objectives. In May, NATO members agreed to provide Afghan security forces with US$1 billion annually through 2020, and in November agreed to increase their troop commitments by an additional 3,000.

On November 20, the prosecutor of the International Criminal Court (ICC) asked the court’s judges for permission to open an investigation into possible war crimes and crimes against humanity in Afghanistan committed by the Taliban and affiliated forces, Afghan National Security Forces, and US armed forces and the Central Intelligence Agency since May 1, 2003, when Afghanistan became a member of the court. The ICC’s preliminary examination of allegations of serious international crimes in Afghanistan began in 2007.