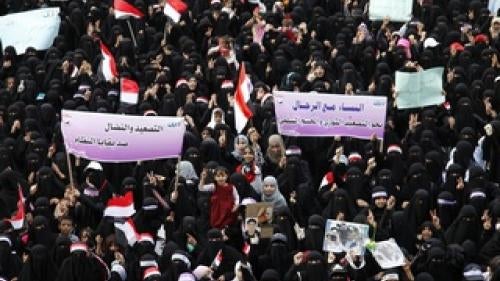 Five hundred and sixty five representatives of political parties, women, youth, and civil society launched a national dialogue process in March, which was slated to produce recommendations within six months to guide the subsequent constitutional drafting process regarding the nature of the state. At time of writing, the dialogue had yet to end because of delays caused by political maneuvering.

Clashes continued between state security forces and armed factions demanding greater autonomy in southern Yemen and between Salafist groups and armed tribesmen and Huthis in the north. The Yemeni government and the United States continued to engage in military operations with the Islamist armed group Al-Qaeda in the Arabian Peninsula (AQAP). On December 5, suicide bombing attacks both claimed and denied by AQAP against Yemen's Defense Ministry compound killed at least 52 people and injured another 161. The dead included at least seven foreign doctors and nurses working at the military hospital in the compound.

Yemen faces a growing humanitarian crisis, with nearly half the population lacking sufficient food, according to UN agencies.

In 2012, Yemen’s parliament granted Saleh and his aides immunity from prosecution, and the current president, Abdu Rabu Mansour Hadi, has not created mechanisms to provide accountability for past abuses.

In September 2012, President Hadi decreed that an independent commission of inquiry should be created to investigate alleged violations committed during the 2011 uprising and recommend accountability for perpetrators and redress for victims. Over one year later, he had still not nominated the commissioners.

Hadi presented a deeply flawed draft transitional justice law to parliament in January, but it has yet to be passed. The draft law does not grant victims judicial redress, but is merely a victim compensation scheme, limited in time to events of 2011.

The trial began in September 2012 of 78 defendants—but not the key suspects—for the deadliest attack of the uprising, in which pro-government gunmen killed 45 protesters and wounded 200 on March 18, 2011. It wasmarred by political interference, failure to follow leads that might have implicated government officials, and factual errors. In April 2013, a trial judge ordered prosecutors to reinvestigate former president Saleh and 11 top aides in connection with the incident.

AQAP carried out dozens of deadly bombings and other attacks on Yemeni security forces.  The Islamist group held several foreigners for ransom, releasing most after weeks or months, but continued to detain Saudi diplomat Abdallah al-Khalidi, who was abducted in March 2012.

The US carried out at least 22 drone strikes on alleged AQAP members as of mid-September, according to the New America Foundation and the United Kingdom-based Bureau of Investigative Journalism. The strikes killed between 72 and 139 people, most of them alleged militants, but lack of access to most targeted areas and the unwillingness of the United States to provide information on attacks, prevented full inquiries, including regarding civilian casualties.

A Human Rights Watch investigation of six US targeted killing operations in Yemen—one in 2009 and the rest in 2012-13—found two attacks were unlawfully indiscriminate and four others raised serious laws-of-war concerns.

Unlawful Use of Mines

In May 2013, Human Rights Watch documented the use of antipersonnel landmines allegedly by the Republican Guards in Bani Jarmooz, an area northeast of the capital, Sanaa, in 2011. The mines have caused at least 1 death and 14 injuries of civilians, including 9 children.

Yemen is a state party to the Mine Ban Treaty, and at a meeting of the treaty in Geneva in May, renewed its commitment to the treaty, promised to investigate the allegations, and committed itself to addressing the issue by clearing the mines and assisting the victims.

The Ministry of Defense established a committee to investigate the allegations of landmine use and demine the area, but as of September the committee had yet to send an assessment team to the area.

Health workers and facilities are struggling to protect themselves from armed groups. Medecins Sans Frontieres reported 18 different attacks against their staff in Amran in the past year, including shootings, threats, and physical attacks on health workers.

In recent years, Human Rights Watch has documented cases of children participating in combat with both the First Armored Division and the Republican Guard. In June 2012, UNICEF Yemen reported several incidents of child recruitment by the Yemeni armed forces and by the armed group Ansar al-Sharia, an offshoot of AQAP. In September, the United Nations special rapporteur on children in armed conflict announced that the government had approved an action plan to end the recruitment and use of children in government armed forces.

In Aden, from February until June, the Southern Movement (or Hirak), an umbrella group seeking independence or greater autonomy for southern Yemen, prevented nearly 50,000 children from going to school on Wednesdays and Saturdays so that they could participate in a civil disobedience campaign. At least a dozen schools in Aden came under armed attack during the campaign from Hirak forces, some several times. In September, the civil disobedience campaign resumed, but campaigners agreed to exempt schools, allowing students to attend even on the weekly day of general strike.

Despite a 1994 law prohibiting death sentences for child offenders (anyone under 18 at the time of their crime), in the last five years Yemen has carried out multiple executions of individuals who may have been children at the time of their offense. At least 22 possible child offenders among convicted murderers remain on death row in Sanaa’s Central Prison, and in prisons in Ibb, Taiz, Hodeida, and Aden.

Yemen’s low rate of birth registration means that accused individuals often do not have birth certificates to establish their age. In addition, not all judges follow the law prohibiting death sentences for juvenile offenders.

In June 2013, Yemen’s Justice Ministry established a committee of forensic medical experts to assess the age of young individuals accused of serious crimes whose age remains in doubt. The committee represented an effort to tackle the problem of death sentences for child offenders, but it relies solely on forensic medicine, which has a high margin of error, according to studies carried out by the Dutch government and the UK Royal College of Pediatrics and Child Health. Social evaluations, including a review of documents such as school registration as well as interviews with community members, remain necessary to supplement forensic evidence.

Women in Yemen face severe discrimination in law and in practice. Women cannot marry without the permission of their male guardians; they do not have equal rights to divorce, inheritance or child custody; and a lack of legal protection leaves them exposed to domestic and sexual violence.

Child marriage remains widespread with doctors and the media reporting the deaths of child brides as young as 8 years old following their wedding night or childbirth. Yemen has not legislated a minimum age of marriage.

Since President Hadi took office, the authorities have eased formal controls on media, though legal restrictions remain. However there has been an increase in assaults on journalists and bloggers by the authorities and their supporters, and by militant groups, including Saleh loyalists, Huthis, and religious conservatives.

In the first half of 2013, the Freedom Foundation, a Yemeni organization that monitors press freedom, recorded 144 attacks affecting 205 media members, including verbal harassment, confiscations, politicized prosecutions, enforced disappearances, and killings.

The government generally has not condemned these attacks, investigated them, held those responsible to account, or taken measures to protect journalists.

In September 2013, the Friends of Yemen, a group of 39 countries and 8 international organizations, reiterated their joint pledge of US$7.8 billion that was made in 2012. Only 24 percent of the aid pledges had been dispersed by September 2013, according to the Yemeni government.

The US, the largest non-Arab donor, pledged $256 million in bilateral aid from January to September 2013. It reports having provided more than $221 million in humanitarian assistance since 2012, $100 million in development and economic aid, and approximately $247 million in counterterrorism and security assistance.

Since May 2012, US President Barack Obama has in place an executive order allowing the Treasury Department to freeze the US-based assets of anyone who “obstructs” implementation of the political transition, scheduled to end with the Yemeni presidential elections in 2014.

In September 2013, for the fifth consecutive year, Obama issued a full waiver allowing Yemen to receive military assistance, despite documented use of child soldiers by various forces, including government troops and pro-government militias.

In September 2013, the UN Human Rights Council passed resolution 24/32, which made reference to different human rights challenges, including child offenders facing the death penalty, child marriage, the protection of journalists, the need for investigations into past abuses, and the passage of a transitional justice law.