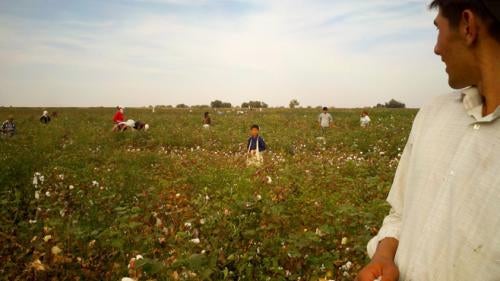 Uzbekistan’s human rights record remained abysmal across a wide spectrum of violations. The country is virtually closed to independent scrutiny. Freedom of expression is severely limited. Authorities continue to crack down on rights activists, harass activists living in exile, and persecute those who practice their religion outside strict state controls. Forced labor of adults and children continues.

Torture remains systematic in the criminal justice system. The International Committee of the Red Cross took the unusual step in April of announcing publicly its decision to end prison visits in Uzbekistan. It cited its inability to follow standard procedures for visits, including being able to access all detainees of concern and speaking with detainees in private.

Despite continuing grave abuses, the United States and the European Union advanced closer relations with Uzbekistan, seeking cooperation in the war in Afghanistan.

On January 17 Khorezm-based activist Valerii Nazarov appeared outside his home heavily drugged and unable to speak. He went missing on December 7, 2012, the day before he was to take part in an opposition rally marking the 20th anniversary of Uzbekistan’s Constitution. Before going missing, Nazarov’s house was surrounded by security services. Friends believe he was held in a mental hospital.

On February 5, 25 men broke into the home of Fergana-based rights activist Nematjon Siddikov, beating him and his three sons. Days earlier Siddikov had alleged the involvement of officials in a smuggling ring along the Uzbek-Kyrgyz border. Although in the vicinity, police failed to protect Siddikov during the attack but intervened later to arrest him on charges of defamation and assault. In May, Siddikov and one of his sons were sentenced to six years’ imprisonment.

In June, authorities deported Kyrgyz rights defender Tolekan Ismailova when she arrived at the Tashkent airport. Also in June, Ergashbai Rahimov, an activist who had advocated for the release of imprisoned journalist Solijon Abdurakhamanov, was detained for over a month in Karakalpakstan on defamation charges.

On July 8, a court in Karshi fined rights defenders Elena Urlaeva, Malohat Eshonkulova, and others a total of US$15,500 for staging a peaceful protest over the incommunicado detention of Hasan Choriev, father of the leader of Birdamlik, an opposition movement. Several women attacked Urlaeva and others moments before they began their protest outside the local office of the prosecutor general. Officials in the building did not stop the beating but later arrested the activists.

In August, 60-year-old Bobomurad Razzakov, the Bukhara region representative of the rights group Ezgulik (“Compassion”), was convicted of involvement in human trafficking and sentenced to four years’ imprisonment.

On August 23, a court in Jizzakh sentenced 75-year-old activist Turaboi Juraboev to five years in prison. Arrested in May, Juraboev was found guilty of extortion despite the fact that three of the plaintiffs withdrew their complaints. Juraboev is known for his anti-corruption work.

In July, a Tashkent court sentenced in absentia France-based activist Nadejda Atayeva, her father, and her brother to six, seven, and nine years’ imprisonment, respectively, on trumped-up charges of embezzlement. Prosecutors never informed Atayeva about the trial, which was held in secret.

In September, authorities arrested Sergei Naumov, a journalist known for his independent reporting on politically sensitive issues such as ethnic discrimination, under circumstances that appeared orchestrated to keep him from carrying out his work. Naumov was held in incommunicado detention for 12 days after a hearing marred by procedural violations and without access to independent counsel.

Eight years on, authorities continue to refuse an independent investigation into the 2005 government massacre of hundreds of people in Andijan. They had gathered to protest in connection with the prosecution of local businessmen on terrorism charges. Authorities persecute anyone suspected of having witnessed the atrocities or who attempts to speak publicly about them.

On May 13, authorities arrested activists Elena Urlaeva and Adelaida Kim as they attempted to lay a wreath of flowers at a public monument in Tashkent to commemorate the massacre’s eighth anniversary.

Torture plagues Uzbekistan’s places of detention, where it is often used to coerce confessions and occurs with impunity. Methods include beating with batons and plastic bottles, hanging by the wrists and ankles, rape, and sexual humiliation.

There is no evidence that the introduction of habeas corpus in 2008 has reduced torture in pretrial custody or ensured due process for detainees. Authorities routinely violate the right to counsel. Defense lawyers that take on politically sensitive cases have been disbarred since the passage of a law in 2009 dissolving the independent bar association.

The government regularly denies the existence of torture and has failed to implement meaningful recommendations made by the United Nations special rapporteur in 2003 or similar ones by international bodies in the past decade.

Authorities refuse to investigate torture allegations and Human Rights Watch continues to receive credible reports of torture, including suspicious deaths in custody. In March a Tashkent court sentenced 16-year-old Grigorii Grigoriev, son of rights activist Larisa Grigorieva, on trumped-up charges of theft. The judge ignored Grigoriev’s testimony that he required hospitalization after police beat him into a confession.

In June, police in Urgench hit Sardorbek Nurmetov, a Protestant Christian, five times with a book on the head and chest, kicked him in the legs, and refused him medical attention. Police ignored Nurmetov’s formal complaint and initiated charges for illegally storing religious materials in his home.

Human Rights Watch received credible reports that some women who have given birth to two or more children have been targeted for involuntary sterilization, especially in rural regions. In some areas, doctors are pressured to perform sterilizations. Lack of access to information and safe medical facilities resulted in many unsafe surgical sterilizations sometimes performed without consent of the women.

Authorities continued their campaign of arbitrary detention and torture of Muslims who practice their faith outside state controls. In April, the Initiative Group of Independent Human Rights Defenders estimated there were 12,000 persons currently imprisoned on vague and overbroad charges related to “religious extremism,” with over 200 convicted this year alone.

Authorities often extend sentences of prisoners convicted of “religious” offenses for alleged violations of prison regulations. Such extensions occur without due process and add years to a prisoner’s sentence. They appear aimed at keeping religious prisoners incarcerated indefinitely.

Consensual sexual relations between men are criminalized with a maximum prison sentence of three years. According to a local nongovernmental organization, police sometimes use blackmail and extortion against gay men due to their sexual orientation.

State-sponsored forced labor of children and adults in the cotton sector continues on a massive scale. Authorities forcibly mobilize over a million adults and schoolchildren, mainly ages 15-17 but some as young as 9, to pick cotton for up to two months each autumn. Living in the fields for weeks at a time, workers live in filthy conditions without access to safe drinking water. They contract illnesses, miss work or school, and pick cotton daily in line with quotas for which they receive little to no pay.

In response to international pressure, authorities reduced the numbers of young children picking cotton but compensated by shifting the burden to older children and adults. The forced labor of adults disrupts the availability of essential services, as authorities draw heavily on public sector workers—doctors, nurses, teachers, and other civil servants—to fulfill quotas.

After years of refusing the International Labour Organization access to monitor the harvest, Tashkent agreed to a limited monitoring mission in 2013. However, it insisted that the mission’s mandate be limited to child labor and that monitoring teams include Uzbek officials, raising serious concerns about the mission’s ability to credibly investigate abuses and to ensure the safety of those being interviewed.

Uzbekistan faced virtually no consequences for its continuing refusal to cooperate with international institutions on human rights. For the past 11 years, it has denied access to all 11 UN special monitors who have requested invitations and has failed to comply with recommendations that various expert bodies have made. At its Universal Periodic Review in April, Uzbek officials categorically declared that “there are no political prisoners in Uzbekistan” and that “the issue [of Andijan] is closed” and rejected most recommendations on key human rights issues, stating that they “do not correspond to… reality.”

The European Union’s position on human rights in Uzbekistan remained weak, with no public expressions of concern about the government’s deteriorating record and no policy consequences for Tashkent’s failure to meet the EU’s reform expectations articulated by EU foreign ministers in 2010. In November 2012, EU High Representative Catherine Ashton visited Tashkent but did not publicly voice concern with its worsening human rights situation.

The US government continued to avoid attaching any serious policy consequences for Uzbekistan’s failure to improve its rights record. The Obama administration views Uzbekistan as a critical part of the Northern Distribution Network through which it has sent non-lethal supplies to Afghanistan since 2009.

Since 2004, the US Congress has restricted assistance to Tashkent based on its rights record and imposed further limits following the Andijan massacre. However, beginning in 2012 the Obama administration exercised authority Congress granted it to waive rights-related sanctions and restarted military aid to Tashkent.

The State Department’s human trafficking report placed Uzbekistan in the lowest category—Tier 3—based on Tashkent’s systematic use of forced labor, but the Obama administration waived the sanctions provided for under this status citing national security grounds.