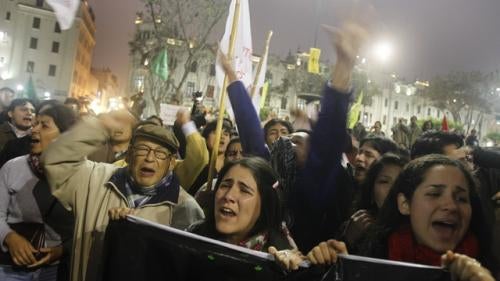 In recent years, public protests against large-scale mining projects, as well as other government policies and private sector initiatives, have led to numerous confrontations between police and protesters, and resulted in the shooting deaths of civilians by state security forces. While the number of deaths declined significantly during the first nine months of 2013, there has been little progress in investigating these cases or taking steps to ensure that police comply with international norms on the use of lethal force.

Despite the landmark convictions in 2009 and 2010 of former President Alberto Fujimori, his advisor Vladimiro Montesinos, several army generals, and members of a government death squad, progress on cases involving abuses committed under earlier administrations has been very limited.

As of September 2013, 27 civilians had been killed during protests since President Ollanta Humala took office in July 2011. The number of these fatal shootings declined from 18 in the first eight months of 2012 to three in the same period of 2013. The National Office for Dialogue and Sustainability, a government body created in August 2012, has promoted dialogue to seek peaceful resolution of social conflicts that drive protests. However, there has been little progress determining the circumstances in which the deaths occurred and holding to account police or military personnel who used force unlawfully.

Former President Fujimori was sentenced in 2009 to 25 years in prison for killings and “disappearances” in 1991 and 1992. His intelligence advisor, Vladimiro Montesinos, three former army generals, and members of the Colina Group, a government death squad, are also serving sentences ranging from 15 to 25 years for the assassination in 1991 of 15 people in the Lima district of Barrios Altos, and for six enforced disappearances. In June 2013, President Humala rejected a petition to grant Fujimori a presidential pardon requested by his family on grounds of ill-health. Media reports indicated that a commission on presidential pardons had determined that Fujimori was not suffering from a terminal or degenerative illness or grave psychological problems.

Judicial investigations into other cases have been subject to long delays and have resulted in few convictions. In a report issued in August 2013 to mark the tenth anniversary of the Truth and Reconciliation Commission’s report, the human rights ombudsman found that, despite initial efforts, Peru had failed to implement a specialized judicial system with sufficient staff and resources to bring most cases to court. According to the ombudsman, as of April 2013, 113 of the 194 cases it monitors had been closed or were in the early stages of investigation, and only 32 had resulted in a sentence.

In June 2013, the Constitutional Court held that a 1986 massacre in El Frontón prison during the first administration of former President Alan García, in which at least 130 inmates were killed, was subject to a statute of limitations since it did not constitute a crime against humanity. The court’s opinion disregarded a 2000 ruling of the Inter-American Court of Human Rights in the case of Durand and Ugarte, which ordered Peru to investigate these events and hold those responsible accountable. In September, the Ministry of Justice asked the Constitutional Court to correct the ruling on the grounds that a majority of the judges had rejected the petitioners’ argument that the opening of trial proceedings in the El Frontón case was unconstitutional, and that the court had not been asked to rule on whether the crimes committed were crimes against humanity. As of October 2013, the court had not responded.

The jurisdiction of military courts to hear human rights cases involving members of the military remains an issue. Legislative Decree 1095 adopted in 2010 by the administration of President García permits military courts to try cases in which members of the military engaged in public security operations are accused of abuses against civilians. International human rights bodies have consistently rejected the use of military prosecutors and courts in cases involving human rights violations throughout the region. As of September 2013, the Constitutional Court had still to rule on the decree’s constitutionality, which has been challenged by Peruvian human rights advocates.

Torture is a chronic problem. One third of the 144 victims whose cases have been monitored over the past decade by the nongovernmental organization Human Rights Commission (COMISEDH) died or suffered permanent physical disabilities as a result of torture, most allegedly committed by members of the police.

In August 2012, in response to the growing public profile of a small group advocating amnesty for Shining Path prisoners, President Humala introduced a bill that would undermine freedom of expression by criminalizing the “denial” of crimes carried out by terrorist organizations. As subsequently amended by Congress, the bill would impose prison sentences of 6 to 12 years for “denying” such crimes or individuals’ participation in them, if such participation was established in a final judicial ruling. To be criminalized, the expressions would need to have the “purpose of promoting the commission of terrorist crimes or publicly defending terrorism or to serve as a medium to indoctrinate terrorist objectives.” If the denial is made through social media or information technologies, the sentence would increase up to 15 years. As of October 2013, the bill still awaited a final vote in Congress.

Journalists continue to face suspended prison sentences and fines for defamation. For example, in May 2013, a judge in Huaraz, Ancash, handed down a two-year suspended prison sentence against journalist Alcides Peñaranda, director of Integración magazine, for defaming the regional president of Ancash, César Alvarez, and ordered him to pay monetary damages. The accusation concerned an article in Integración discussing corruption in the regional government that quoted from an article published in a Lima magazine by César Hildebrandt, a well-known investigative journalist. Alvarez separately sued Hildebrandt and his colleague Melissa Pérez. A Lima judge acquitted them, citing a Supreme Court ruling that public personalities must assume a greater burden of proof in libel cases where a public interest is involved.

A bill that would replace such prison sentences for criminal defamation with community service and fines is still awaiting a vote in the legislature. Although Congress approved the bill in July 2011, former President García lodged objections, and an amended version was never approved.

Women and girls in Peru have the right to seek abortions only in cases of risk to the health or life of the woman. However, the country lacks clear protocols that enable health providers to determine in which specific circumstances an abortion may be lawful. Multiple United Nations human rights monitoring bodies have all called on Peru to establish such protocols, as well as to legalize abortion in cases in which the pregnancy results from rape. At time of writing, the government had failed to comply with these recommendations.

Under Peru’s system of judicial interdiction, judges can determine that individuals with certain intellectual or mental disabilities are legally “incompetent” and assign them legal guardians, effectively suspending their basic civil rights, including the right to vote. International and regional human rights bodies have called on Peru to abolish judicial interdiction—or guardianship—because it is incompatible with Peru’s obligations under the Convention on the Rights of Persons with Disabilities.

In December 2012, the General Law on People with Disabilities entered force, but as of October 2013 the executive had yet to adopt its implementing regulations. The law aims to bring existing national legislation into line with the convention, protecting the right of people with disabilities to act in their own interests, with appropriate support when necessary. However, a commission to revise the civil code, created by the General Law on People with Disabilities, had not been established as of October 2013. Peruvian law still permits involuntary detention for treatment of people with disabilities who are under guardianship.

In March 2013, in its concluding observations on Peru’s fifth periodic report, the UN Human Rights Committee recommended that Peru “effectively prevent and eradicate the excessive use of force by law enforcement officials and members of the security forces” and “intensify its efforts to eradicate torture.” It also called on Peru to adopt legislation to prohibit discrimination on the basis of sexual orientation and gender identity, to allow abortion in cases of rape, and to “swiftly adopt a national protocol regulating the practice of therapeutic abortion.”

In September 2013, the UN Subcommittee on Prevention of Torture and Other Cruel, Inhuman or Degrading Treatment or Punishment visited 26 prisons and police stations in different parts of Peru. Peru ratified the Optional Protocol to the Convention against Torture in 2006. The subcommittee’s chairperson expressed hope that by the end of 2013, Peru would have instituted a national prevention mechanism against torture and ill-treatment, and given it sufficient funds to function effectively.

As a relatively new member of the UN Human Rights Council, Peru has played a positive role in voting for a number of resolutions that address human rights violations in countries like Sri Lanka, Belarus, and Iran. However, Peru took a step back backwards by deciding to no longer sponsor country-specific resolutions at the UN.