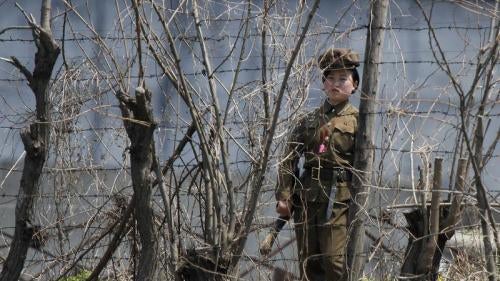 There has been no discernible improvement in human rights in the Democratic People’s Republic of Korea (DPRK or North Korea) since Kim Jong-Un assumed power after his father’s death in 2011. The government continues to impose totalitarian rule. In response to the systematic denial of basic freedoms in the country, the United Nations Human Rights Council unanimously established a commission of inquiry in April 2013 to investigate whether such abuses amount to crimes against humanity and who should be held accountable.

Although North Korea has ratified four key international human rights treaties and technically possesses a constitution with some rights protections, in reality the government represses all forms of freedom of expression and opinion and does not allow any organized political opposition, independent media, free trade unions, civil society organizations, or religious freedom. Those who attempt to assert rights, fail to demonstrate sufficient reverence for the party and its leadership, or otherwise act in ways deemed contrary to state interests face arbitrary arrest, detention, lack of due process, and torture and ill-treatment. The government also practices collective punishment for supposed anti-state offenses, effectively enslaving hundreds of thousands of citizens, including children, in prison camps and other detention facilities with deplorable conditions and forced labor.

North Korea’s criminal code stipulates that the death penalty can be applied for vaguely defined offenses such as “crimes against the state” and “crimes against the people.” A December 2007 amendment to the penal code extended the death penalty to additional crimes, including non-violent offenses such as fraud and smuggling, as long as authorities determine the crime is “extremely serious.”

The government practices collective punishment, sending to forced labor camps not only the offender but also their parents, spouse, children, and even grandchildren. These camps are notorious for horrific living conditions and abuse, including induced starvation, little or no medical care, lack of proper housing and clothes, continuous mistreatment and torture by guards, and executions. Forced labor at the kwan-li-so often involves difficult physical labor such as mining, logging, and agricultural work, all done with rudimentary tools in often dangerous and harsh conditions. Death rates in these camps are reportedly extremely high.

North Korea has never acknowledged that these kwan-li-so camps exist, but United States and South Korean officials now estimate that between 80,000 and 120,000 people may be imprisoned in them, including in camp No. 14 in Kaechun, No. 15 in Yodok, No. 16 in Hwasung, and No. 25 in Chungjin.  During the year, new satellite imagery indicated camp No. 22 in Hoeryung has been closed; it is unclear what happened to the estimated 30,000 prisoners previously held at the camp.

Freedom of Information and Movement

The government uses fear—generated mainly by threats of detention, forced labor, and public executions—to prevent dissent, and imposes harsh restrictions on freedom of information and travel.

All media and publications are state controlled, and unauthorized access to non-state radio or TV broadcasts is punished.  North Koreans are punished if found with mobile media such as DVDs or computer ‘flash drives’ containing unauthorized TV programs, such as South Korean drama and entertainment shows. Unauthorized use of Chinese mobile phones to communicate with people outside North Korea is also harshly punished.

North Korea criminalizes leaving the country without state permission. Upon Kim Jong-Un’s ascension to power, the government issued a shoot-on-sight order to border guards to stop illegal crossing at the northern border into China. Since then, the government has increased rotations of North Korean border guards and cracked down on guards who turn a blind eye when people cross.

People seeking to flee North Korea have also faced greater difficulties making the arduous journey from the North Korea border through China to Laos, and then into Thailand from where most are sent to South Korea. In a sign of the increased risks, the DPRK in May 2013 persuaded Laos to return nine young defectors arrested in Vientiane, at least five of whom were children, to an unknown fate in North Korea.

China continues to categorically label all North Koreans in China “illegal” economic migrants and routinely repatriates them, despite its obligation to offer protection to refugees under the Refugee Convention of 1951 and its 1967 protocol, to which it is a state party.  The certainty of harsh punishment upon repatriation has led many in the international community to argue that North Koreans fleeing into China should all be considered refugees sur place. Beijing regularly denies the office of UN High Commissioner for Refugees (UNHCR) access to North Koreans in China.

Former North Korean security officials who have defected told Human Rights Watch that North Koreans handed back by China face interrogation, torture, and referral to political prisoner or forced labor camps. The severity of punishments depend on North Korean authorities’ assessments of what the returnee did while in China.

Those whom authorities suspect of religious or political activities abroad, especially having any sort of contact with South Koreans, are often given lengthier terms in horrendous detention facilities known as kyo-hwa-so (correctional, reeducation centers) where forced labor is combined with chronic food and medicine shortages, harsh working conditions, and regular mistreatment by guards.

North Korean women fleeing their country are frequently trafficked into forced de facto marriages with Chinese men. Even if they have lived there for years, these women are not entitled to legal residence and face possible arrest and repatriation. Many children of such unrecognized marriages lack legal identity or access to elementary education.

North Korea is one of the few nations in the world that still refuses to join the International Labour Organization (ILO). Forced labor is essentially the norm in the country, and workers are systematically denied freedom of association and the right to organize and collectively bargain. The government firmly controls the only authorized trade union organization, the General Federation of Trade Unions of Korea.

In April, the North Korea government unilaterally shut down the Kaesong Industrial Complex (KIC), close to the border between North and South Korea, where 123 South Korean companies employ over 50,000 North Korean workers. The KIC reopened in September after intensive negotiations to set up a joint North Korea-South Korea committee to oversee the complex. However, there was no change to the law governing working conditions, which fall far short of international standards.

North Korea’s record of cooperation with UN human rights mechanisms is arguably among the worst in the world. It ignores all resolutions on the human rights situation in North Korea adopted by the UN Human Rights Council (HRC) and the UN General Assembly, and has never responded to requests for visits from the UN special rapporteur on human rights in the DPRK.

The April HRC resolution establishing a UN Commission of Inquiry (COI) on human rights in the DPRK constituted an important and warranted increase in UN scrutiny of the government’s rights record. The COI is due to report to the HRC in March 2014 on nine distinct areas of abuse “including the violation of the right to food, the violations associated with prison camps, torture and inhuman treatment, arbitrary detention, discrimination, violations of freedom of expression, violations of the right to life, violations of freedom of movement, and enforced disappearances, including in the form of abductions of nationals of other States, with a view to ensuring full accountability, in particular where these violations may amount to crimes against humanity.”

In an oral update given to the HRC on September 16, Michael Kirby, chair of the COI, stated that “testimony heard thus far points to widespread and serious violations in all areas that the Human Rights Council asked the Commission to investigate” and to “large-scale patterns that may constitute systematic and gross human rights violations.”

The COI has visited South Korea, Japan, Thailand, the United States, and United Kingdom, but to date North Korea has refused to cooperate. China has also declined to let the three COI commissioners visit the country to conduct investigations.

North Korean threats, canceling of family reunification visits, and the five-month long shuttering of the Kaesong Industrial Complex, further contributed to a chill in North-South relations. Six-party talks on denuclearizing the Korean peninsula—involving North and South Korea, China, Japan, Russia, and the US—remained moribund during the year.

Japan continues to demand the return of 17 Japanese citizens that North Korea abducted in the 1970s and 1980s. Some Japanese civil society groups insist the number of abductees is much higher. South Korea’s government expanded its attention and efforts to press for the return of hundreds of its abducted citizens.