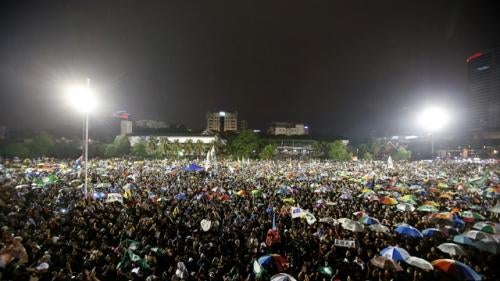 Malaysia’s general election on May 5, 2013, resulted in historic losses for the ruling Barisan Nasional (BN) coalition. Although the BN won 133 seats out of 222, it lost the popular vote to the opposition Pakatan Rakyat (PKR) coalition amid widespread allegations of election irregularities. In an attempt to explain away the election results, Prime Minister Najib Tun Razak blamed a “Chinese tsunami” favoring the opposition, and raised concerns about ethnic and religious fractures in multi-ethnic Malaysia.

The election was followed by a significant deterioration in human rights and the apparent abrupt end to Prime Minister Najib’s oft-touted reform agenda. Relevant developments in the second half of 2013 included passage of new and revised laws again permitting administrative  detention without trial, new arrests of opposition activists for organizing peaceful protests, and repression of political speech.

Following the May election, the government launched a major campaign against an apparent rise in crime that some officials attributed to the June 2012 expiration of the Emergency (Public Order and Crime Prevention) Ordinance 1969. The home minister recommended that the ordinance be reintroduced and then helped push through amendments to the Prevention of Crime Act 1959 that reauthorize administrative detention without trial. The amendments empower a five-person government-appointed panel to impose up to two years’ preventive detention on certain criminal suspects, decisions that are not subject to judicial review except on procedural grounds. Up to five years of restricted residence in remote locations could follow, renewable for another five years as decided by the home minister.

The government also has proposed electronic monitoring for felons who have served out their sentences in violation of their basic rights.

To protest alleged malfeasance during May 5 parliamentary elections, the opposition PKR coalition organized “Black 505” rallies throughout Malaysia. The government responded by arresting persons deemed to be rally organizers for failing to notify the police 10 days in advance as required by the Peaceful Assembly Act (PAA). To date, police have arrested at least 43 persons on such charges. The PAA also requires that organizers negotiate with the police on conditions for holding assemblies. At the so-called People’s Uprising Rally in Kuala Lumpur on January 12, 2013, the police set 27 conditions and followed up by investigating rule violations that were either trivial or protected under international law, such as carrying placards with “inappropriate slogans.”

In Sabah, police ordered organizers of the February 22 “Idle No More Long March” for indigenous rights and fair elections to apply for a permit, claiming that it was not an “ordinary” march as defined under the PAA.

The government restricts the right to freedom of association by requiring that organizations of seven or more members register with the Registrar of Societies in order to legally function. The registrar, appointed by the Ministry of Home Affairs, has broad authority to deny registration and has continually delayed or denied registration to groups critical of the government and to opposition political parties. During 2013, an application by the three opposition parties to register as a coalition remained mired in bureaucratic requirements, and the registrar forced a re-run of the opposition Democratic Action Party’s Central Executive Committee elections on a technicality. The home affairs minister has “absolute discretion” to declare a society unlawful.

Despite pledges by Prime Minister Najib to revoke the Sedition Act, the government uses sedition charges to silence and punish those who question government policies. Police charged five prominent opposition activists with sedition for their May 13 remarks at the Kuala Lumpur and Selangor Chinese Assembly Hall about election fraud and popular dissatisfaction with the government. One of the five, student activist Adam Adil Abd Halim, was detained for five days and is suspended from the university until his trial is over. In April, the government charged opposition member of parliament Tian Chua with sedition for alleging that the United Malays National Organisation (UMNO), the lead party in the government coalition, was linked to the armed incursion at Lahad Duta in Sabah in 2013.

Malaysian authorities maintain control over television and radio, printed newspapers, magazines and books, and films and video. The Printing Presses and Publication Act (PPPA) requires print publications to obtain a government license that the home minister may revoke at any time. The Malaysian Communications and Multimedia Act (MCMA) provides  broad authority to act against service providers that “provide content which is indecent … or offensive in character with intent to annoy, abuse, threaten or harass any person.”

In January 2013, the government banned screening of the Tamil language movie Vishwaroopam. In September, the police charged Lena Hendry, an NGO staff member, with violating the Film Censorship Act by screening No Fire Zone, The Killing Fields of Sri Lanka. The case was still pending at time of writing.

In May 2012, the Home Ministry banned the book Allah, Liberty & Love by female Canadian author Irshad Manji. In September 2013, the High Court overturned the ban on the Malay translation, but the Attorney General’s Chambers planned an appeal. The publisher’s application for judicial review of his arrest and prosecution under the Sharia Criminal Offenses (Selangor) Enactment 1995 was pending at time of writing, as was his effort to have the Federal Court declare the law unconstitutional. The publisher also faces charges in the Petaling Sharia Court. Although the High Court ruled in favor of Berjaya Books (Borders Malaysia) that had stocked the book, criminal prosecution in the Sharia court of a store salesperson for being in possession of the book was still pending at time of writing. The English language version of the bookis still banned.

The Malaysia police force has been frequently faulted for use of excessive or lethal force during apprehension of suspected criminals, and the torture of detainees. During 2013, at least 12 persons died in suspicious circumstances in police custody. In a particularly egregious case in May, truck driver N. Dhamendran died in custody at Kuala Lumpur police headquarters—a post-mortem examination found 52 injuries resulting from “sustained multiple blunt force trauma.” In an exceptional development, five police officers have been charged with murder. In other death-in-custody cases, police have flatly denied any abuse, blamed illness for the deaths, resisted family-requested second post-mortems, or relied on frequently inconclusive judicial inquests.

The Malaysia government continued its politically motivated prosecution of opposition leader Anwar Ibrahim for sodomy, appealing his January 2012 acquittal to the Court of Appeal. If convicted, Anwar faces up to 20 years in prison and caning, and the loss of his seat in parliament.

Suara Rakyat Malaysia (SUARAM), a leading Malaysian human rights organization, faced hostile government investigations throughout the year. The Malaysian government investigated SUARAM under three different laws between July 2012 and February 2013, under pressure from ministers who publicly attacked SUARAM for receiving foreign funds. In August 2013, police questioned a member of the SUARAM secretariat about a fund-raising dinner SUARAM had held in support of its work on the Scorpene submarine corruption case.

Police also harassed Samad Said, Malaysia’s 81-year-old poet laureate and co-chair of Bersih 2.0, the civil society coalition working for clean and fair elections. Police detained him in September for reciting a poem in the presence of pre-independence flags. A government civil suit against Bersih 2.0 steering committee members, including Samad Said and co-chair Ambiga Sreenevasan, was pending at time of writing.

Malaysian immigration law does not recognize refugees and asylum seekers. The government is not a party to the 1951 Refugee Convention and lacks domestic refugee law and asylum procedures. It takes no responsibility for migrant children’s education. There is no evidence that an announced plan to allow refugees to work legally had been implemented at time of writing.

The Anti-Trafficking in Persons and Anti-Smuggling of Migrants Act conflates trafficking and people smuggling, and fails to provide meaningful protection to victims of either crime. The government confines trafficking victims in sub-standard government shelters without access to services until adjudication of their legal case is complete.

Discrimination against lesbian, gay, bisexual, and transgender (LGBT) persons remains a persistent problem that is reinforced by government policy. In 2012, Prime Minister Najib declared that LGBT activities do not “have a place in the country.” In April 2013, Deputy Prime Minister Muhyiddin Yassin accused LGBT rights activists of “poisoning” the minds of Muslims with “deviant practices.” The Malaysian government led efforts to ensure that LGBT rights were excluded from the ASEAN Human Rights Declaration adopted in November 2012.

Police regularly arrest transgender persons, especially Muslims who are considered to be violating Sharia law provisions against cross-dressing, ridicule and humiliate them, and jail them in lock-ups where they are subject to physical and sexual abuse by police staff and male inmates.

The Malaysian government took no steps to repeal Penal Code article 377B, which criminalizes consensual “carnal intercourse against the order of nature” between persons who have reached the age of consent, or to replace article 377C on non-consensual sexual acts with a modern, gender-neutral rape law.

Prime Minister Najib has announced Malaysia’s intention to seek a non-permanent seat on the United Nations Security Council for the 2015-2016 term. Malaysia is a member of the UN Human Rights Council but has not signed or ratified most core human rights treaties.

The US plays an important role in Malaysia, strengthening mutual security ties and promoting negotiations on the free trade Trans-Pacific Partnership Agreement (TPPA), but says little publicly about Malaysia’s human rights record. President Barack Obama was scheduled to visit Malaysia in October but cancelled the trip due to a US budget impasse and partial government shutdown. It would have been the first visit by a sitting US president since 1966. In prepared remarks delivered at the time of the scheduled visit, Obama praised Malaysia asa global model for “diversity, tolerance, and progress,” but said nothing publicly about continuing human rights problems in the country.

Malaysia, which is a member of the Organization of Islamic Cooperation and has been positioning itself as a leading moderate Muslim state, also continues to cultivate its ties with Middle Eastern states.

At the regional level, Malaysia has blocked efforts to reach a comprehensive agreement to protect the rights of all migrant workers in ASEAN. Relations with the Philippines were strained in 2013 when an armed group from the Philippines calling itself the “Royal Security Forces of the Sultanate of Sulu and North Borneo” tried to claim a portion of the eastern Malaysian province of Sabah. The Philippines did not support the group but sought to negotiate their return. Malaysian forces ultimately routed the militants.

Malaysia continues to deepen its ties with China, exemplified in 2013 by an October state visit to Malaysia by new Chinese President Xi Jinping. The two countries agreed to improvebilateral ties and to triple the volume of bilateral trade by 2017.