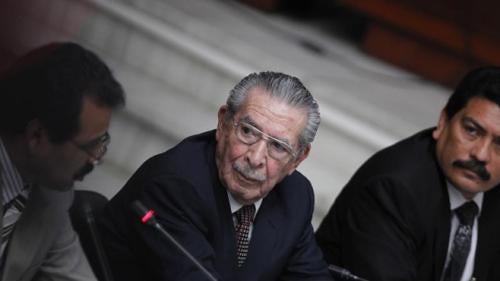 Former Guatemalan leader Efraín Ríos Montt was found guilty in May 2013 of genocide and crimes against humanity, the first time that any head of state has been convicted of genocide in a national court. The ruling was overturned on procedural grounds days later, however, and a new trial is scheduled for January 2015.

The Attorney General’s Office has made progress on other prominent human rights cases, though impunity remains high. The mandate of the United Nations International Commission against Impunity in Guatemala (CICIG), which since 2007 has supported efforts to investigate and prosecute organized crime, was extended for two years in September.  President Otto Pérez Molina has said that this will be the commission’s final term.

President Pérez Molina has continued to expand the role of the Guatemalan military in public security operations, despite its poor human rights record.

Guatemala hosted the 43rd General Assembly of the Organization of American States in June 2013, where the main topic of discussion was drug policy reform. The Pérez Molina administration has taken a leading role in promoting alternative approaches to drug policy, arguing that regulating the trade, allowing limited legal consumption and production of narcotics, could reduce violence and abuses tied to organized crime.

In a landmark ruling, former head of state Efraín Ríos Montt was found guilty in May of genocide and crimes against humanity, and sentenced to 80 years in prison. The retired general led a military regime from 1982 to 1983 that carried out hundreds of massacres of unarmed civilians. However, the verdict was overturned 10 days later, when the Constitutional Court ruled that all proceedings in the final three weeks of the trial had been invalid due to irregularities relating to an incident in March, when Ríos Montt was briefly without his own defense attorney. The case will likely have to be retried in full, with witnesses testifying once more before a different criminal court. Proceedings are scheduled to begin in January 2015. Representatives of the victims filed a petition before the Inter-American Commission of Human Rights in November, accusing the Guatemalan state of failing to provide justice in the case.

Ríos Montt’s defense has made repeated requests for the former leader to be protected from prosecution under amnesty legislation.

In April, while the genocide trial was ongoing, President Pérez Molina expressed his support for a public letter signed by a group of prominent politicians that called genocide charges against members of the army a “fabrication,” and said that the charges endangered peace.

Ríos Montt has been charged in a separate case involving a 1982 massacre in the town of Dos Erres, in the Petén region, in which soldiers murdered more than 250 people, including children. Proceedings, which are ongoing, have been delayed by legal challenges from Ríos Montt’s lawyers.

Five former members of army special forces have received lengthy prison sentences for their role in the Dos Erres massacre, while several high-level former members of the security forces have been convicted in recent years of human rights crimes committed in previous decades. They include former National Police Chief Héctor Bol de la Cruz, who received a 40-year sentence in September for ordering the disappearance of a student activist in 1984.

Powerful criminal organizations engage in widespread acts of violence and extortion. The intimidation and corruption of justice system officials, as well as the absence of an effective witness protection program, contribute to high levels of impunity. Frustrated with the lack of criminal enforcement, some communities have resorted to vigilantism. According to the Human Rights Ombudsman, 23 people were killed in lynchings in 2012, and another six by February 2013.

Despite these challenges, prosecutors have made progress in cases of violent crime, as well as torture, extrajudicial killings, and corruption—due in large part to the work of Attorney General Claudia Paz y Paz, as well as the support of CICIG.

In August, Víctor Hugo Soto Diéguez, a former head of Criminal Investigation of the National Civil Police, was sentenced to 33 years in prison for forming part of a group that executed 10 prisoners from Pavón and El Infiernito prisons in 2005 and 2006, with the alleged participation of senior government officials.

In November 2012, the CICIG released a report accusing 18 judges of issuing “illegal judicial decisions” to protect criminal networks and corrupt officials. The prosecutor’s office launched proceedings to strip 13 of the judges of their immunity, several of which have been rejected by the Supreme Court.

The Attorney General’s Office arrested eight soldiers and a colonel accused of responsibility for the killing of six protesters in Totonicapán in October 2012. Their case has been delayed by legal challenges, and at time of writing the trial had not begun.

The progress made by the Public Prosecutor’s office and CICIG in bringing charges against officials has been undercut by the dilatory practices of defendants’ lawyers, including the abuse of amparo protection appeals leading to trial postponements of months or even years.

The government deployed more than 2,500 additional members of the military in public security roles in 2013, including three newly created army units with a total of 1,500 members.

The government declared a state of emergency in several municipalities in the south of the country in May following violent clashes involving anti-mining protesters, police, and the mine’s private security guards. The measure, lifted before its 30 days were up, gave the military the power to carry out arrests without a warrant, and suspended freedom of assembly and other basic rights.

A 2013 report, produced by the government with support from the International Labour Organization, found that the proportion of children working below Guatemala’s legal minimum working age of 14 had dropped more than one-third between 2000 and 2011. The number was some 300,000, equivalent to eleven percent of those aged 7 to 13. Twenty-one percent of these children carried out work the government considers dangerous.

The exploitation of children in sexual tourism, pornography, and organized crime is a widespread problem.

Violence against women and girls is a chronic problem in Guatemala and perpetrators rarely face trial. According to official figures quoted by Guatemala’s Human Rights Ombudsman’s Office, reported rapes and sexual assaults of women and girls increased by more than a third between 2008 and 2011, while in more than 9 of every 10 of these cases, those responsible were not punished.

Abortion is illegal, even in cases of rape, except where there is a threat to the life of the woman.

Palliative care is very limited in Guatemala, even though more than 10,000 people die of cancer or HIV/AIDS each year, many in severe pain. Although the introduction of immediate release morphine in 2012 was a positive development, the country maintains some of the most restrictive regulations on opioid medications in the world, effectively denying access to essential pain medicines to thousands of patients each year.

Attacks and threats against human rights defenders are common, significantly hampering human rights work throughout the country.  Acts of violence and intimidation against trade unionists endangers freedom of assembly and association, and the right to organize and bargain collectively.

Journalists, especially those covering corruption and drug trafficking, also face threats and attacks. The UN special rapporteur on freedom of opinion and expression said in August that the level of aggression against the press had reached a level not seen in a decade. In August President Pérez Molina promised a thorough investigation into the attacks carried out in 2013, and said that the government would move forward with the creation of a UN-backed Program to Protect Journalists, promised since 2012.

The CICIG, established in 2007, plays a key role in assisting the Guatemala’s justice system in prosecuting violent crime, working with the Attorney General’s Office, the police, and other government agencies to investigate, prosecute, and dismantle criminal organizations operating in Guatemala. The CICIG can participate in criminal proceedings as a complementary prosecutor, provide technical assistance, and promote legislative reforms. As of September 2013, it had initiated 320 investigations, which resulted in 88 convictions.

The CICIG’s mandate was renewed in September 2013 for two additional years, but President Pérez Molina has stated that it will not be renewed again when it expires in 2015. Iván Velásquez Gómez, a prominent Colombian jurist, was appointed to lead the CICIG following the resignation of the previous head. Formerly an auxiliary magistrate on Colombia’s Supreme Court, Velásquez played a leading role in investigating ties between politicians and paramilitary groups in that country.

The UN High Commissioner for Human Rights has maintained an office in Guatemala since 2005. The office monitors the human rights situation in the country and provides policy support to the government and civil society.

In January, the Guatemalan government published a resolution restricting the jurisdiction of the Inter-American Court of Human Rights to incidents that took place after 1987, but withdrew the resolution later that month amid criticism.

The Inter-American Commission on Human Rights’ (IACHR) rapporteur on the rights of indigenous peoples carried out a working visit to Guatemala in August 2013, and expressed concern that licenses for mining and hydroelectric plants had been granted without properly consulting affected indigenous communities, as required by international law.

Two former Guatemalan officials allegedly involved in a plan to execute prisoners from Pavón and El Infiernito prisons in 2005 and 2006 are currently facing criminal prosecution in Switzerland, and Spain, while a third former official was acquitted in October by an Austrian court.

In October, Jorge Vinicio Sosa Orantes, a former Guatemalan soldier who allegedly participated in the Dos Erres massacre, was found guilty by a US court of lying about his role in the incident on his application for US citizenship, which he received in 2008.

The Pérez Molina government has asked the US to lift military aid restrictions established in 1990. Some military aid was restarted nearly a decade ago. In April, the US donated 42 armored vehicles to a new military-police task force operating close to the Mexican border.