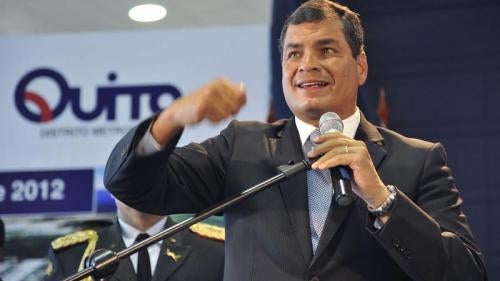 After being re-elected to a third term in February 2013, President Rafael Correa promulgated a sweeping new Communications Law in June regulating broadcast and print media, which undercuts press freedom. The Correa government continues to subject members of the media to public recrimination. Prosecutors use overly broad counterterrorism and sabotage offences against government critics who engage in public protests.

Other ongoing problems include vaguely worded restrictions affecting civil society organizations, and asylum application procedures that do not provide rigorous safeguards that international standards require. Unable to obtain a legal abortion, rape victims may resort to illegal and unsafe abortions that endanger their life and health.

The Communications Law that the National Assembly approved in June 2013 contains vague provisions that allow arbitrary prosecutions and censorship. The law’s invocation of a constitutional right to information that is “verified, contrasted, precise, and contextualized,” opens the door to censorship by giving the government or judges the power to decide if information is truthful.

A government regulatory body, the Superintendent of Information and Communication, may order media outlet directors to rectify and publicly apologize for information deemed to be untruthful, impose fines for repeated incidents, and pursue judicial action against them.  Moreover, the law grants the government extremely broad regulating powers that could severely limit free speech by defining social communication through media as a “public service” that should be provided with “responsibility and quality” and “contribute to the good life of people.”

In addition, journalists responsible for “media lynching”—defined as persistent critical reporting “with the purpose of undermining the prestige or credibility of a person or legal entity” may be obliged to issue a public apology, and may face criminal prosecution for other crimes.

In August, citing provisions of the law that define matters of public relevance and the right to a correction for disseminating inaccurate information, the communications minister ordered El Universo newspaper to publicly apologize for publishing tweets he alleged undermined the president’s honor and reputation. The minister accused El Universo of “quoting out of context” and “frivolity” (ligereza), and of publishing information of no “public relevance.”  El Universo had published tweets by Correa explaining his decision to allow oil exploitation in the Yasuní national park, and tweets by individuals to Correa opposing his decision.

President Correa continues to use criminal defamation laws to target his critics. In September 2013, the National Court of Justice upheld the conviction of opposition legislator José Cléver Jiménez for slandering the president, sentenced him to 18 months in prison, and ordered him to publicly apologize to the president and pay him approximately US$140,000. Together with two union members whose conviction the court also upheld, Jiménez had asked the attorney general to investigate Correa’s responsibility for violence that led to five deaths during a September 2010 police mutiny, accusing him of ordering an armed assault on a hospital where civilians were present.

The attorney general—who had been Correa’s personal lawyer during part of his first term of office—found that there was insufficient evidence to open an investigation and, in May 2012, a judge dismissed the case. In August 2012, Correa filed a complaint before the National Court of Justice accusing Jiménez and the others of slander. A proposal to reform the Ecuadoran Criminal Code under debate in the National Assembly as of October 2013 would eliminate several defamation provisions from the current code, but retain the crime of slander.

The Correa government frequently requires private outlets to transmit official broadcasts to refute information or critical opinions, which authorities argue is necessary to fulfill the government’s obligation to refute media falsehoods and distortions.

Corruption, inefficiency, and political influence have plagued Ecuador’s judiciary for years. With a popular mandate following a 2011 referendum, the Correa administration initiated an ambitious judicial reform process that included appointing a new National Court of Justice and hundreds of lower level judges. In December 2012, government-invited observers from Argentina, Brazil, Chile, Guatemala, Mexico, and Spain, published a report finding anomalies in the judicial appointment process, including that of top justices. The observers urged the passage of a law to regulate disciplinary procedures, defining faults clearly in order to avoid the risk of judges being suspended or punished simply for exercising their duties.

The Criminal Code contains sweeping provisions on sabotage and terrorism, which prosecutors have repeatedly applied inappropriately against participants in public protests and other gatherings. Acts classified as terrorism in Ecuador include vaguely defined crimes such as “crimes against the common security of people or human groups of whatever kind or against their property,” by individuals or associations “armed or not.” Such crimes carry a possible prison sentence of four to eight years. A new draft of the criminal code that was under congressional debate as of October 2013 would modify the existing definition of terrorism, but the new definition could still allow prosecutors to bring terrorism charges against participants in public protest.

In February 2013, a court sentenced ten people, known as the Luluncoto 10 (after the Quito neighborhood where they were detained), to one year in prison for attempted sabotage and terrorism. Arrested in March 2012 while holding a peaceful meeting to plan a public protest, most were held in pretrial detention for nine months. Their lawyers maintained the only evidence against them consisted of personal objects found in their homes, such as innocuous books, clothing, and music. As of October 2013, their appeal alleging mistrial was still pending.

Prosecutors have filed other serious charges against participants in public protests that are disproportionate to alleged acts. In February 2013, 12 students were charged for rebellion, a crime that carries a prison sentence of up to six years, for their alleged participation in violent incidents during a protest in Quito against the decision to change the name of their university. A judge later dismissed the charges after the prosecutor was unable to substantiate them. After Correa criticized the judge’s decision in his weekly TV broadcast, another prosecutor reopened the case. In a second trial in July, the 12 were convicted and sentenced to 21 days in prison.

Efforts to hold to account those responsible for human rights violations committed by governments from 1984 to 2008 made significant progress in 2013. In 2010, a special prosecutorial unit was formed to investigate 118 cases involving 456 victims (including 68 victims of extrajudicial execution and 17 of enforced disappearance), which had been documented by a truth commission created by the Correa administration. In 2012, the number of cases under investigation rose to 138. In October 2013, two former government defense ministers and eight retired military and police officers were charged with enforced disappearance and torture in connection with the illegal arrest in 1985 and torture of three people linked to a guerilla group. As of October 2013, work by a human rights investigative unit attached to the Attorney General’s Office had led to charges being filed against 36 government agents in three other cases from the period covered by the Truth Commission report.

Women and girls in Ecuador have the right to seek abortions only when their health or life is at risk or when pregnancies result from the rape of an “idiot or demented” woman. In October, as part of the drafting of the new criminal code, the National Assembly was considering a change in terminology, substituting “mental disability” for “idiot or demented.” The new language continues to imply that women and girls with disability would be “unfit” mothers, and to prevent all other victims of rape from accessing legal abortion. One in four women in Ecuador have been victims of sexual violence, according to government figures. Threat of criminal penalty drives some women and girls to have illegal and unsafe abortions, and impedes health care and post-rape services for victims of sexual violence. Fear of prosecution also hinders detection and prevention of sexual and gender-based violence.

Private drug and alcohol rehabilitation centers continue to operate to “cure” gay people of homosexuality, a practice Ecuador’s health minister has said is illegal. Following the June 2013 escape by 22-year-old psychology student Zulema Constante from confinement in one such center, the minister of health announced a crackdown on clinics engaging in this practice. According to the minister, from March 2012 to July 2013 authorities closed 15 clinics for alleged human rights violations.

Correa’s government has routinely sought to discredit human rights defenders by accusing them of seeking to destabilize the government. On at least two occasions in 2013, the communications ministry interrupted programming on the Ecuavisa channel to excoriate the nongovernmental press freedom group Fundamedios after the station transmitted interviews with its director.

The Correa administration has issued sweeping executive decrees that allow greater control over nongovernmental organizations (NGOs), some of which have been outspoken critics of the government. In June 2013, Correa issued a decree granting the government broad powers to intervene in NGO operations. The decree’s vague language, which includes authority to dissolve Ecuadorian groups for “compromis[ing] public peace,” provides scope for arbitrary application and poses a threat to a robust civil society.

As of August 2013, Ecuador had nearly 55,000 registered refugees, the largest number of any Latin American country. Most are Colombians fleeing armed conflict. Presidential Decree 1182, which Correa issued in May 2012 to regulate asylum procedures, narrows the definition of who may be considered a refugee, and establishes an unfair procedure to determine which asylum claims should be deemed “manifestly unfounded.” It also allows officials to reject an asylum application before a substantive review if well-founded reasons exist to believe the applicant had committed a crime, without providing for rigorous procedural safeguards that international standards require to ensure a full factual and legal assessment of the case. The decree also grants overly broad powers to revoke refugee status.

These provisions are counter to international standards in the Convention Relating to the Status of Refugees and its Protocol, the Cartagena Declaration on Refugees, and guidelines adopted by the United Nations High Commissioner for Refugees.

In March 2013, the Organization of American States (OAS) rejected proposals led by Ecuador with the support of other members of the Bolivarian Alliance for the Americas (ALBA) to block outside funding for the Inter-American Commission on Human Rights, including the special rapporteur on freedom of expression. However, Ecuador, as well as other ALBA members, made clear its intent to continue pressing for these changes.

In a speech to the OAS General Assembly in June, Ecuador’s foreign minister complained that the funds available to the special rapporteur on freedom of expression discriminated against OAS bodies dealing with other human rights issues, and that the rapporteur’s 2012 report on Ecuador distorted information, used biased sources, and was politically motivated. The special rapporteur continues to play an important role in advocating for press freedom in Ecuador. In October at an ALBA meeting in Cochabamba, Bolivia, President Correa said he would “think seriously” about continuing to participate in the Inter-American system of human rights protection if the changes that Ecuador advocated were not implemented.