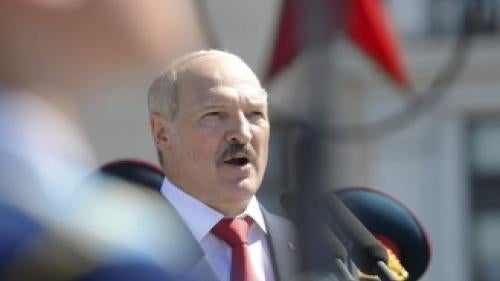 Most media are state-controlled, and authorities harass the few independent journalists and outlets that remain. In 2013, police arrested 25 journalists as they covered public protests. Courts sentenced at least four to short-term detention following convictions on misdemeanor charges. The authorities frequently prohibit reporting on public marches and open court hearings.

In March, the authorities once again denied registration toBelsat, the Poland-based satellite television channel known for its critical reporting on Belarus. Law enforcement officials warned Belarusian journalists reporting for Belsat that they would face misdemeanor charges if they continue working for an unregistered foreign media outlet.

In May, the prosecutor’s office issued a warning to Radio Liberty journalist Aleh Hruzdzilovich following him publishing a book about the 2011 explosion in the Minsk metro. The warning noted Hruzdzilovich’s doubt regarding the official investigation’s results, which led to two people being charged with committing a terrorist attack, sentenced to death, and executed in 2012. The Prosecutor’s Office warned Hruzdzilovich he could be stripped of his journalistic accreditation if he continued to spread “false information.”

In April, a court designated as “extremist” the 2012 Belarus Press Photo Contest photo album, following a complaint filed by a regional department of the state security service (KGB), and ordered that its entire print-run be destroyed. The album’s images included news and art-related topics, and included photos depicting police violence against protesters. The KGB complaint claimed that the album contained “intentionally distorted” facts about Belarus and undermined the country’s “national honor and dignity.” In November 2012, Belarusian customs officials at the Lithuanian-Belarusian border confiscated the album’s entire print-run.

In two positive developments, the authorities in June allowed a visit to Belarus by the Organization for Security and Co-operation in Europe’s (OSCE) Representative on Freedom of the Media, and in May 2013 registered Arche-Pachatak, an independent monthly that had been denied registration four times in previous years. In March, Arche-Pachatak’s bank account was reactivated, after being frozen in October 2012 due to a criminal investigation into its finances, which revealed no violations.

In June, the KGB dropped criminal charges against blogger Anton Surapin, who had been charged in 2012 with complicity in illegal border crossing after posting in his blog photographs of a cross-border freedom of speech protest.

In March, the authorities dropped a criminal investigation against Andrey Pochobut, the Belsat journalist accused of libel by President Aliaxander Lukashenka. In July, a court lifted all restrictions imposed on Novaya Gazeta journalist Iryna Khalip in connection with the two-year suspended sentence she received in 2011 for “rioting”; the court confirmed the restrictions did not require renewal. Khalip’s sentence appears to have been retaliation for her critical reporting on the December 2010 protests in Minsk.

Belarusian legislation provides for a wide range of grounds to deny registration to nongovernmental organizations (NGOs) and establishes a maximum tw0-year prison sentence for involvement in an unregistered group. The authorities rigorously enforce this legislation and burdensome NGO reporting requirements, and also conduct sudden NGO inspections. These actions force civil society groups to function on the margins of the law. Unregistered groups are not able to rent office space officially and are frequently raided by the state security services.

In 2013, the authorities issued warnings to at least three activists for involvement in unregistered groups. In June, the authorities pressed unfounded criminal charges against Aliaksei Shchadrou, a devout Catholic, for allegedly establishing an unregistered religious organization by opening a shelter with a prayer room for homeless people in his house. Police raided Shchadrou’s house twice, in February and April. During the February raid, the police confiscated his religious books. In September, the criminal case against Shchadrou was dropped.

In July, parliament adopted amendments to laws regulating political parties and public associations, but failed to loosen draconian regulations for NGOs. Parliament refused to hold hearings on a proposal by 25 Belarusian NGOs to improve legislation governing NGOs, including by simplifying the registration procedure.

Authorities showed little tolerance in 2013 for peaceful gatherings: most were prohibited and some marred by excessive police force.

Throughout 2013, dozens of peaceful protesters were convicted on misdemeanor charges and sentenced, some repeatedly, to short-term detention. In April, police held four environmental activists in “preventative” custody to stop them from attending a march in Minsk to commemorate the 1986 Chernobyl nuclear disaster. Police severely beat a protester at the march, which was peaceful, and detained four journalists who covered it.

In August, police detained two members of the Viasna Human Rights Center while handing out postcards in support of the group’s imprisoned leader Ales Bialiatski. A court fined each 3 million Belarusian rubles (approximately US$350) for violating regulations on organizing public events.

In October 2012, the Economic Court of Minsk ruled to dissolve Platforma, a prison monitoring group, for alleged tax violations. In November, the appeals court upheld the ruling in absentia, ignoring the group’s request for its representatives to be present for the hearing.

In March, Taxation Ministry officials attempted to seize the property of the Belarusian Helsinki Committee (BHC), the oldest human rights organization in Belarus, for the group’s alleged failure to pay taxes on foreign grants it received in 2002 and 2003. In previous years, the authorities attempted to dissolve the BHC for alleged tax violations and issued warnings against the group for violating NGO legislation, apparently in retaliation for its human rights work.

Imprisonment of Critics and Opposition Members

At time of writing, 11 political prisoners remain behind bars, including Ales Bialiatski, the head of Viasna Human Rights Center, who has been in jail since 2011 on politically motivated charges of tax evasion. They have limited access to lawyers and face arbitrary reprimands (administrative punishment) and ill-treatment.

Among those arrested in 2013 was Andrei Haidukou, a political opposition activist and leader of the unregistered Union of Young Intellectuals. In July, a court convicted him on charges of attempted cooperation with foreign intelligence services, which may be linked to him seeking a grant from the United States government to support his work. The court sentenced him to one-and-a-half years’ imprisonment.

Former political prisoners who have been pardoned or released early remain on police “watch lists,” which give police grounds to frequently question them. None have had their civil and political rights fully restored: they are prohibited from running for or occupying public office and must obey restrictions that limit their ability to engage in activism, including a curfew; bans on involvement in demonstrations; and a requirement to inform the authorities about any changes to their places of residence—all misdemeanor offenses. Committing three misdemeanor offences in one year may result in another criminal sentence.

Belarus remains the only country in Europe and Central Asia that uses capital punishment. In 2013, Belarusian courts sentenced three people to death. In October, the Supreme Court of Belarus annulled one of these, regarding a murder case, and ruled that the case be re-investigated.

Those condemned to death in Belarus are refused the opportunity to bid farewell to their relatives, families are not informed of the date of execution in advance, and the burial place is not disclosed.

At time of writing, no one had been executed during 2013.

Throughout the year, Belarus continued to demonstrate little interest in changing its international pariah status. In the lead up to the November 2013 Eastern Partnership Summit, the European Union demonstrated willingness to engage in dialogue with the Belarusian government by suspending a visa ban against the foreign minister, enabling him to travel to Brussels in July for the first high-level visit of a Belarusian official to EU headquarters since the 2010 government crackdown.

A European Parliament recommendation to EU institutions on EU policy towards Belarus, adopted in September, suggested to use the important opportunity presented by the November summit to gradually improve EU-Belarus relations. Progress on visa facilitation and readmission agreements, however, remained stalled over Belarus’ failure to release political prisoners and make steps towards improving the human rights situation. Stefan Fule, European commissioner for enlargement and neighborhood policy, noted in September that use of death penalty, political prisoners, and harassment of civil activists meant that Belarus "had little progress to report."

In his first and highly critical report on Belarus published in May, United Nations Special Rapporteur on Belarus Miklos Haraszti called human rights restrictions in the country “systemic and systematic.” In June, the UN Human Rights Council voted to extend the special rapporteur’s mandate, which Belarusian authorities refused to recognize, denying Haraszti a visa.

In June, the OSCE representative on freedom of the media urged Belarusian authorities to address the problems of the country’s restrictive media legislation.