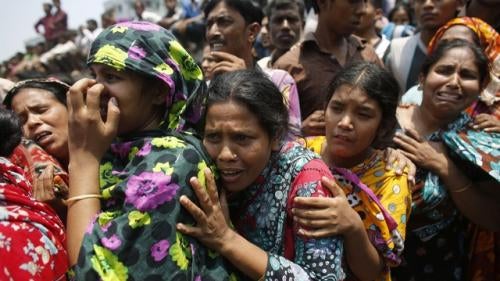 Bangladesh tumbled backwards on human rights in 2013. The government led by Prime Minister Sheikh Hasina, which has long claimed to be liberal and democratic, engaged in a harsh crackdown on members of civil society and the media. In August, it jailed prominent human rights defender Adilur Rahman Khan on politically motivated charges. “Atheist” bloggers were arrested, as was a newspaper editor. The government increasingly accused those who criticized its actions or policies, ranging from the World Bank to Grameen Bank founder and Nobel laureate Muhammad Yunus, of being involved in plots against it.

On many occasions the government employed violent and illegal measures against protesters, including against followers of the Hefazat-e-Islami movement and those demonstrating against deeply flawed war crimes trials which ended in death sentences against many accused.

Dire conditions for workers in the garment and other industries remained largely unreformed in spite of promises of improvements following the tragic collapse of the Rana Plaza garment factory in April and the deaths of over 1,100 workers. The government finally dropped frivolous charges against several labor rights leaders. The courts also ordered all charges to be dropped against Limon Hossain, a young man wrongfully shot and maimed by security forces in a botched operation in 2011.

Elections scheduled for January 2014 led to increased tensions. Although the Awami League campaigned for a caretaker system while in opposition to guard against fraud and manipulation, once in power it abolished the system, leading to opposition party threats to boycott the elections and increasing the chances of violent confrontations between security forces and protesters.

In February, Bangladesh was gripped by large-scale protests, political unrest, and violence after the International Crimes Tribunal (ICT) sentenced a leader of the Jamaat-e-Islaami party, Abdul Qader Mollah, to life in prison instead of death. Hundreds of thousands of people throughout Bangladesh took to the streets in peaceful protests to demand that Mollah be hanged. The situation took a more violent turn after the ICT, on February 28, sentenced another Jamaat leader, Delwar Hossain Sayedee, to death for war crimes. Following this verdict, Jamaat supporters took to the streets. Jamaat supporters were responsible for a number of deaths, but the security forces killed many more with often indiscriminate attacks on protesters and bystanders.

At the same time, the government began a crackdown on critics. Several bloggers who criticized the government for appearing to appease Islamic extremism were arrested.

In April, the law minister announced that the government would increase its control over social media, blogs, and online news websites. On February 16, the Bangladesh Telecommunication Regulatory Commission shut down the Sonar Banglablog, known to be operated by Jamaat activists, for spreading “hate speech and causing communal tension.” In a further attack on free speech, on April 11 the police arrested Mahmdur Rahman, the editor of an opposition news outlet, Amar Desh. Rahman was subsequently charged with sedition and unlawful publication of a hacked conversation between the ICT judges and an external consultant initially published by theEconomist magazine. On April 14, police raided the offices of another opposition newspaper, Daily Sangram, and its editor was subsequently charged for printing Amar Desh.

In August, Adilur Rahman Khan of Odhikar, a leading human rights group, was arrested under the Information and Communication Technology Act for allegedly false reporting about killings by government security forces when they dispersed the May 5-6 demonstration by Hefazat, a fundamentalist group demanding greater adherence to Islamic principles. Police raided Odhikar’s offices on the night of August 11, seizing computers which may contain sensitive information on victims and witnesses. Khan was denied bail several times and kept in prison for two months before being granted bail in October on appeal.

In October, parliament passed a bill amending the Information and Communication Technology Act to increase the length of sentences, according the police greater powers to arrest, and making certain offenses non-bailable.

At time of writing, the ICT, set up to prosecute war crimes during the country’s independence war in 1971, had handed down eight convictions, five of which resulted in death sentences. While human rights organizations have long called for fair trials of those responsible, the trials fell short of international human rights standards. In December 2012, theEconomist published damning evidence of collusion between judges, prosecutors, and the government showing that judges were instructing the prosecution on the conduct of the trials, the questioning of witnesses, and written submissions. The revelations led to the resignation of the ICT’s chief judge, but defense motions for retrials were rejected.

Although the ICT had the authority to order measures for victim and witness protection, it summarily dismissed credible claims of witness insecurity. In the Delwar Hossain Sayedee case, judges dismissed credible evidence that an important defense witness was abducted from the courthouse gates and did not order an independent investigation into the allegation. Contradictory statements by key prosecution witnesses were not taken into account in several cases, and judges severely limited the number of defense witnesses. The Appellate Division of the Supreme Court reversed the life sentence given to Abdur Qader Mollah and imposed the death penalty after the government pushed through retrospective amendments to the ICT Act, in clear violation of Bangladesh’s obligations under article 15 of the International Covenant on Civil and Political Rights (ICCPR). The amendment allowed the prosecution to appeal against the life sentence handed down by the trial judges, which the ICT Act had not previously allowed.

Human Rights Watch and the Economist, journalists and television show guests were issued orders by the ICT to show cause for contempt for critical remarks and reporting on the tribunal.

In response to the May 5-6 Hefazat protests, the police, the paramilitary Rapid Action Battalion (RAB), and the Border Guards Bangladesh (BGB) fired indiscriminately into crowds and brutally and unlawfully beat protesters, leading to approximately 50 deaths. At least a dozen members of the security forces and police officers were also killed, as well as three members of the ruling Awami League party.

Labor Rights and Conditions of Workers

Bangladesh has long had notoriously poor workplace safety, with inadequate inspections and regulations. This issue was spotlighted in April, when the Rana Plaza building, which housed five garment factories, collapsed. The building had been evacuated the day before due to cracks in the structure, but the workers had then been ordered back to work. More than 1,100 workers died.

Under domestic and international pressure, on July 15, 2013, the Bangladeshi parliament enacted changes to the Labour Act. The amendments, which did away with the requirement that unions provide the names of leaders to employers at the time of registration and allow workers to seek external expert assistance in bargaining, failed to lift a number of other restrictions on freedom of association. The law also provided exemptions to export processing zones where most garments are made. Even after Rana Plaza, Bangladeshi law remains out of compliance with core International Labour Organization standards, including Convention No. 87 on freedom of association and Convention No. 98 on the right to organize and bargain collectively.

The government also undertook to have more regular inspections of factories in 2013, but inspections which were due to start in September remained stalled by administrative delays.

In a welcome move, the authorities dropped charges against the leaders of the Bangladesh Centre for Worker Solidarity, who had been hampered and harassed in their work for years by frivolous criminal charges.

Tannery workers in the Hazaribagh neighborhood of Dhaka, one of the world’s most polluted urban sites, continue to face highly toxic working conditions. Some 150 leather tanneries operate in the area, producing leather primarily for export and discharging 21 thousand cubic meters of untreated effluent into the nearby Buriganga River each day. The government's planned relocation of the tanneries to a dedicated industrial zone, delayed numerous times since 2005, was again put off in mid-2013.

The Department of the Environment fined two tanneries for their failure to treat waste in 2013, the first time environmental laws have been enforced against Hazaribagh tanneries. Enforcement of environmental and labor laws is otherwise lacking, with negative consequences for the health and well-being of tannery workers and local residents.

Leading human rights groups in the country had discussions with doctors to revise medico-legal protocols for the treatment and examination of rape victims to exclude degrading practices like the two-finger test to draw conclusions about a woman’s “habituation to sex.” Such groups are challenging the practice as a violation of the fundamental rights to life and health with dignity in the High Court Division of the Bangladesh Supreme Court.

India, Bangladesh’s most influential international interlocutor, remained largely silent on the human rights situation. Bangladesh and India continued to hold talks on issues linked to their shared border including illegal trade and the use of excessive force by Indian border guards leading to deaths and injuries to Bangladeshi and Indian nationals.

Bangladesh’s donors were more vocal, pressing the government to end its crackdown on critics. Donors were swift in denouncing the arrest of Adilur Rahman Khan, with members of the international community observing court proceedings. However, donors were largely silent on the lack of fair trials at the ICT.

Following the Rana Plaza collapse, over 70 European companies signed an international accord designed to better protect Bangladeshi workers by requiring regular inspections of factories and making the results public. However, American buyers refused to join this accord and signed a separate agreement which has been criticized for not allowing workers to freely form unions.

The government publicly agreed to allow international monitors to observe the January 2014 elections. The international community, in particular the US, have been vocal in calling for the various parties to come to an agreement well beforehand in order to avoid contentious and potentially violent protests and a non-credible election result.