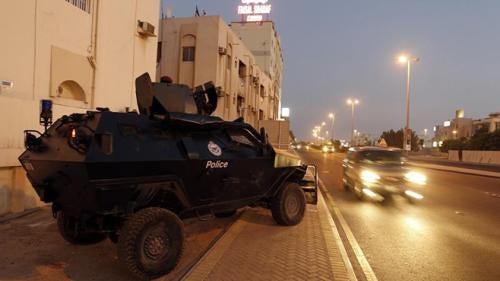 Bahrain’s human rights record regressed further in key areas in 2013 and the government made little real progress regarding reforms it claimed to pursue.Security forces continued to arrest scores of individuals arbitrarily in towns where anti-government protests regularly take place. Continuing reports of torture and ill-treatment in detention were consistent with the findings of the 2011 Bahrain Independent Commission of Inquiry (BICI). The government’s failure to implement key recommendations of the BICI stand in contrast to its claims it is making progress on human rights. The judicial system, headed by ruling family members, has yet to hold any senior official responsible for serious human rights violations that have occurred since 2011, including torture-related deaths in detention.

High-profile critics of the government remain in jail on charges that relate solely to exercising their rights to freedom of expression and assembly. Authorities continue to arrest and prosecute dissidents, including human rights defenders, on security-related charges. The arrest of the deputy head of al-Wefaq, the largest opposition group, prompted all the other opposition groups participating in a deeply flawed national dialogue process to suspend their involvement. The process resumed in February after a one-year hiatus. Of the 27 participating groups, 18 are linked to the government and they had still had not agreed on an agenda at time of writing.

Security forces continued to detain scores of individuals arbitrarily every month, according to local rights activists. In May, masked plainclothes police conducted targeted night-time raids in towns around Bahrain’s motor racing circuit in advance of the Formula 1 Grand Prix. Arresting officers failed to produce arrest or search warrants. Authorities often deny holding detainees when family members seek to locate them and initial interrogations typically take place without the presence of a lawyer, in violation of Bahrain’s constitution and code of criminal procedure. The Bahrain Centre for Human Rights documented approximately 200 cases in a six-week period between July and mid-August during which authorities falsely denied holding detained individuals for two to ten days.

Many detainees complained of ill-treatment in detention, sometimes rising to the level of torture. Four former detainees told Human Rights Watch that they were severely beaten, and in one case sexually assaulted, while in detention at the Interior Ministry’s Criminal Investigations Directorate (CID) in 2013. Bahrain’s constitution forbids the use of torture and use of evidence secured by torture, and Bahrain is a state party to the United Nations Convention Against Torture.

According to local rights groups, authorities detained scores of children for participating in anti-government protests in 2013 and regularly held them in detention facilities alongside adults. One 17-year-old boy detained at CID headquarters told Human Rights Watch that he was forced to stand in a corridor, handcuffed, and blindfolded for several hours as passing officers insulted him and one officer threatened they would rape him.

Prosecution and Harassment of Government Critics

In January, Bahrain’s Court of Cassation upheld lengthy convictions for 13 high-profile critics of the government. The evidence against them consisted of public statements advocating reforms to curtail the power of the ruling family, Al Khalifa, and confessions that the defendants alleged were coerced while they were in incommunicado detention.

In September, authorities arrested Khalil al-Marzooq, the assistant secretary-general of al-Wefaq, the main legal opposition group. Prosecutors ordered al-Marzooq to be held for 30 days to investigate charges that he had been “inciting and advocating terrorism.” The charges relate to comments he made at a rally in which he publicly denounced violence. Shortly after his arrest, al-Wefaq and other participating opposition groups announced they were suspending their involvement in the national dialogue.

On September 29, a Bahrain court sentenced 50 persons, including several rights activists, alleged to be part of the February 14th Youth Coalition, to jail terms ranging from 5 to 15 years for security-related offenses, including “establishing a terrorist group for the purpose of disturbing public security, disabling constitution and law, preventing public institution and authorities from performing their duties, attacking public and personal rights, and harming national unity.”

At time of writing Human Rights Watch was unable to determine if any of the convictions were for recognizable criminal acts warranting such serious sentences. Defense lawyers and detainees alleged that confessions were coerced.

One defendant, rights and opposition activist Naji Fateel, who received a 15-year sentence, claimed he was badly tortured in April during his first three days in detention. He alleged that authorities handcuffed and blindfolded him, beat him severely, subjected him to electric shocks, and suspended him from the ceiling. Political activist Reyhana al-Mousawi, who received a five-year sentence, alleged she was subjected to electro-shocks and forced to sign a confession.

Abdul Ghani Kanjar, the former spokesperson for the National Committee for Martyrs and Victims of Torture who fled Bahrain in 2012 and is now the overseas spokesperson for the Haq Movement for Liberty and Democracy, an unrecognized opposition group, received a 15-year sentence in absentia. Kanjar told Human Rights Watch he had no relation to the 14th February Coalition and was not familiar with the names of many of those convicted.

In August, staff at Copenhagen Airport, apparently acting on directions from Bahraini authorities, prevented the acting director of the Bahrain Center for Human Rights, Maryam al-Khawaja, from boarding a flight to Manama. Al-Khawaja, whose father and sister are in jail in Bahrain as a result of their protests against  the government, had publicly announced her plans to fly to Bahrain to monitor anti-government protests planned for August 14.

The targeting of medical professionals continues to be a concern.  In January, seven physicians and one nurse were dismissed from their positions at the Ministry of Health and convicted for providing medical care to protesters in 2011. The continuing presence of security forces around hospitals prevents neutral medical access, in violation of medical ethics and the right to health.

Since 2011, Bahrain established an ombudsman’s office in the Ministry of Interior and a Special Investigations Unit in the Public Prosecution Office, but neither of these offices took steps to hold senior officials accountable for serious human rights abuses or address what the BICI characterized as a “culture of impunity.” Senior officials told Human Rights Watch that a platoon commander in the police and a battalion commander in the criminal investigations division had been found responsible for rights violations, but it is not clear what action, if any, was taken in these cases.

In May, a Bahrain appeals court reduced the seven-year sentence of a Bahrain police lieutenant convicted of the April 2011 murder of Hani Abd al-Aziz Jumaa to six months. The lieutenant is the highest ranking security official known to have been convicted for abuses.

Freedom of Assembly, Association, and Expression

In April, Bahrain’s cabinet endorsed an amendment to article 214 of the penal code to increase from two to five years the maximum sentence for insulting the king. Lawyer Mahdi al-Basri was one of at least five individuals sentenced to prison in 2013 for allegedly insulting King Hamad bin Isa Al Khalifa on social media.

In early August, the parliament issued 22 recommendations to King Hamad in advance of planned anti-government protests on August 14.  One recommendation led to the amendment of article 11 of the 1973 Law on Public Gatherings. All demonstrations, marches, rallies, or sit-ins must now have the prior written permission of the head of state security, who can stipulate the number of permitted protesters and the time and place of any protest.

Political parties remain prohibited, but in 2013, 20 licensed political societies operated in the country, including Islamist and secular, pro-government and opposition groups. In September, Justice Minister Shaikh Khalid bin Ali Al Khalifa announced an amendment to the 2005 Law for Political Societies to require that political groups secure advance government permission to meet with foreign diplomats in Bahrain and abroad and that a Foreign Ministry representative accompany them in such meetings.

Authorities continue to restrict freedom of association by arbitrarily rejecting registration applications for civil and political groups and intrusively supervising independent organizations. The provisions of a 2012 Draft Law on Civil Organizations and Institutions submitted to parliament in January 2013 for approval are much more restrictive than those in an earlier 2007 draft, and in some respects worse than the 1989 law still in effect. At time of writing the parliament had not acted on the draft.

Law no.19 of 2009 on the Promulgation of the Law of Family Rulings regulates matters of personal status in Bahrain’s Sunni courts, but it does not apply in the country’s Shia courts, which means that the majority of Bahraini women are not covered by a codified personal status law. Domestic violence is not specifically addressed in the penal code and marital rape is not considered a crime.

Approximately 460,000 migrant workers, primarily from Asia, make up 77 percent of Bahrain’s private workforce. Due to shortcomings in Bahrain’s legal and regulatory framework and failure to enforce laws, they endure serious abuses such as unpaid wages, passport confiscation, unsafe housing, excessive work hours, physical abuse, and forced labor. Conditions for domestic workers are of particular concern. A regional Gulf Cooperation Council unified contract for domestic workers, expected to be approved in early 2014, falls short of the minimum standards outlined in the Domestic Workers Convention that the International Labour Organization adopted in 2011.

Two European Parliament resolutions strongly criticized Bahrain’s human rights record, as did a joint statement supported by 47 states in September 2013 at the United Nations Human Rights Council in Geneva. The United Kingdom and the United States, key allies of Bahrain, joined the HRC statement but generally failed to criticize publicly abusive steps taken by Bahrain in 2013. The European Union failed to use its collective weight in actively and publically pressing for the immediate and unconditional release of imprisoned Bahraini activists, three of whom are dual nationals of Bahrain and EU member states. In August, media reported that Britain was in talks with Bahrain over the sale of 12 Typhoon jets.