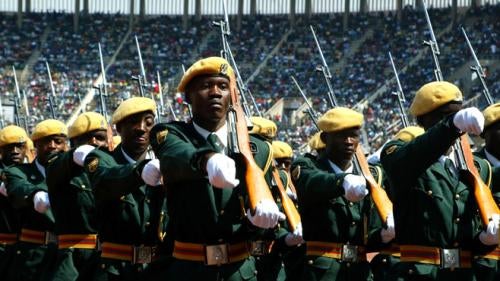 National elections in July ended a five-year power-sharing coalition, retained Robert Mugabe as president, and gave his Zimbabwe African Union–Patriotic Front (ZANU-PF) over two-thirds parliamentary majority.  Although the election was peaceful, the electoral process had major flaws, including highly partisan statements by the leadership of the security forces, restrictions on and intimidation of journalists and civil society activists, and a skewed voter registration process.

The opposition party, Movement for Democratic Change (MDC), and key international actors including the United Kingdom, the United States, the European Union, and Australia criticized the electoral process, differing with the Southern African Development Community (SADC) and the African Union (AU), which endorsed the elections. The discord among key actors diminished international pressure to address the disputed election and help resolve Zimbabwe’s pressing human rights and governance issues, which ZANU-PF has been unwilling to seriously address.

A generally peaceful environment characterized the build-up to the holding of presidential, parliamentary, and local government elections on July 31. However, the elections were marred by widespread irregularities raised by local monitors, including reports of voter intimidation by Zimbabwe’s security forces, traditional leaders coercing villagers to vote for ZANU-PF, a high number of “ghost” or duplicate voters present on the voters’ roll, and credible reports that large numbers of people were unfairly turned away from polling stations. The Zimbabwe Electoral Commission (ZEC) failed to make available the voters’ roll to political parties in advance of elections as required by law.

State-owned media openly aligned with, and campaigned for ZANU-PF, while vilifying the MDC. State media also failed to offer equal and impartial coverage to all political parties participating in the elections.  These irregularities call into question the credibility and fairness of the election. The build-up to the elections was also marked by the failure of the former coalition government, made up of ZANU-PF and the two MDC factions, to implement needed human rights reforms.

The MDC presidential candidate, Morgan Tsvangirai, challenged in court the validity of the election in which Robert Mugabe won the presidential vote with his ZANU-PF party winning over two thirds of the parliamentary vote. When the court refused to compel ZEC to provide material that could be used to electoral malpractices and irregularities, Tsvangirai withdrew his court petition paving the way for Mugabe to be sworn as president on August 22.

Under the new constitution, political parties are able to propagate their views and canvass for support, free of harassment and intimidation. It enshrines respect for the rule of law, and commits the government to fully implement and realize the rights to freedom of association, assembly, expression, and information.

While the establishment of an independent and credible human rights commission is set out in the new constitution, there are significant concerns with the commission. The law establishing the commission states that it can only investigate alleged human rights abuses since February 2009. This prevents the commission from investigating previous serious crimes, including election-related violence in 2002, 2005, and 2008; the massacre of an estimated 20,000 people in the Matebeleland and Midlands provinces in the 1980s; and the government-led mass demolitions of homes and evictions of 2005. At time of writing, the human rights commission had no substantive chairperson, lacked sufficient resources, and had no support staff.

Although the new constitution obligates the security forces to be politically neutral and impartial, this constitutional requirement has been disregarded. Beyond the open endorsement of ZANU-PF, in advance of the 2013 elections,  security forces intimidated, beat, and committed other abuses against Zimbabweans perceived to be supporting the MDC or critical of the government. Members of the security forces have committed these abuses with almost absolute impunity.

Both the power-sharing government prior to August 2013 and the new administration have failed to amend repressive laws, such as the Access to Information and Protection of Privacy Act (AIPPA), the Public Order and Security Act (POSA), and the Criminal Law Codification and Reform Act, which severely curtail basic rights through vague defamation clauses and draconian penalties. Failure to amend or repeal these laws and to address the partisan conduct of the police severely limits the rights to freedom of association and assembly.

Sections of AIPPA and POSA that provide criminal penalties for defamation, or for undermining the authority of, or insulting the president, have routinely been used against journalists and human rights defenders. Police often misuse provisions of POSA to ban lawful public meetings and gatherings. Activists and journalists continue to be wrongly prosecuted and charged under these laws. For instance, on May 7, police arrested Dumisani Muleya, editor of the Zimbabwe Independent, and Owen Gagare, its chief reporter, following the publication of an article on the security forces. The two were detained for eight hours, then charged with “publishing or communicating false statements prejudicial to the State.”

Attacks against lesbian, gay, bisexual, and transgender (LGBT) individuals and rights activists continue to emanate from the highest level of government. During his election campaign in July, President Mugabe (who has a long history of making homophobic statements) reiterated that LGBT citizens are “worse than dogs and pigs,” and threatened to behead them. The new constitution does not explicitly recognize LGBT rights, and in his inauguration speech on August 22, Mugabe attacked same-sex marriage, which the new constitution prohibits, saying it was a “filthy, filthy, filthy disease.”

These attacks on LGBT people, arbitrary arrests of LGBT activists by the police, and the harassment by state agents of the Gays and Lesbian of Zimbabwe (GALZ) nongovernmental organization in previous years, have driven many LGBT people underground.

A campaign of politically motivated abuses against civil society by the police began in December 2012 under the coalition government, and continues under the new administration. Police repeatedly arrested members of Women of Zimbabwe Arise as they peacefully protested human rights violations and the economic situation.

Other attacks included the arbitrary arrest on March 17 and eight-day detention of human rights lawyer Beatrice Mtetwa, on charges of obstructing justice despite a High Court order for her release. In the lead-up to the July elections, police charged a number of civil society leaders, including Jestina Mukoko, director of the Zimbabwe Peace Project, Okay Machisa, director of Zimbabwe Human Rights Association, and Abel Chikomo, director of Zimbabwe Human Rights NGO Forum, with alleged violations of various laws under what appeared to be politically motivated attempts to curtail the human rights work of civil society organizations.

Chikomo was required to report to the Harare police station on numerous occasions throughout the year and was eventually summoned to stand trial on August 1.  At time of writing, Chikomo and Mtetwa’s trials were ongoing.

Through its facilitation team, South Africa, appointed by SADC as mediator in Zimbabwe’s political negotiations, strongly pushed for key reforms ahead of elections. However, South Africa eventually succumbed to pressure from Mugabe and ZANU-PF to stop raising concerns about electoral and human rights conditions ahead of the elections. ZANU-PF directed particularly venomous attacks at Ambassador Lindiwe Zulu, a vocal member of the Facilitation Team.  Initially, South Africa did not comment on the elections, but eventually made an about-turn and congratulated Zimbabwe on holding “successful elections,” while refraining from commenting on the credibility or fairness of the elections and the lack of the key reforms it had been pushing for.

SADC also failed to press Mugabe and ZANU-PF to implement key human rights and institutional reforms ahead of the elections, as its recommendations were repeatedly ignored by ZANU-PF.  Subsequently, SADC and the AU endorsed the July elections, describing them as “free, peaceful, and generally credible,” ignoring widespread electoral flaws that violated SADC’s elections standards. Regional endorsement has emboldened the government of Zimbabwe to ignore pressing human rights and governance concerns.

The European Union welcomed the generally peaceful and orderly manner in which the elections were conducted but raised concerns about “alleged irregularities and reports of incomplete participation, as well as the identified weaknesses in the electoral process and a lack of transparency.” Similarly the UK commended Zimbabwe on holding peaceful elections while expressing “grave concerns over the conduct of the election.” The US said the Zimbabwe election was deeply flawed, while Australia called for a rerun of the election.

The ability of key international actors to apply pressure on Zimbabwe for a resolution of the election dispute, and for improvements in human rights and governance, was largely nullified by SADC and the AU’s endorsement of the July elections. On Zimbabwe, the EU, the UK, and the US had previously deferred to SADC and the AU, whose response to the flawed July elections weakened international efforts to ensure restoration of the rule of law and respect for human rights.