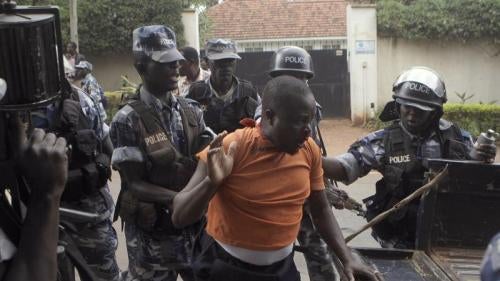 After 27 years in office, President Yoweri Museveni’s government increasingly suppresses freedom of assembly, expression, and association while escalating threats to civil society.  Two media houses faced temporary closure in 2013 for publishing articles suggesting that Museveni is grooming his son to take over the presidency. Debate around presidential succession, accountability of public resources, governance, and other politically sensitive topics is increasingly constrained. Activists who provide public information about government expenditure and corruption are obstructed from demonstrating and sometimes face criminal charges such as inciting violence, while opposition politicians are regularly prevented from holding public rallies.

Freedom of Assembly and Expression
After two years of sporadic debate, Parliament passed the Public Order Management bill in August 2013 and the president assented shortly after, further restricting space for dissent and public critiques of governance. The controversial bill was considerably amended just before passage, but it remains vague, making it open to abusive application. The law still grants police wide discretionary powers to permit or disallow public meetings.

Throughout the year opposition politicians faced arrest, detention, and criminal charges for holding public assemblies in Uganda. In July, seven opposition politicians were charged in a Kampala court for belonging to and managing an “unlawful society,” Activists for Change (A4C), a political pressure group the government had banned in 2012 on spurious grounds. Earlier, in February, 15 people, including the mayor of Kampala and then-opposition leader Kizza Besigye, were charged with organizing an unlawful assembly. Both cases were pending at time of writing.

The government continues to be hostile to independent media publishing politically sensitive articles. On May 7, the Daily Monitor newspaper detailed an alleged conspiracy to frame or eliminate high-ranking members of the government who do not support the plan for Museveni’s son to take over when his father steps down. On May 20, more than 50 uniformed police sealed off the Daily Monitor’s premises after it published a letter allegedly written by Uganda’s coordinator of intelligence service, Gen. David Sejjusa. Two radio stations located in the same compound were also forced off air by the Uganda Communications Commission. The same day, police closed the Red Pepper, another newspaper, on similar grounds. Three days later, the court withdrew the search warrant but police defied the orders and increased their presence. Two journalists and eight civil society members protesting the closures were arrested, beaten, and detained by police. They were charged with inciting violence before being released. The newspapers and radio stations were opened 10 days later when the minister of internal affairs ordered the police to vacate the premises. The charges were still pending at time of writing.

Corruption
Corruption in Uganda remains pervasive at both low and high levels of public administration. Bribery, nepotism, and misuse of official positions and resources are widespread in spite of continuous assurances from the president that corruption will be eradicated. Major corruption scandals have surfaced repeatedly in the last few years, though no high-ranking officials have served prison sentences for corruption-related offences. Scandals have rocked the health services, particularly regarding the misuse of funds intended for the provision of immunizations and essential medicines to fight HIV, tuberculosis, and malaria.

The embezzlement in 2012 of US$12.7 million in donor funds from the Office of the Prime Minister, which was designated for the rehabilitation of the war-ravaged areas of northern Uganda, led donors to withdraw their budget support in February. Donors, who fund about 25 percent of Uganda’s budget, demanded repayment when the auditor general discovered the misappropriation of the funds. The principal accountant in the Prime Minister’s Office was convicted of abuse of office and forgery, but other officials implicated in the scandal were never charged.

Police have silenced and obstructed activists working to raise corruption issues and educate citizens about public sector accountability. Members of 50 civil society groups have come together in solidarity and wear black every Monday to raise awareness of corruption issues. Known as the Black Monday Movement, the campaign publishes and distributes monthly newsletters that highlight the impact of corruption on various sectors, such as education and health, and protests the impunity that government officials enjoy.

In the first 10 months of 2013, police arrested and charged at least 28 individuals handing out Black Monday materials. Nineteen were charged with inciting violence; five with possession of prohibited publications; and three with spreading harmful propaganda. Most of the 28 were stopped from distributing Black Monday materials and were detained for between three and ten hours by police before being released without charge.

Illegal Arrest and Detention
The Ugandan government continues to grapple with the Allied Democratic Forces (ADF) rebels based in the Democratic Republic of Congo (DRC), a group composed predominantly of Ugandan Muslims of the Salaf sect. In 2013, Human Rights Watch documented over two dozen cases of illegal arrest and detention of Salaf Muslims. Those arrested were detained for between one week and four months, often moved to various detention locations, then released without charge or brought before a court. Family members often could not identify where their relatives had been detained, and police often denied knowledge of the arrests.

Accountability for Past Abuses
In 2009 and 2011, police and military police killed at least 49 people, but police have not conducted serious or meaningful investigations into these killings. Relatives continue to search for justice through civil cases against the government. The Uganda Human Rights Commission ordered compensation for two families for the deaths of their children at the hands of security forces, but the money was never paid. In December 2011, police disbanded its Rapid Response Unit but there have been no investigations into the killings or torture by officers in the unit. Similarly, no inquiries have been made by the Ugandan army into cases of people who were tortured or died in the custody of the Joint Anti-Terrorism Task Force (JATT).

The Lord’s Resistance Army
The Ugandan rebel group the Lord's Resistance Army (LRA) was active across the Central African Republic, southern Sudan, and northern Democratic Republic of Congo (DRC), with allegations of killings and abductions, though on a much lesser scale than previous years.

Warrants issued in 2005 by the International Criminal Court (ICC) for LRA leaders remain outstanding. Former LRA fighter Thomas Kwoyelo, charged with willful killing, taking hostages, and extensive destruction of property, has been imprisoned in Uganda since March 2009 but his trial has not begun. The Supreme Court has not yet heard the state’s 2012 appeal of the High Court ruling ordering Kwoyelo to be granted amnesty and released.

In May, Uganda’s parliament reinstated legislation for another two years granting amnesty to members of armed groups who surrender, though those wanted on ICC warrants were explicitly not eligible. Sections of the Amnesty Act had been allowed to lapse in May 2012, and through the new extension of the powers of the Amnesty Commission, those who were not eligible during the interim period now will now in theory qualify for amnesty.

Bills Violating Human Rights Law
The Anti-Homosexuality Bill, which proposes the death penalty for some consensual same-sex activities, and the HIV/AIDS Prevention and Control Act, which criminalizes intentional or attempted transmission of HIV, are before parliamentary committees and could still be tabled for debate and vote at any time. Both have been pending since 2009.

Key International Actors
Following the October 2012 US$12.7 million corruption scandal in the Office of the Prime Minister, the governments of Denmark, Ireland, Norway, Sweden, and the United Kingdom suspended budget support. Donors reported that the government needed to take action to restore confidence before financial support would resume. The World Bank suspended the ninth Poverty Reduction Support Credit in December 2012 but eventually released it in June 2013. While the bank will not proceed with the tenth, it indicated it is open to using budget support in exceptional cases to support governance or sectoral reforms. Since then, most have turned to project support and reduced or stopped direct budget support. For international development assistance to address corruption, Uganda’s donors should significantly increase the focus on accountability at the highest levels of government, and ensure that any reengagement is based on substantive changes to Uganda’s anti-corruption structures. External donors should also actively and vocally support civil society working to document and raise awareness of corruption, by both financially supporting their work and publicly denouncing arrests and harassment of activists.

International bilateral donors continue to press the government to respect lesbian, gay, bisexual, transgender, and intersex (LGBTI) rights including pushing police leadership to meet with LGBTI activists and improve communication and response to threats to members of the LGBTI community.

In contrast, there continues to be minimal criticism of security force conduct, such as the killings during protests in 2009 and 2011 and past and current torture cases. The army continues to receive logistical support and training from the US for counterterrorism, its leading role in the African Union Mission in Somalia (AMISOM), and counter-LRA operations in the Central African Republic (CAR).