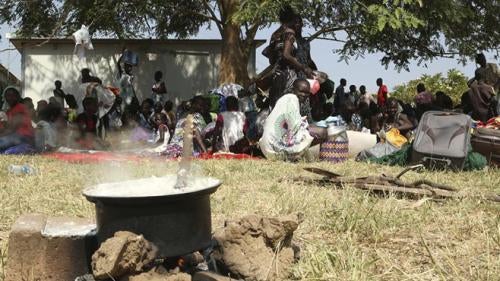 South Sudan’s second year as an independent nation was marked by political and economic uncertainty, violence in the eastern state of Jonglei, and ongoing repression of civil and political rights.

South Sudan and Sudan signed a series of agreements to resolve various outstanding issues in September 2012, but the relations between the two governments remain tense. Southern oil began flowing again through Sudan in April after a 2012 shutdown by South Sudan, but in June Khartoum threatened to stop transportation, accusing Juba of supporting rebels in its territory.

In July, President Salva Kiir dismissed his entire cabinet and appointed a new vice president and 21 new ministers, downsizing the cabinet from 28 ministries. In Jonglei state, an abusive government anti-insurgency operation against a rebel group in the area worsened brutal ethnic violence in 2013.

The South Sudan Legislative Assembly (SSLA) passed three media bills in July, including a Right of Access to Information bill, more than six years after the bills were drafted. President Kiir had yet to sign the bills into law at time of writing. Journalists hope the legislation will reduce unlawful arrests and harassment of media workers, including by officers from the National Security Service (NSS) who continue to operate without legal authority.

Kiir’s cabinet endorsed the ratification of seven core international human rights instruments in early 2013, including the International Covenant on Civil and Political Rights. The SSLA ratified the African Charter on Human and Peoples’ Rights and the AU Convention Governing Specific Aspects of Refugee Problems in Africa, the UN Convention Against Torture and Other Cruel, Inhuman or Degrading Treatment or Punishment and the Convention on the Rights of the Child in late 2013, but others were still pending approval at time of writing.

South Sudan’s first elections since independence are due in 2015, but preparations have lagged. The mandate of the National Constitution Review Commission, tasked with conducting broad consultation ahead of drafting a new constitution by January 9, 2013, was extended to December 31, 2014. At time of writing, President Kiir had not sworn in members of the political parties’ council, delaying registration and re-registration of all political parties, required under the 2012 Political Parties Act. Parties cannot conduct any political work or other activities until registered.

Weaknesses in the justice system give rise to human rights violations, including prolonged periods of pretrial detention, lack of defense counsel, and poor detention conditions. Although South Sudan voted in favor of the UN General Assembly moratorium on the use of the death penalty in December 2012, at least four people were reported to have been executed in November.

South Sudan’s laws on marriage, separation, divorce, and related matters requires urgent reform, as almost half of South Sudanese girls between 15 and 19 are married, some as young as 12. South Sudan has no legislation that clearly sets 18 as the minimum age of marriage. Lack of a national plan of action that sets out comprehensive strategies to address child marriage has undermined efforts to curb the practice. Marital rape is also still not recognized as a criminal offense.

Conflict between South Sudan’s army and a rebel group largely drawing support from the Murle ethnic group continued in 2013. Inter-ethnic conflict has intensified in recent years in Jonglei, with thousands killed.

The government is conducting the anti-insurgency operation amid intense inter-ethnic fighting between Lou Nuer, Murle, and Dinka groups, often provoked by cattle raids and other attacks. The government has repeatedly failed to protect communities from these clashes or arrest or prosecute those responsible.

In revenge for Murle attacks on Lou Nuer in 2012 and in February 2013 in which at least 85 people were killed, thousands of armed Lou Nuer attacked Murle areas in July, killing over 300 Murle according to local government officials. The army did not attempt to protect Murle civilians, many of whom had fled towns to the bush because of army abuses. Credible allegations that the Lou Nuer were given ammunition by South Sudan’s army have not been fully investigated. An investigation committee established by the government in 2012 to research human rights abuses and causes of violence in Jonglei state has still not received funds to begin its work.

Soldiers detained, beat, and attacked civilians and civilian property in various locations across the country during 2013.

Citing worsening criminality including armed robbery and inter-clan attacks, the president in January replaced the elected governor of Lakes state with military strongman Matur Chuot Dhuol. Dhuol sidestepped the courts, police, and the prisons service and ordered the army to arrest and detain suspects. Soldiers rounded up dozens of men in February and March 2013, often detaining others from the same village if they could not find the suspects, and held them in military facilities in extremely harsh conditions for weeks or months and subjected many to severe beatings.

In Eastern Equatoria, soldiers reportedly killed six civilians when soldiers attacked Orema village on April 15, 2013, apparently in revenge for the killing of security forces by armed civilians during an earlier cattle raiding incident.

Soldiers continue to occupy schools, and 26 schools were occupied at some point in 2013, mostly in Jonglei and Eastern Equatoria states. On August 14, the army announced a zero tolerance policy of child recruitment or the occupation of schools.

Authorities have not fully investigated the killings of eight peaceful protesters in Wau in December 2012 by security forces or dozens of unlawful arrests of others, many from the Fertit ethnic group, who openly opposed the decision of the governor of Western Bahr el Ghazal state’s to move a county headquarters. The courts conducted trials of individuals accused of ethnically-motivated crimes and perceived government opponents on a variety of charges. None of the cases brought before the court related to the protester shootings.

In January, three NSS officers arrested a journalist at gunpoint in Juba, slapped him in the face, and held him overnight in an NSS detention center. A radio journalist and two public commentators fled South Sudan after receiving threats in early 2013, including from government officials. In May, the editor and managing editor of the Juba Monitor were arrested, detained, and subsequently released for allegedly defaming the deputy minister of the interior. A government investigation into the killing on December 5, 2012, of a well-known commentator and journalist, Isaiah Abraham, by unidentified gunmen outside his home in Juba has stalled.

Power plays within the ruling SPLM continued with Vice President Riek Machar announcing on July 4 that he will contest South Sudan’s presidency in 2015. In mid-April, President Kiir, by presidential decree, withdrew executive powers delegated to Machar and replaced him with Archbishop Daniel Deng as head of the national reconciliation process.

In a sweeping move on July 23, President Kiir fired Machar and all national ministers and undersecretaries by presidential decree. He then appointed James Wani Igga as vice president and appointed a new, smaller cabinet of ministers. Kiir also sacked Pagan Amum on the same day for insubordination, including using public media to discredit the party.

Meanwhile, South Sudan’s relations with Sudan remained tense. Both countries accused the other of supporting rebel groups in their territory. South Sudan halted oil production in February 2012 after a row between the two countries over oil transportation fees through Sudan’s territory. A September 2012 agreement paved the way for the resolution of outstanding issues including oil flows, but implementation has been troubled with both sides threatening to cut oil flow and disagreements over the status of Abyei.

The United Nations Mission in South Sudan (UNMISS) has a mandate to use force to protect civilians under imminent threat of serious harm, but its failure to intervene against a clear pattern of unlawful killings and other serious violations by South Sudan’s army in Murle areas of Pibor state has undermined public confidence in the peacekeepers.

In addition, the mission failed to publicly report on violations by security forces in Jonglei and other locations where serious abuses occurred in 2012 such as in Wau and Rumbek, reinforcing a perception that the mission values its relationship with the government over holding authorities to account for violations.

South Sudan’s army shot down an UNMISS helicopter in December 2012 in Jonglei, and peacekeepers have been attacked there several times by unknown attackers. On April 9, unknown gunmen killed five peacekeepers and seven civilian staff in Pibor county.

The mandate for the UN Interim Security Force for Abyei (UNISFA) peacekeeping force was renewed on May 29, increasing its authorized force number from 4,200 to 5,326 troops.

The United States, United Kingdom, and other western supporters of South Sudan’s government were critical of the government’s human rights record and especially violations in Jonglei state. The African Union continued to play a mediation role between Sudan and South Sudan.