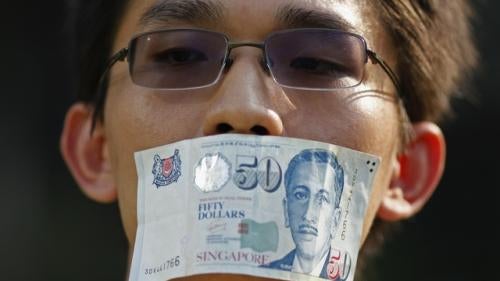 Despite controlling an overwhelming majority in Parliament, the Singapore government continues to impose wide-ranging restrictions on core civil and political rights.

On January 26, 2013, the opposition Workers Party raised its number of parliamentarians to an all-time high of eight when it defeated the ruling People’s Action Party in a by-election. Increasingly open debate in online blogs and news portals is now echoed by more open parliamentary debate, but the government still punishes speech and peaceful actions that it deems a threat to public order, especially on matters of ethnicity and religion.

The rights to freedom of expression, peaceful assembly, and association are limited in Singapore in the name of security, public order, morality, and racial and religious harmony. The restrictions are interpreted broadly.

In June, the government added restrictions on Internet news websites by requiring submission of a S$50,000 (US$39,430) bond and annual licensing for any website averaging at least one Singapore-related news article a week, and receiving a monthly average of 50,000 unique visits from Singapore-based users. Sites determined by the Media Development Authority (MDA) to meet the criteria must, on notification, remove “prohibited content” or face forfeiture of their bond. Any content in the article, or associated readers’ comments, which the MDA decides violates broadly defined conceptions of public interest, public security, or national harmony can trigger a take-down order that requires sites to remove the content within 24 hours. Although the MDA said bloggers would not be affected, it added that "if [blogs] take on the nature of news sites, we will take a closer look and evaluate them accordingly.”

Printed materials continue to be regulated by the Newspaper and Printing Presses Act, which requires all newspapers to renew their registration annually and limits circulation of foreign newspapers which the government determines “engage in the domestic politics of Singapore.” The two corporations that dominate media regularly take a pro-government stance. Media Corp, owned by a government investment company, dominates broadcasting. Singapore Press Holdings Limited (SPH) dominates print media, and although a private company, the government controls appointment of its shareholders.

Singapore uses criminal defamation and contempt of court charges to rein in criticism of the government and the ruling People’s Action Party. In July, Leslie Chew, a cartoonist posting his work on “Demon-cratic Singapore,” his Facebook page, was charged with “scandalizing the judiciary” for four cartoons that authorities said implied the Singapore judiciary was not impartial or independent. In exchange for dropping the charges, Chew apologized, took down the cartoons and accompanying reader comments, and agreed not to “put up any post or comic strip … that amounts to contempt of court.”

Under the Public Order Act 2009, Singapore requires a permit for any cause-related assembly in any public place or to which members of the general public are invited, or any procession of two or more persons. Grounds for denial of the permit are broad and left largely to the discretion of police. They include the likelihood that the assembly would cause disorder or a “public nuisance,” lead to property damage, obstruct roads, “plac[e] the safety of any person in jeopardy,” or cause enmity between different groups in Singapore. Demonstrations and rallies are restricted to the city-state’s Speakers’ Corner, require advance notice, can only be organized by Singapore citizens, and can only be attended by citizens and permanent residents.

Associations with more than 10 members must seek approval to exist, and the Registrar of Societies has broad authority to deny registration if he determines that the group could be “prejudicial to public peace, welfare or good order.”

Yale-NUS College, a joint initiative of Yale University and the National University of Singapore, opened its doors to its first classes in August 2013. College President Pericles Lewis has said that students can express their views but will not be allowed to organize political protests on campus or form partisan political societies, thereby undermining human rights principles that are a crucial part of a liberal arts education.

Singapore authorities continue to use the Internal Security Act (ISA) and Criminal Law (Temporary Provisions), which permit arrest and detention of suspects for virtually unlimited periods of time without charge or judicial review. In September 2013, Asyrani Hussaini was ordered to serve two years in detention for attempting to take part in an armed insurgency in southern Thailand. In September, Mustafa Kamal Mohammad, a member of the Moro Islamic Liberation Front in the Philippines, was placed on a two-year Restriction Order.

In drug cases, judges now have discretion to bypass the mandatory death penalty and sentence low-level offenders to life in prison and caning in cases in which prosecutors attest that the offenders have been cooperative.

Corporal punishment is common in Singapore. Judicial caning, an inherently cruel punishment, is a mandatory additional punishment for medically fit males aged 16 to 50 who have been sentenced to prison for a range of crimes, including drug trafficking, rape, and immigration offenses. Sentencing officials may also, at their discretion, order caning in cases involving some 30 other violent and non-violent crimes.

In February, a constitutional challenge to section 377A of the penal code failed, leaving intact a statute criminalizing sexual acts between consenting adult men. The High Court dismissed the case because repeal of the law would further a societal norm that the judge claimed has yet to “gain currency.” The plaintiffs argued the law is discriminatory and violates Singapore’s constitutional equal protection guarantee. The plaintiffs appealed to the Court of Appeal, which in October decided to hear the case with another challenge to article 377A also pending at the court. A decision is expected by mid-2014. In a third case, a plaintiff has sued to seek a declaration that the constitution “prohibits discrimination against gay men on account of their sexual orientation in the course of employment.”

Prime Minster Lee Hsien Loong has spoken dismissively of the challenges to article 377A: “Why is that law on the books? Because it’s always been there and I just think we leave it. I think that’s the way Singapore will be for a long time.”

In August, in what was widely seen an affirmation of lesbian, gay, bisexual, and transgender (LGBT) rights, over 20,000 participants joined the fifth annual Pink Dot pride festival. The festival continued to attract prominent corporate sponsors, including Google, Barclays, and J.P. Morgan.

Foreign workers in Singapore, both men and women, are subject to labor abuses and exploitation through debts owed to recruitment agents, non-payment of wages, restrictions on movement, confiscation of passports, and, in some cases, physical and sexual abuse. Foreign domestic workers are still excluded from the Employment Act and key labor protections, such as limits on daily work hours. Although the government is still not in compliance with minimum standards for trafficking elimination, it has made some improvements in prevention and protection, but prosecutorial efforts have been weak. Singapore has not yet ratified the ILO Domestic Workers Convention or the UN Protocol to Prevent, Suppress and Punish Trafficking in Persons.

A government-mandated standard contract for migrant workers does not address work-related discrimination issues such as lower wages, longer work hours, and poorer living conditions.  Labor laws discriminate against foreign workers by prohibiting them from organizing and registering a union or serving as union leaders without explicit government permission.

On November 26, 2012, 171 Chinese nationals working as bus drivers for the public transport company SMRT, whose majority shareholder is the government-owned Temasek investment company, refused to report to work. They demanded that SMRT management end discrimination against migrants in pay and selection of bus routes, and improve company-provided unhygienic living quarters. The government prosecuted four work-stoppage leaders for conducting an illegal strike, sentencing them to prison for a number of weeks before deporting them. Two of the four alleged that police beat them in custody.  Another 29 drivers who participated in the strike were not charged but were deported.

In January 2013, Prime Minister Lee demanded that activist Alex Au take down a blog post and readers’ comments and apologize or face legal action. It was the third time in 11 months that Alex Au had faced such demands. In July 2012, the Attorney General’s Chambers had sent a similar demand, as did Law Minister Shanmugam in February 2012. Prosecutors issued a warning to Lynn Lee, a freelance journalist filming interviews with striking bus drivers.

Nizam Ismail resigned as a member of the Board of Directors of the Association of Muslim Professionals (AMP) and as board chairman of the Centre for Research on Malay and Islamic Affairs under pressure from two government ministers who expressed concerns to AMP about his political activities and threatened to cut government funding for AMP.

Singapore serves as a major trade and commercial hub for the region. It has concluded 18 bilateral and regional free trade agreements with 24 trading partners, including Australia, China, India, Japan, South Korea, New Zealand, the United States, and the European Union.

The US and Singapore maintain strong trade and military ties, with security cooperation continuing to grow under President Barack Obama. In April 2013, a US Navy littoral combat ship docked in Singapore, an illustration of the country’s importance in the US “pivot” to the region.  At the same time, Singapore continues to maintain a close and warm relationship with China, and remains a central player in the regional Association of Southeast Asian Nations (ASEAN) bloc.