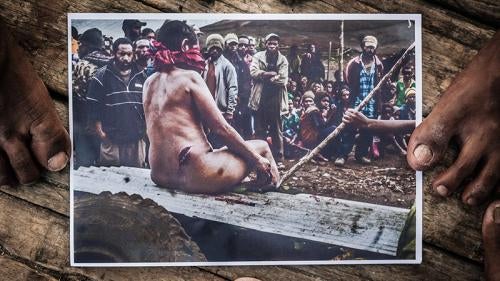 Violence against women in PNG is rampant. A series of gruesome crimes involving mob torture and murder of accused sorcerers was reported in 2013. Police violence is also common; authorities have publicly condemned specific instances of police violence, but impunity for perpetrators remains the norm.

Physical and sexual abuse of detainees—including children—by police and paramilitary police units is widespread. Two years after the UN special rapporteur on torture issued a report on PNG, the government has failed to adequately respond to his recommendations addressing police abuse and impunity.

In May, police beat and slashed the ankles of 74 men following a street brawl in Port Moresby, the capital. Two police officers were charged with unlawful wounding and five others investigated for the attack. A judge called for the prosecution of other police implicated in the incident.

Other reported incidents of police violence during the year included beatings, robberies, attempted murder, and the fatal shooting of a child. Although the official response to police violence improved in 2013, there had been no reported convictions of perpetrators in 2013 at time of writing.

Some of PNG’s notorious paramilitary police units (Mobile Squads) have been deployed to Manus Island to assist with security issues at an Australian-funded detention center for asylum seekers. In July, members of the squad beat a local man to death on the island. Five members of the squad were charged with murder.

In February, PNG Health Minister Michael Malabag reported that up to 68 percent of women in PNG have suffered violence; up to a third have been raped. In September, PNG’s parliament unanimously passed the Family Protection Bill 2013, which criminalizes domestic violence.

Accusations of sorcery are pervasive across the country and are routinely invoked to justify violence. Most victims are women. In February, a mob in Western Highlands Province accused a 20-year-old woman of being a witch and burned her to death. Two people were charged in the incident. Local media have reported that at least eight other women were victims of such attacks between February and this writing in late 2013; police reportedly were investigating the attacks.

The UN special rapporteur on violence against women, Rashida Manjoo, visited PNG in 2012 and released her report in March 2013. The report calls for the repeal of the 1971 Sorcery Act, which allows accusation of sorcery as a defense to murder. In April, a UN human rights official renewed calls for a repeal of the Sorcery Act and demanded an end to the extrajudicial killing of accused sorcerers. The PNG government repealed the Sorcery Act in May.

In a step backwards, in May the parliament expanded the scope of crimes eligible for the death penalty. Sorcery-related killings, aggravated rape, and armed robbery are now predicate crimes. The amendment signals PNG’s intention to resume executions after nearly 60 years (no executions have taken place since 1954). There are currently 10 prisoners on death row.

Corruption remains a chronic problem in PNG. In September, the trials of 31 people charged in corruption cases began following investigations by PNG’s anti-corruption task force. Also in September, task force Chairman Sam Koim estimated that 40 percent of the national budget is misappropriated each year. In November, the government introduced a bill to create an independent anti-corruption commission, a step that has been discussed for many years.

Extractive industries are an important engine of PNG’s economic growth, but have given rise to serious human rights problems and environmental harm.

In 2011, Human Rights Watch documented gang rape and other violent abuses by private security personnel at PNG’s Porgera gold mine, operated by Canadian mining giant Barrick Gold.  Along with other steps, Barrick has responded by rolling out an ambitious remediation program to compensate victims of sexual violence. That program has been dogged by controversy, but could be an important global precedent if it succeeds.

The country’s $US19 billion Liquefied Natural Gas (LNG) project, led by ExxonMobil, is reportedly on track to begin production in 2014. LNG revenues could have a transformative impact on the national economy but, without additional safeguards, could also exacerbate corruption. Violent clashes related to compensation claims marred construction for the project.

Australia is the country’s most important international partner and provided $469 million dollars in development assistance in 2012-2013.

In July, Australia announced a new agreement with PNG whereby Australia will transfer to PNG some of the asylum seekers arriving irregularly by boat in Australian waters. Under the agreement, PNG will undertake refugee status determinations and individuals determined to be refugees will be settled permanently in PNG or wait to be settled in a third country with no option to settle in Australia. PNG has agreed to withdraw its seven reservations to the 1951 Refugee Convention—including refugee rights to wage-earning employment, public education, and freedom of movement—but how and when this will take place remains unclear. At time of writing, 780 asylum seekers were detained in the Australian-funded processing center on PNG’s Manus Island.

In July, the UN High Commissioner for Refugees (UNHCR) raised concerns about PNG’s lack of capacity and expertise to determine refugee status, its mandatory and arbitrary detention of asylum seekers in substandard facilities, and likely resettlement difficulties facing non-Melanesians. The fate of LGBT asylum seekers is particularly precarious because the PNG criminal code outlaws sex “against the order of nature,” which has been interpreted to apply to consensual homosexual acts.

The Australian government pledged to send 50 unarmed police officers to PNG by the end of 2013 to act in advisory roles and help combat the surge in reported violence in the country.  This is a short-term engagement aimed at building the capacity of PNG’s police force.