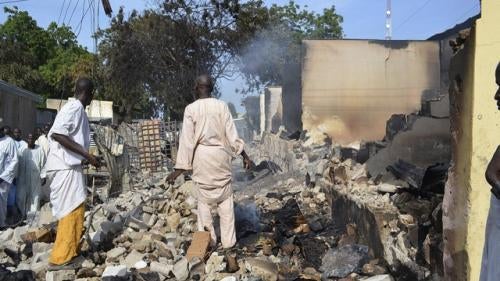 Horrific abuses in the north by the militant Islamist group Boko Haram and the Nigerian security forces’ heavy-handed response to this violence dominated Nigeria’s human rights landscape in 2013. In May, President Goodluck Jonathan imposed a state of emergency, which was extended for another three months in November in the three states where Boko Haram is most active. The emergency failed to curb atrocities and to sufficiently protect civilians. The prosecutor of the International Criminal Court said that there was reason to believe Boko Haram had committed crimes against humanity.

More than 400 people died in 2013 from violent inter-communal conflict in Nigeria’s Middle Belt states, and scores were rendered homeless from the clashes. Security forces throughout the country engaged in human rights abuses. There were few investigations or prosecutions of these crimes.

The judiciary remained nominally free from interference and pressures from other branches of government, but corruption did impede pursuit of justice. Poverty and corruption continued to afflict the oil-rich Niger Delta, while the weakness of anti-corruption institutions in government inhibited the realization of social and economic rights and the fair and transparent functioning of the public and private sectors.

The four-year insurgency by Boko Haram, which seeks to impose a harsh form of Sharia, or Islamic law, in northern Nigeria and end government corruption, has killed more than 5,000 people. Although the Nigerian government set up a committee to develop an amnesty framework for Boko Haram, the group continued to target government security agents, churches, and mosques.

Since 2012, Boko Haram has burned more than 300 schools in the north and deprived more than 10,000 children of an education. In a particularly gory attack in July, suspected armed Islamists killed 42 pupils and teachers and burned down a government-owned boarding school in Mamudo village, Yobe state.

The Nigerian government’s support for the formation of armed self-defense groups, mostly young men to assist in the apprehension of Islamist insurgents, brought a new and alarming dimension to its anti-Boko Haram efforts. These young men themselves became targets of Boko Haram attacks. In one August incident in Borno state, Boko Haram killed 24 members of the “Civilian Joint Task Force,” as the group is called. Thirty other members were declared missing.

Episodes of inter-communal violence in the Middle Belt states of Plateau, Taraba, Benue, and Nasarawa left more than 400 people dead and scores of houses destroyed. Federal and state authorities failed to hold accountable the perpetrators of these crimes and break the cycle of violence. In response, ethnic and religious groups in this region resorted to forming their own militias to deliver justice and security. State and local government policies fed discontent by discriminating against “non-indigenes”—people who cannot prove that they are descendants of the original inhabitants of an area.

Government security forces were implicated in various human rights violations with regard to the Boko Haram insurgency. The large number of troops deployed to enforce the state of emergency engaged in the indiscriminate arrest, detention, torture, and extra-judicial killing of those suspected to be supporters or members of the Islamist group. Security forces razed and burned homes and properties in communities thought to harbor Boko Haram fighters. In Baga, a town in Borno state, Nigerian troops destroyed more than 2,000 buildings and allegedly killed scores of people, apparently in retaliation for the killing of a soldier by Boko Haram. The authorities have yet to bring anyone to justice for these crimes.

The Nigerian police have also been involved in frequent human rights violations, including extrajudicial killings, torture, arbitrary arrests, and extortion-related abuses. Despite the dismantling of many “road blocks” by the inspector general of police, corruption in the police force remains a serious problem. The police routinely solicit bribes from victims to investigate crimes and from suspects to drop investigations. Senior police officials embezzle or mismanage police funds, often demanding monetary “returns” that their subordinates extort from the public.

The Economic and Financial Crimes Commission (EFCC) made little progress combating corruption in the public sector. In a major setback in ending impunity for corruption among political officeholders, President Goodluck Jonathan in March 2013 “pardoned” Diepreye Alamieyeseigha, a former governor of Bayelsa State, and the only governor to have served prison time in Nigeria for corruption.

Corruption cases against several dozen senior politicians, as well as oil marketers for their alleged role in a fraudulent fuel subsidy scheme, had still not been completed at time of writing. Executive interference with the EFCC, a weak and overburdened judiciary, and the agency’s own missteps, including failing to appeal tenuous rulings or prosecute senior politicians credibly implicated in corruption, have continued to undermine its efficacy.

The country’s other prominent anti-corruption agency, the Independent Corrupt Practices and Other Related Offences Commission (ICPC), established in 2000 to tackle corruption in the public sector, failed to file charges or achieve any major convictions in 2013.

Violence and Poverty in the Oil-Producing Niger Delta

The federal government’s 2009 amnesty program—which saw some 26,000 militants, youth, and gang members surrender weapons in exchange for amnesty and monthly cash stipends—have reduced attacks on oil facilities in the Niger Delta. The government has doled out these financial incentives—some US$400 million annually—from the additional oil revenue accruing to government following the amnesty, but has still not addressed the region’s underlying causes of violence and discontent, such as poverty, public sector corruption, environmental degradation from oil spills, and impunity for politically sponsored violence. In June, the government announced 2015 as the terminal date for the program and acknowledged that its inability to secure jobs for the trained ex-militants or implement an orderly exit strategy may portend more danger for the region.

Widespread lead poisoning from artisanal gold mining in Zamfara State has killed at least 400 children since 2010. The release of funds in February by the federal government to clean up the environment allowed lead treatment programs to be expanded to reach an additional 1,500 children.

In February, nine female polio vaccinators were shot dead by suspected Islamic militants in Kano, and security for vaccinators remains fragile in the north. Attacks on health workers threaten the realization of the right to health.

In May 2013, Nigeria’s House of Representatives passed the Same Sex Marriage (Prohibition) Bill, earlier passed by the Senate in November 2012, and at time of writing the bill was awaiting the president’s approval. Same-sex marriages or civil unions, which could lead to imprisonment of up to 14 years, are so broadly defined in the bill that they include virtually any form of same-sex cohabitation. In addition, the bill seeks to impose prison sentences on lesbian, gay, bisexual, transgender, and intersex (LGBTI) people.

Human rights groups vocally opposed the bill because it would formalize discrimination against LGBTI people and have wide-ranging effects on the constitutionally guaranteed rights to dignity, personal liberty, freedom of speech, association and assembly, and freedoms of thought, conscience, and religion.

In July, Nigeria's Foreign Ministry announced that the country would not accredit diplomats with same-sex spouses, confirming that, if the law comes into effect, the country would extend to non-citizens its legal ban on LGBTI relationships.

Civil society and the independent media openly criticize the government and its policies, allowing for robust public debate. Yet journalists are still subject to arrest and intimidation when reporting on issues implicating Nigeria’s political and economic elite. In August, the federal government arrested and charged the political editor and political reporter of Leadership newspaper, Tony Amokeodo and Chibuzor Ukaibe, respectively, for reporting on a story based on documents allegedly issued by the president. In September, Tukur Mamu, the publisher of Desert Herald, was arrested and detained allegedly for publishing a book criticizing the Minister of the Federal Capital Territory.

In January, Ikechukwu Udendu, the editor of Anambra News, a monthly newspaper in southeastern Anambra state, was gunned down in Onitsha. In September, the mutilated body of Aisha Usman, a reporter with the news magazine Mahangar Arewa in Zaria, was found on a highway in Kaduna state. The causes of these deaths remained unknown at time of writing.

Nigeria’s roles as a regional power, Africa’s leading oil exporter, and a major contributor of troops to United Nations peacekeeping missions have made foreign governments reluctant to exert meaningful pressure on the country over its disappointing human rights record.

The British government in July designated Boko Haram as a foreign terrorist organization, aimed at preventing it from operating in the UK and blocking British-based support for the group. The UK continues to provide substantial foreign aid to Nigeria, including security sector assistance. It has not, however, openly demanded accountability for government officials or security force members implicated in corruption or serious human rights abuses.

The US government in November designated Boko Haram and its affiliate, Ansaru, as foreign terrorist organizations. The United States in 2013 restricted a Nigerian army battalion operating in Mali as part of an African force from receiving non-lethal equipment under a foreign aid law, which bars the US from providing training or equipment to foreign troops or units that commit gross human rights violations.

United Nations High Commissioner for Human Rights Navi Pillay consistently warned that Boko Haram’s attacks might constitute crimes against humanity. The International Criminal Court continued its “preliminary examination” of the situation in Nigeria, with a focus on assessing the gravity of crimes committed and the extent to which national authorities are investigating and prosecuting them.