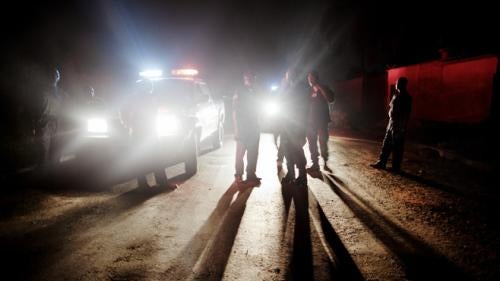 Longstanding deficiencies within the judicial system and security sector, as well as insufficient efforts to address official corruption, continue to undermine development and human rights in Liberia.

Ten years after the signing of a peace accord that ended over a decade of armed conflict, Liberians and the country’s key international partners increased pressure on President Ellen Johnson Sirleaf’s government to expedite reforms.

While President Sirleaf dismissed a number of high-ranking government officials accused of corruption, her government, as in past years, failed to pursue investigations into the alleged crimes, thereby undermining accountability efforts.

Widespread police indiscipline and corruption continue to compromise equal and impartial justice and the establishment of the rule of law. Liberian police officers routinely demand bribes and participate in extortion schemes. Members of two armed units—the Emergency Response Unit and the Police Support Unit—regularly engage in armed robbery and other criminal acts during patrols.

Police officers operate with serious logistics shortages, including a lack of vehicles, fuel, uniforms, and basic tools to carry out their duties.

The police made some effort to address the abuse, notably through the Professional Standards Division (PSD), which receives and processes public and internal complaints against officers. From January to June, the PSD received 299 cases, investigated 96, and acted upon 80. Despite this progress, many Liberians are still unaware of the unit and its work.

Persistent weaknesses in the judiciary undermined access to justice and due process. Prolonged pretrial detention is prevalent; fair and speedy trials are rare. The judiciary is able to conclude only a small number of cases every year. Poor management of the judiciary and corrupt practices by judges, jurors, ministry administrators, and others also severely undermine the dispensation of justice.

An estimated 80 percent of detainees are subjected to extended pretrial detention as a result of the understaffing of the courts, inadequate funding for the judiciary, and lack of coordination between the police and the courts. But greater attention by both the government and donors led to some improvements in this sector. Liberian officials, with external support, created a regional hub system, which is intended to decentralize the security and justice sectors by placing armed police officers, immigration units, and judges in five regional centers outside of Monrovia. The first hub opened in Gbarnga, the capital city of Bong County, in 2013.

Sexual violence against women and girls is rampant. Hundreds of cases were reported to and documented by the Ministry of Gender and Development. The number of successful sexual violence prosecutions remains low due to poor evidence gathering, the reluctance of witnesses to testify, and deficiencies in the judicial sector. In large part because of these problems, the establishment in 2008 of Criminal Court ‘E,’ a special court designed to fast-track cases of sexual violence, has resulted in few prosecutions.

Truth and Reconciliation Commission and Accountability

The government made some progress in implementing the recommendations the Truth and Reconciliation Commission has made since 2009. In June, the government released a plan for promoting national peacebuilding and reconciliation, and in October launched the National Palava Hut Program, envisioned to foster reconciliation through community and grassroots dialogue. The plan advocates for reparations, but ignores the commission’s call for prosecutions of those responsible for war crimes committed during Liberia’s two armed conflicts, for which there has still been no accountability.

Numerous members of the lesbian, gay, bisexual, and transgender (LGBT) community were, in 2013, subjected to verbal assaults, harassment, and stigmatization. Although Liberian law already criminalizes same-sex conduct for both men and women, the country’s legislature has been considering even more repressive legislation. In February 2012, Liberia, like some other African countries, sought to pass new laws that would further punish LGBT people. At time of writing, there were two new bills pending before the legislature that, if passed, would increase penalties for same-sex conduct and explicitly criminalize same-sex marriage.

In July 2012, Liberia’s upper legislative house, the Senate, passed the Amendment to the Domestic Relations Law of Liberia bill, commonly known as the “Anti-Same-Sex Marriage” bill. The proposed legislation criminalizes same-sex marriage with punishment of up to five years in prison.

At time of writing, another bill that seeks to criminalize same-sex practices was before the Judiciary Committee of the House of Representatives.

There has been some improvement in the protection of freedom of expression, as evidenced by the creation of a number of independent media establishments and the passage of a Freedom of Information Act into law.

Despite these gains, Liberia’s outdated and draconian defamation laws continue to pose a serious risk to freedom of expression. The August 2013 arrest and imprisonment for several weeks of editor Rodney Sieh, and the temporary closure of his prominent investigative paper, FrontPage Africa, raised concerns about the freedom of media to publish articles critical of government. Chris Toe, a former government minister, won the libel case he brought against Sieh and FrontPage Africa. The court ordered the defendants to pay Toe a judgment of US$1.5 million. Under Liberian civil procedure law, a defendant can be imprisoned for inability to pay a libel judgment. Sieh potentially faces a long prison sentence.

There are few protections in Liberian law to ensure that defamation judgments are not excessive. Furthermore, Liberia’s appeals process—including the use of disproportionate appeals bonds—effectively denies media centers and journalists the right to appeal a defamation ruling.

The Liberia Anti-Corruption Commission (LACC), which is empowered to investigate and prosecute on its own initiative, has secured only two convictions since it was established in 2008. The second conviction occurred in 2013 against former Liberia National Police Inspector General Beatrice Munah-Sieh. The conviction was appealed on the basis of jury errors. At time of writing, the case was pending before the Supreme Court. In June, the Senate rejected a bill submitted by President Sirleaf to give the LACC more freedom to prosecute corruption cases. Currently, the LACC must submit its cases to the Ministry of Justice and wait three months for the ministry to decide whether it will pursue its own case.

The General Auditing Commission (GAC), Liberia’s independent auditing agency, has completed and issued dozens of reports in the last five years with details of mismanagement and corruption. The Ministry of Justice has investigated or pursued very few of these reports, but it announced in September 2013 it was reviewing past GAC reports for possible prosecution of government malfeasance. That same month, the Senate began to hold public hearings on past GAC audits.

The Independent National Commission on Human Rights, established in 2010 and empowered to investigate and consider human rights complaints, remains ineffective and weak. While there was some progress—the commission dispatched its first field monitors to Nimba, Bong, and Lofa—the commission has yet to take meaningful steps toward fulfilling its mandate.

Liberia’s international partners, including the United Nations Mission in Liberia (UNMIL), the United States, and the European Union were more outspoken in 2013 than in past years about the need to address corruption and weaknesses in the security and justice sectors.

The UN Security Council extended the mandate of UNMIL until September 30, 2014. UNMIL began its plan to decrease the number of peacekeepers by half—from over 8,000 to 3,750—between 2013 and 2015.  In recognition of the lack of readiness of the Liberia National Police to fully take over security, the UN secretary-general decided to increase the number of UN police officers.  The UN Peacebuilding Support Office contributed $13 million to strengthen the rule of law, notably by supporting the regional hub system.