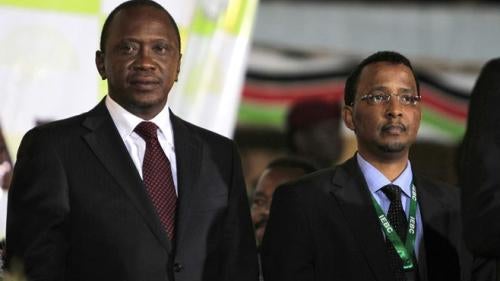 Kenya’s closely contested presidential election in March resulted in the election of President Uhuru Kenyatta and Deputy President William Ruto, after the Supreme Court rejected an opposition challenge. Both Kenyatta and Ruto face crimes against humanity charges at the International Criminal Court (ICC) for their alleged roles in post-election violence in 2007-2008.

Fears that the 2013 election would spark a repeat of the widespread violence of 2007-2008 did not materialize, but the run-up to the elections was marred by pockets of ethnic and political violence, and police used excessive force to disperse protests in Kisumu.

The slow pace of police reform, the lack of accountability for security force abuses—including extrajudicial killings, torture, and other human rights violations by the police— and the government’s failure to hold accountable perpetrators of the 2007–2008 post-election violence remain key concerns.

The September 21 attack on Nairobi’s Westgate mall killed at least 67 people and highlighted the security threat posed by the militant Islamist Somali group Al-Shabaab both within Somalia and in Kenya, which hosts an estimated 500,000 Somali refugees. The Somali refugee community has frequently been subjected to discrimination and reprisals in the wake of attacks in Kenya, including a brutal police operation from November 2012 to January 2013 in Nairobi’s Eastleigh neighborhood. The community did not immediately report reprisals following the attack on Westgate mall, but there were reports of arbitrary arrests and extortion by the police in the Eastleigharea of Nairobi in October and November.

Lack of Accountability and the ICC
President Kenyatta, his deputy Ruto, and former radio journalist Joshua arap Sang are facing charges of crimes against humanity at the International Criminal Court (ICC) for their alleged roles in the 2007-2008 post-election violence. Ruto and Sang’s trial began in September, while Kenyatta’s trial is now expected to start in February 2014.

Kenya pledged to continue cooperating with the ICC, but since the election, the new government has actively campaigned at the United Nations and the African Union (AU) to have the cases dropped, deferred, or referred to a local justice mechanism. In September, the National Assembly and the Senate approved a motion calling on the Kenyan government to withdraw from the Rome Statute, the treaty establishing the ICC, which Kenya signed in 2005. The government has taken no steps to act on that motion, and any prospective withdrawal from the Rome Statute would not affect the ongoing cases at the ICC.

The ICC intervened in 2010 and summoned six people alleged to bear the greatest responsibility after parliament defeated a bill that would have established a domestic tribunal to try those responsible for the violence in 2007-2008. In 2012, a committee appointed by the director of public prosecutions said there was insufficient evidence in the 5,000 files it had reviewed, to proceed with criminal prosecutions.

In 2012, the chief justice announced plans to set up an International Crimes Division to deal with post-election violence and other related cases in the future, but the Judicial Service Commission is still assessing the modalities of setting up the division.

The ICC cases in Kenya have been marred by withdrawals of prosecution witnesses, allegedly because of bribery and intimidation; the defendants have also alleged evidence tampering or intimidation of witnesses. The ICC prosecutor described the level of witness tampering in the Kenyan cases as “unprecedented.”

Extrajudicial Killings, Torture, and Other Abuses by Security Forces
Over the past five years police have been responsible for hundreds of extrajudicial killings but the perpetrators have not been prosecuted due to weak internal accountability mechanism and nascent civilian oversight.

A survey by the Kenya National Commission on Human Rights found that police had unlawfully killed 120 people between May and August 2013 under circumstances that could have been avoided, and that police did not report the killings to the civilian oversight authority, the Independent Police Oversight Authority (IPOA), for investigation as required under the law.

Police have also been implicated in the torture, disappearance, and unlawful killing of alleged terrorism suspects and individuals of Somali origin, and Somali refugees in Mombasa, Nairobi, North Eastern region, and other parts of Kenya.

In August 2012, a Muslim cleric, Sheikh Aboud Rogo, whom Kenyan authorities said they were investigating over links with terror networks in Somalia, was shot dead by unknown people. Kenya police have denied allegations that they were responsible for Aboud Rogo’s death. In September 2013, a Multi-Agency Task Force appointed by the director of public prosecutions in 2012 to investigate Aboud Rogo’s killing said in its report that it did not get adequate evidence to identify the killers and recommended a public inquest. No police officer has been held accountable for any of the crimes.

Reforms and Implementation of the 2010 Constitution
The 2010 constitution provides the framework for institutional reforms to improve governance, accountability, and protection of human rights. Although reforms to the judiciary, the electoral system, and parliament have proceeded as outlined in the constitution, police reforms—including measures to improve accountability for police abuses—have lagged.

Key civilian oversight bodies, such as the National Police Service Commission and Independent Police Oversight Authority (IPOA), have been established, but important measures such as restructuring of the police service and vetting of officers—a process to remove those implicated in human rights violations from the police force—have been delayed for over a year due largely to resistance from senior officers.

Efforts to restructure the Ethics and Anti-Corruption Commission (EACC) dragged in the face of allegations that the commission’s chair, Mumo Matemu, was implicated in suspected corruption at his previous post at the Kenya Revenue Authority. The restructuring is essential for investigations and important accountability measures against those suspected of corruption to proceed.

Treatment of Refugees
Following a series of grenade attacks in Nairobi’s Eastleigh neighborhood in November 2012, police responded with widespread abuses, including torture, rape, and beatings of at least 1,000 people, mainly Somali refugees, as well as significant extortion and looting during subsequent police operation in Eastleigh. While several police units were involved, the paramilitary General Service Unit (GSU) was responsible for many of the worst abuses.

Police responded with similar abuses against residents of the surrounding villages following a grenade attack in Mandera in September 2012 and a gun attack in Garissa in October 2012.

The Kenyan government also increased its hostile rhetoric against Somali refugees in 2013, calling for the refugee camps to be closed and for Somalis to return to Somalia, despite the ongoing conflict and insecurity in Somalia.

Civil Society and Human Rights Defenders
Civil society has come under increased pressure for advocating for justice for the 2007-2008 post-election violence. During their election campaigns, Kenyatta and Ruto accused civil society of manufacturing evidence against them and coaching witnesses in the ICC cases; of receiving foreign funds and furthering foreign interests; and of preventing the ICC cases from being tried in Kenya or Tanzania.

In August 2013, Kenyan security officers in Moyale killed Hassan Guyo, a 40-year-old human rights defender who had travelled from Wajir to Moyale to document human rights abuses by security agents against villagers. The villagers were protesting the sacking of a local chief.

In September, two prominent civil society activists—Maina Kiai, the former head of the Kenyan National Commission for Human Rights and a UN special rapporteur on the rights to freedom of peaceful assembly and of association, and Gladwell Otieno, the director of AFRICOG—were threatened by supporters of the president and his deputy for their role in the ICC cases. A group of youths threatened to burn down Kiai’s rural home while unknown people send messages to Otieno, threatening to kill members of her family if she did not stop opposing the idea of ICC partly sitting in either Kenya or Tanzania.

New laws were introduced that, if enacted, would impose draconian restrictions on the media and on nonprofit organizations, including by restricting the amount of funds that organizations can receive from foreign sources. One such law, the Public Benefits Organizations (PBO) Act, which was passed in January 2013, but yet to come into force, prohibits political campaigning by nongovernmental organizations and introduces stricter accounting standards.

Key International Actors
The United States and European nations continued to call for accountability for 2007-2008 post-election violence and urged Kenya to cooperate with the ICC following the coming to power of the Jubilee Alliance. US President Barack Obama excluded Kenya from his second tour of Africa in June, but relations appeared to warm following the Westgate attack in September, given the increased attention to Kenya’s counterterrorism concerns and role in the region.

The new administration moved to strengthen relations with Russia and China, with visits by President Kenyatta to both countries in August 2013. China approved a development loan of US$5 billion in August 2013 and announced the strengthening of trade ties with Kenya.

Kenya’s engagement with the UN Security Council and the AU have focused on its bid to have the ICC cases terminated, deferred, or referred to a domestic mechanism. Kenya is strengthening relations with the AU member states and members of the East African community in the lead up to the next AU Heads of State Summit in January 2014.

East and Horn of Africa allies—Tanzania, Uganda, Rwanda, and Ethiopia—continue to be important players with regard to Kenya’s anti ICC campaign and, together with Burundi, have all called for the Kenyan ICC cases to be dropped or referred to a domestic mechanism. The ICC’s appeals chamber approved an application by five African countries to be enjoined in the Kenyan cases as friends of the court, in order to provide their views as to whether the deputy president should be excused from appearing in person at trial, an issue currently pending before the chamber.