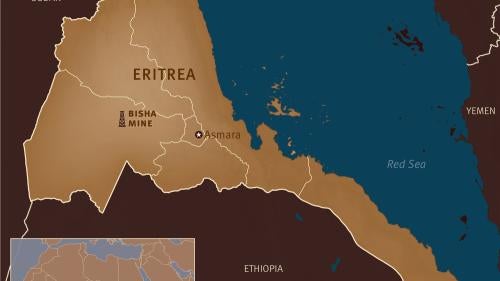 Eritrea is among the most closed countries in the world; human rights conditions remain dismal. Indefinite military service, torture, arbitrary detention, and severe restrictions on freedoms of expression, association, and religion provoke thousands of Eritreans to flee the country each month. Among those fleeing in 2013 were the minister of information—whose 85-year-old father, brother, and 15-year-old daughter were immediately arrested—and the deputy head of economic affairs of the People’s Front for Democracy and Justice (PFDJ), Eritrea’s sole political party that controls most major domestic commercial enterprises.

In October, more than 300 Eritrean refugees drowned when a boat bringing them to Europe capsized near Lampedusa, Italy. According to the United Nations High Commissioner for Refugees (UNHCR), over 305,000 Eritreans (more than 5 percent of the population) have fled during the past decade.

Eritrea has no constitution, functioning legislature, independent judiciary, elections, independent press, or nongovernmental organizations; it does not hold elections. All power is concentrated in the hands of President Isaias Afewerki, in office since 1991.

In a rare sign of domestic dissent, on January 21, 2013, a group of soldiers with tanks, led by a brigadier general and three colonels, briefly occupied the Ministry of Information (“Forto”) and forced the director of government television to read a statement demanding the release of political prisoners and implementation of the 1997 constitution. The transmission was cut after a few sentences and the protestors surrendered when other military units failed to deliver expected support. According to credible reports, 60 or more high-level alleged collaborators were arrested, several of whom are now dead, some by suicide. Among them is said to be Abdella Jaber, PFDJ’s chief administrator.

Despite repeated requests, Eritrea denied the United Nation special rapporteur on Eritrea, Sheila Keetharuth, a visa. In a 2013 report based on refugee interviews, she concluded that “basic tenets of the rule of law are not respected.” Following her report, the Council “strongly condemn[ed]” Eritrea’s “continued widespread and systematic violations of human rights and fundamental freedoms.”

Indefinite Conscription and Forced Labor
Eritrea conscripts all men and unmarried women into “national service.” Although Eritrean law limits national service to 18 months, most conscripts serve for much of their working lives. Conscripts are routinely used as forced labor on essentially civilian jobs. In 2013, Human Rights Watch reported that conscripts were used by a state-owned construction company, Segen Construction Co., engaged by Canadian mining firm Nevsun Resources, to build infrastructure at its Bisha gold mine. Former conscripts described working long hours for minimal food rations, primitive lodging, and wages too low to sustain themselves, much less their families. They were not allowed to leave the work site.

Children as young as 15 are inducted and sent for military training, according to recent interviews by refugee agencies. They and other recruits are regularly subject to violence and ill-treatment for raising questions or for other perceived infractions. Beatings, torture, and prolonged incarcerations are common. Women are subject to sexual violence from military commanders, including rape. No mechanisms for redress exist.

Since mid-2012, all men in their 50s, 60s, and 70s are compelled to perform militia duty: carrying military weapons; reporting for training; and going on periodic patrols.

Arbitrary Arrest, Prolonged Detention, and Inhumane Conditions
Thousands of ordinary citizens are arrested and incarcerated without charge, trial, or opportunity to appeal, and without access to family, lawyers, or independent prison monitoring organizations. While some are freed without explanation and warned not to speak about their detention, most prisoners remain in jail indefinitely. Until the “Forto” incident in January 2013, the most prominent prisoners were 21 government officials and journalists arrested in September 2001 and still held incommunicado 12 years later. None have been formally charged, much less tried; former guards who have left Eritrea report that half of them have died.

Former detainees describe brutal detention conditions. Death in captivity is not unusual. Many prisoners disappear, their whereabouts and health unknown to their families. Former prisoners describe being confined in vastly overcrowded underground cells or shipping containers, with no space to lie down, little or no light, oppressive heat or cold, and vermin. Medical treatment is poor or non-existent. Food consists of a piece or two of bread a day, occasional servings of lentils or beans, a cup of tea, and insufficient water. Beatings and torture in detention are common; wardens are able to impose any physical punishment they devise. A former interrogator told Human Rights Watch he ordered beatings of prisoners until they confessed to whatever they were accused of; they were then beaten to implicate others.

Eritreans who were forcibly repatriated to Eritrea from Middle Eastern countries and then fled again told Human Rights Watch in 2012 they had been incarcerated in crammed cells and beaten shortly after their return. They displayed scars from beatings and electric shocks. One escapee reported that several prisoners in his group of returnees died from their beatings.

Freedom of Religion
Since 2002, the government has jailed and physically abused citizens for practicing religions other than the four government-controlled or recognized religions—Sunni Islam, Ethiopian Orthodox, Catholicism, and Lutheranism. Most arrests occur in private houses but many also occur during private Quran or Bible study at colleges or at national service training centers.

Some prisoners are offered release on condition that they sign statements renouncing their faith. Three deaths during captivity were reported by foreign-based religious monitoring groups in 2013, but given the difficulties of obtaining information, the number may be higher.

The octogenarian Orthodox patriarch, whom the government deposed in 2007, remains under strict house arrest.

Reprisals against Family Members
Family members of some draft evaders or national service deserters have been punished by fines of Nakfa 50,000 (US$3,333) and by detention, in a country with, according to the World Bank, per capita income in 2012 of $560.

Families are also punished when relatives living abroad fail to pay a 2 percent tax on foreign income, retroactive to 1992, or to contribute “national defense” fees. Punishments include revocation of resident families’ business licenses, confiscation of houses and other property, and refusal to issue passports to allow reunification of children and spouses with overseas parents or spouses.

Freedom of Expression and Association
The government maintains a complete monopoly on domestic sources of information since it closed all local press outlets in 2001 and arrested their staff. Telephone and Internet communications are monitored. Eritrea expelled the last accredited foreign correspondent in 2008. Although foreign language transmissions are accessible, the government jammed Al Jazeera in early 2013 and has long jammed overseas transmissions from Eritrea diaspora stations. At least six government journalists arrested in 2009 and 2011 remain in solitary confinement without trial.

Eritrea has been under United Nations sanctions since 2009 because of its support for armed Islamic insurgents in Somalia and its refusal to release Djibouti prisoners of war captured during a 2008 invasion of Djibouti’s border territory.

A UN monitoring group reported in July 2013 that although Eritrea had made a tactical decision to court the Somali government, it fostered regional destabilization by “maintain[ing]close links to a network of warlords and other spoilers in Somalia,” including at least two Al-Shabaab leaders. Eritrea refuses to acknowledge that it holds Djibouti prisoners of war although three escaped in late 2011. Following the report, the UN Security Council retained sanctions and renewed the monitoring group’s mandate for a year.

In June 2013, Canada expelled Eritrea’s Toronto consul for continuing to solicit “national defense” fees (and the 2 percent tax) from Eritrean expatriates despite Canadian demands that he stop because the practice violated UN sanctions.

Eritrea has warmer relations with China. The Chinese government provided a 630 million Yuan ($10.3 million) loan in 2013 to construct canning, food cold-storage, and PCV pipe manufacturing plants. The projects will be run by SFECO, a Shanghai Construction Co subsidiary. SFECO bought a 60 percent share of the Zara gold exploration site near Asmara in 2013 and has contracts to repair and enlarge Asmara’s power plant. Lengthy power shortages occurred in 2013.

In earlier years, Eritrea expelled all nongovernmental aid agencies. In 2013, the UN and Eritrea agreed on a four-year $188 million “cooperation framework.” The UN will provide $50 million and attempt to raise the remaining $138 million from donor countries for capacity building, food security, environmental improvements, and social services. Providing assistance presents “acute coordination challenges,” according to the UN Office for the Coordination of Humanitarian Affairs, because of “access restrictions on international staff” and the “absence of up-to-date information” from the government.

The Bisha mine, a major hard currency generator, was expected to earn less in 2013 as production shifted from gold to copper and copper prices fell. Eritrea issues no budget; government finances are opaque and secret. President Afewerki nevertheless complained in 2013 that “international organization” statistics (ostensibly referring to the World Bank and International Monetary Fund) “are based on speculation and aimed at serving vested political interests” and “should be dismissed.”